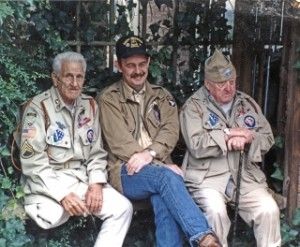 As a tribute to vets everywhere on this Veterans Day, I thought I’d tell you about a video project that you can get involved in with very little effort.

From World War I to the current situation in the Middle East, many U.S. troops are out there with stories to tell of their experience on the battlefield. Some are stories of horrendous images and derring-do, others are stories of compassion or sorrow, while others are of more basic feelings of loneliness, hunger and fear. They all have stories, yet few actually tell their family and friends what they experienced, rather feeling it’s best left behind as they try to get on with their life.

From the Battle of Midway to Iwo Jima, my father told me and my siblings as we were growing up, and then later my son, amazing stories of his time in the navy aboard a tiny gunboat. But, alas, I never thought to record those stories when I got older and became a video producer, and with his passing in 1991 these stories are now lost to legend.

Don’t let the voices of veterans you know be silenced. You can help tell their stories through oral history videos, and get those officially recorded in the annals of the Library of Congress.

A while back, Videomaker was approached by Shirley Bard, an ordinary woman with no video experience who took on an extraordinary task: to learn video production enough to record veterans’ words and burn them to DVD to send to Washington. She told us about the Library of Congress’s Veterans’ History Project, and anyone with a camcorder and a basic knowledge of editing can participate. Find out more on the Veterans’ History Project and get ready to capture some amazing stories, before it’s too late.

Fact becomes history, history becomes legend, unless it is recorded somewhere. C’mon, I challenge you to put your video production skills to work, and do what I could not: give a permanent voice to a vet that will live on in history, rather than legend.