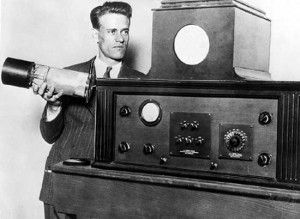 August 19 marks the birth of an important person in TV history, yet very few people would ever know. Philo T. Farnsworth was born in 1906 in Utah and is regarded as the father of television.

When he was just a teenager, Farnsworth came up with the idea of picture transmission while he was a student in high school and later began his research at Bringham Young University.

In 1927, he successfully transmitted an image of a dollar bill that was comprised of 60 horizontal lines and subsequently submitted the first of many patents he would own.
In 1929 Farnsworth created Farnsworth Television and later Farnsworth Radio and Television in 1938.

Among the 165 patents he held were those for many electronic devices we use today including amplifiers, cathode-ray and vacuum tubes, and electrical scanners.

As a pioneer in the development of television, now a multi-billion dollar world-wide industry, Farnsworths life, regrettably, is just a footnote in some archaic history tones, yet he should be as well known as inventors Thomas Edison, Ben Franklin and Albert Einstein due to the expansion of his vision.

Imagine it: in just 100 years, from when he first conceived of the idea of picture transmission to today, where we can dial in a satellite in space to see our live football playoffs on a near-perfect imaged hi-def TV, television has made such a strong imprint in the American household that the government was giving money to people to upgrade their antiquated system just a few months ago.

For any of you that have kids in school who are getting ready to write a boring report on some faceless unknown character in history, steer them towards Philo Taylor Farnsworth. Show them that he had a real life, like theirs, and while in only high school, created something that would change the world. Ill bet both the kids and the teacher will be impressed to hear about this little known historical fact.

Sadly, while thousands of people grew rich in the technical and visual production, distribution, and sales of television, Philo T. Farnsworth was plagued by money problems his entire life, fighting to hold claim to his patent, and died in 1971 in Salt Lake City. His wife spent the rest of her life continuing the battle.

In 1999, TIME magazine included Farnsworth in The TIME 100: The Most Important People of the Century and Popular Science called him “one of the ten greatest mathematical wizards of the day”.

Book: The Boy who Invented Television