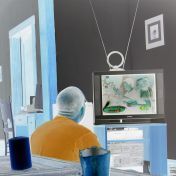 The DTV hoopla has lost most of its thunder when the change-over date was changed once again, but this time its happening for sure… (so they tell us) and soon (so they tell us.)

The last chance for your off-air broadcast station to change from analog to digital signal will be June 13. If youre not ready, on the 14th youll be watching snow. Of course, were video producers, so we stay up with the latest technology, but for those who get to play tech support for family and friends, you might want to copy and paste this story for them.

We spotted a Consumer’s Reports story from Consumers Union a while back about how some cable TV companies are trying to take advantage of the confusion going on over the DTV conversion. Consumers Union, the parent company, writes that some programs viewers enjoy on their usual cable tier are being scrambled and placed on a higher tier, requiring viewers to rent set-top boxes for every TV in the house to watch them.

The CR report goes on to say that the digital TV transition change affects only those that are watching TV via an antenna only, and that this is a deceptive excuse for a rate hike. The story adds, If the cable company says the channel changes are due to DTV conversion mandated by the feds, notify your states attorney general. Theyre not. (Consumers Reports, November 2008).

The official FCC website states: As of June 13, 2009, full power television stations will only broadcast digital, over-the-air signals. Your local broadcasters may make the transition before then, and some already have.
If youre wondering how the digital change will affect you as a video producer, read our feature, Digits Over the Air, the end of analog broadcast, on page 38 in the January 2009 issue.

Meanwhile many TV viewers still dont seem to get it, according to a FCC press release issued a few days ago. Just this past week, 55,000 people have tried to contact the FCC 800 helpline for support. Read the full report here:

Washington, D.C. A coordinated nationwide soft test designed to encourage consumers to take immediate action to prepare for the June 12 digital television (DTV) transition prompted a single-day record of 55,000 calls to the Federal Communications Commissions national help line Thursday. Prior to the soft test, on average the Commissions help line had received approximately 15,000 calls per day since May 1.
More than 125 of the nations broadcast markets participated in the soft test, including at least one station in each of the top 30 broadcast markets. During the test, affected viewers were directed to call the FCCs national toll-free help line, 1-888-CALL-FCC, if they needed assistance in preparing for the impending termination of analog service.
The most common issues raised by consumers who spoke with an agent included the following:
1. Seeking information about the governments program providing $40 coupons for the purchase of DTV converter boxes (51%);
2. Expressing concern about reception issues in their area (15%); and
3. Needing instructions to install a digital converter box (10%).
The Chicago media market generated the highest volume of calls 1,310 followed by the New York media market with 1,277 calls and the Dallas-Ft. Worth media market with 764 calls. A complete list of the markets posting the highest number of calls to the help line can be found at the FCCs on-line media tool kit at http://www.dtv.gov/media_toolkit.html.
This soft test did exactly what it was supposed to do, said Acting FCC Chairman Michael Copps. It was a wake-up call for consumers who are unprepared, alerting them to the fact that they need to take the necessary steps before the June 12 DTV transition.
The FCCs help line provides consumers with a wide range of services, including instructions on how to install converter boxes and information on local DTV education events and the availability of in-home installation services. In addition to calling the FCCs toll-free help line, consumers can find help at the FCCs web site, www.dtv.gov, and by visiting walk-in help centers being set up across the country or attending a DTV transition event. Information about local events also can be found on the web site.
A soft test simulates to a degree what unprepared viewers will experience when the DTV transition occurs. Instead of completely cutting off the analog signal, during a soft test broadcasters interrupt the regular programming of viewers receiving analog signals to warn them the interruption indicates they are not prepared for the transition. Such viewers other than those connected to a subscription TV service such as cable or satellite (which in some cases still utilize a broadcasters analog signal) must take immediate action to avoid a complete loss of service on June 12. Digital broadcasts are available now and are not interrupted by soft tests.
Nationwide, Nielsen estimates that about 3.3 million households 2.9 percent of U.S. households with TVs remained unready for the transition as of May 10. In the few weeks remaining before the transition, the FCC is gearing up its ongoing consumer assistance efforts to ensure consumers are prepared for the end of analog broadcast service for full-power television stations.
The switch to digital will reward most viewers with better sound, a better picture, more channels and more programs and will make room for the future by clearing airwaves for advanced mobile Internet services. The transition will also help save lives by freeing up airwaves for better first-responder radio service.
-FCC- Information about covering the DTV transition can be found in the FCCs Media Tool Kit at http://www.dtv.gov/media_toolkit.html.