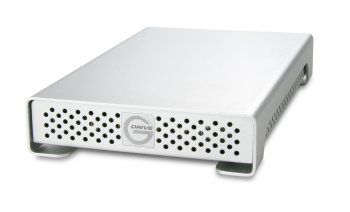 G-Technologies was busy this NAB introducing a new drive and updating a few others. The new G-RAID Pro drive is a triple interface (FW 800, FW 400, USB 2.0), RAID 0/5, 4-slot hot-swappable hard drive with up to 4TB of capacity. The G-RAID Pro will be available in June for $999 (MSRP).

The G-RAID mini 2 (pictured above) improves upon the previous model by offering both RAID 0 and RAID 1 configurations. Now, the choice of performance or data protection is yours. The G-RAID mini 2 also features an eSATA connection rounding off it’s impressive set of connectors. Capacities include 500GB, 640GB, and 1TB. The G-RAID mini 2 ships in June starting at $599 (MSRP).