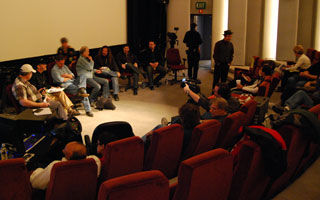 Videomaker attended the “New Technologies for Acquisition and Distribution” panel at the Tiburon International Film Festival this weekend. In an intimate setting at the George Lucas Theater at Kerner Optical, the panel discussed recent and future trends in imaging technology, and online distribution. The panel was moderated by producer Robert Render Harrison.

The event was led off by Bradley Nelson of Kerner Optical, who showed a demo of stereoscopic (3d) television, for gaming and movies. Nelson went on to describe some of the technical challenges and new parameters to keep in mind when adding a third dimension to your films.

Next up was Ted Schilowitz from RED, who brought some beautiful sample footage to show that was shot with the RED One, and described the process and workflow involved in shooting with their digital cinema camera. Though I tried to pump him for details on their upcoming “scarlet” camera, alas more information will have to wait for NAB.

Also on the panel was realist video director Rob Nilsson, who showcased scenes from a few of his recent works, shot in DV on a Sony PD150. Nilsson has embraced the video aesthetic, and instead of trying to make the image more film-like, the raw video look tends to support the “reality” of his works.

Adrian Belic, a documentary filmmaker known for his film Genghis Blues, was in attendance, and showed us a bit of his new work Beyond the Call. His discussion touched on issues regarding the size and amount of equipment needed to successfully shoot in war-torn and sensitive areas. He on his recent shoot he claimed to have carried three days worth of battery power for his equipment, but only two days of food!

Some sample footage was then projected, showing off the capabilities of the Sony EX1 and the Sony HD350 camcorders. The 2k projection was analyzed by the cinematographers and the audience for detail, compression, and a host of other technical specifications.

After the panel there was a chance to see the camcorders in action, and try out various offerings from Sony and Red. It was a great chance to mill around and talk shop with professionals and enthusiasts about the state of camera technology.