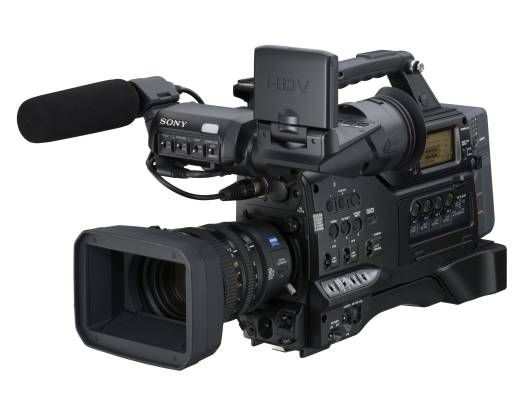 Sony's Broadcast division announced two new HDV camcorders and a new HDV/DVCAM/DV deck as well. These new camcorders are totally pimped-out with all sorts of bells and whistles that shooters will enjoy. Let's dig in.

The Shoulder-Mount HVR-S270U HDV Camcorder Go big or go home, right? We think that's the philosophy here as the Sony HVR-S270U takes the form of a big, professional style camcorder that has authority. The HVR-S270U HDV camcorder records in 1080i or 1080p HDV, DVCAM and DV. The 1080p variety comes in at 24p or 30p frame rates and is recorded to tape as progressive. With the three ClearVid 1/3" CMOS sensors we suspect the image quality will be notable. Also, the HVR-S270U is an interchangeable lens system, shipping with a stock 12x Carl Zeiss lens. An optional 8x Carl Zeiss wide-angle lens and a Sony SLR adapter adds to this camcorder's versatility. The Sony HVR-S270U HDV camcorder is also packing some heat with a HD-SDI (and SD-SDI) output. Additionally, it will accept standard-size cassettes allowing shooters to capture up to 4.5 hours on select Sony tapes. The Sony HVR-S270U HDV camcorder will be available in February for $10,500 (MSRP). Well, it looks like Sony is going to give Canon's XL-H1 a healthy dose of competition. There are quite a few more features on the Sony HVR-S270U (and the handhel HVR-Z7U for that matter) that give it a competitive edge. Sony has an optional memory-recording unit that attaches to camcorder (nothing too new here), an accessory charger that has four battery slots (nice touch) and an impressive simultaneous CompactFlash card record mode. This last particular feature caught our attention. As you're recording to tape you can also record your choice of 1080i HDV, DVCAM, or DV to CompactFlash. With Sony's Professional CompactFlash cards you can put up to 72 minutes on a 16 GB card. Who needs to downconvert when you can record simultaneously to DV? This is definitely a feature worth learning more about in a future review from us. Again, this feature is also available on the less-expensive, handheld version, the Sony HVR-Z7U HDV camcorder.

The Handheld Sony HVR-Z7U HDV Camcorder In comparison to the previously mentioned HVR-S270U camcorder, the HVR-Z7U is basically the smaller, lighter version. With the HVR-Z7U, you won't find HD-SDI, nor will you be able to use the standard-sized cassettes. That said, we're delighted to see that the Sony HVR-Z7U HDV camcorder also features an interchangeable lens system, the 1080p capability and the simultaneous recording to CompactFlash. This is one of the first handheld prosumer camcorders featuring a interchangeable lens system with a stock lens that is fixed-gear and not the typical servo controlled lens. This is quite an improvement in tactile control, offering shooters a level of precision that's hard to achieve on servo-based lenses. The HVR-Z7U HDV camcorder also features XLR-inputs and manual gain control for channels 1 and 2. Sounds like it could be a serious contender. The HVR-Z7U HDV camcorder we be available in February for $6,850 (MSRP).