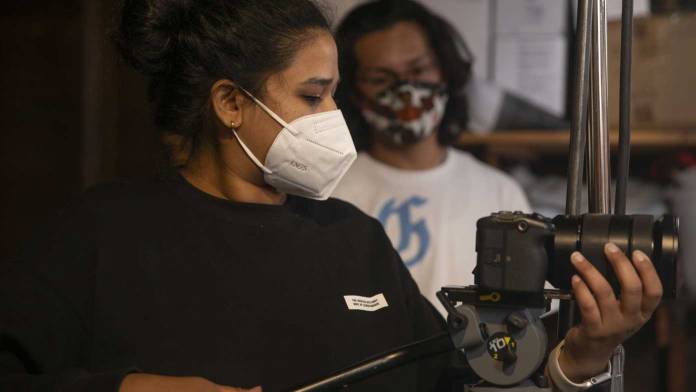 Cinematographer Vatsala Goel travels across the US to capture honest, slice-of-life stories. Based in Los Angeles and San Francisco, Goel brings compelling documentaries like “Aggie” and gripping narratives such as “Blood and Glory” to fruition. She draws inspiration from everyday people with all their complexities and vulnerabilities.

“I want to capture, evoke and convey these delicate moments in the form of a sincere story,” Goel says.

With over ten years of experience, Goel’s work has played at Sundance and the Museum of Modern Art and on platforms like Netflix, PVS, CBS, and ABC. Her work has reached and inspired many. Sharing impactful stories with the rest of the world is what matters most to her.

“The best moments for me are when I feel like I have given my absolute best to a story and I can inspire others around me to do the same.”

To do her absolute best on the job, Goel needs reliable gear that’s easily accessible and ready to use at any time. Her time with the Sony FX3 gave her the flexibility, portability and image quality she needs to share the moments in everyday life that often go unseen.

Who is Vatsala Goel?

“I was fortunate enough to be in one of the last group of cinematography students who were trained first to film on celluloid – exposing 16 and 35 mm film – before picking up digital cameras.”

Goel often visited the school’s National Film Archives library. Here, she viewed films from around the world shot on 35 and 16 mm prints. “This really helped complete the visual loop in our minds as DP’s,” Goel says. “Watching the works of cinema masters on print over the years trained the eye for detail and rigor. This was an incredible foundational experience for me.”

Music and photography are two huge inspirations for Goel. Some of her influences include Mira Nair, Abbas Kiarostami, Kieslowski, Emmanuel Lubezki and Julie Delpy, all of which incorporate deep, lyrical elements into their work. Their works inspire Goel to push the boundaries of what it means to be a Director of Photography.

“They constantly push me to do better.”

Ultimately, Goel wants her work to inspire others to live to their best potential as her inspirations do for her. To her, it’s important to strive to do your best because what you do can affect the people around you in a positive way. Recently, at the end of a long, difficult schedule, one of Goel’s crew members expressed how inspiring she was by how she owned her role on and off set.

“It reminded me that unknowingly we can affect other people’s experience,” Goel remembers. “That felt good.”

Experience from around the world

Having grown up in India and later moving to the United States, Goel has first-hand experience working in different cultural film industries. While there’s some overlap between the two industries, there are some key differences.

Goel finds the United States tends to use an owner-operator market structure. In India, most productions work with rental houses to acquire gear.

Additionally, in India, several languages are spoken in each regional film industry. “Each tool and technique has multiple names they’re referring to,” Goel explains. “The US predominately speaks English, so the gear and techniques are universally called the same thing across the country.”

Here, experience working in different industries helps her quickly adapt to new environments and fit right into her role on set. Now living in the United States, Goel travels between Los Angeles and New York for work. Traveling as often as she does takes a lot of preparation.

Goel always figures out how she’s going to sleep before traveling.

“A good night’s sleep is so important for good work the next day,” Goel says. “Sleep gear is of utmost importance – eye mask, earplugs, face and hand creams, melatonin, favorite neck pillow.” She tends to pack light, though she always brings all her essential gear, like her camera, support equipment, and drip coffee filter. She’s also a vegetarian, leaning vegan, meaning it’s sometimes hard to find a vegetarian option. “When traveling in America, outside the big cities, it is a bit harder to find vegetarian options,” Goel admits. She usually looks up restaurants in the area before she travels. It’s a lot to plan, but Goel manages it well.

However, the last year forced Goel, like many others, to change their plans. As the pandemic shut down production in LA, she relocated to the Bay Area. During this time, her directors were stuck on the east coast while their productions were on the west coast. Productions needed Goel to take on roles that went beyond her skill set as a Director of Photography.

“Since travel was prohibited, I was directing and field producing for directors on the east coast alongside being the DP on the job.”

In the end, she made the best of the situation and took away new additional skills to add to her repertoire.

Working as a professional cinematographer

To Goel, her role as a cinematographer ultimately means it’s her job to realize the director’s vision. At the start of all her projects, she collaborates with the director and producers to understand what they’re looking for.

“I like to work really closely with the director on the details of scenes, to see how we can make everything feel intentional and integrated with the story we’re telling. It is a very organic and fluid way of collaborating,” Goel says. “I usually ask my directors and producers questions about their creative vision, budget and schedule and that leads to the approach of what we collaboratively aim for.”

She then likes to work with the director to develop a unique, stylized visual aesthetic.

“Making stylized images is fun and it pushes us all artistically and technically, making the entire process of filmmaking more interesting, playful and memorable,” Goel says. However, Goel never puts style over narrative.

“In the end, style is always in service of the story.”

She usually reads the script a few times, allowing her to experience it how the audience will. The initial readings help establish an emotional connection to the characters and plot. After a few reads, she breaks break down the script by characters, locations, times of day and lighting conditions.

“This gives me a sense of the logistics – how scenes, locations and cast can be grouped and inform the filming schedule.”

When working on “Blood and Glory,” Goel and her director worked closely to drive forward the two main characters’ struggles and unwavering friendship.

“A lot of the work that went into ‘Blood and Glory’ was done prior to the actual shoot,” Goel says. “The director and I worked closely in prep looking at other films and photography as reference for tone, putting together the color palette, and making photo storyboards from images shot in the scout.”

“Doing a solid tech scout of the location with my gaffer was really instrumental in creating the lighting plans and figuring out how the camera would move in particular moments and spaces,” Goel says.

Goel always felt personally connected to dramatic narratives like “Blood and Glory” with a hint of comedy. “I love working on narrative projects and am generally drawn to stories in the poignant dramatic comedy space as they seem closest to my lived experience,” Goel says. However, she’s happy to take on any genre “I’m intrigued by genres I haven’t naturally gravitated towards in the past,” she says. Goel finds genres like horror, science fiction, and fantasy to be very intriguing even though she doesn’t have much experience with them. “They are exciting because they expand my creative imagination and push me to think outside my comfort zone.”

Looking forward, Goel hopes to work on more scripted episodic projects. They excite her because they allow her to dive deep into a character’s arc and flesh out their stories. The more time she has with the character, the more their stories have an impact. She also loves connecting with her coworkers and deepening relationships on set.

More recently, Goel dabbles in fields outside of cinematography, such as directing and screenwriting. Though she is still new to those roles, her experience as a cinematographer helps her envision the project on a practical level. “I am aware of the real labor, time and money it takes to pull a scene or day together,” Goel says. When writing scripts, she tends to detail out those specific dimensions in the story.” Currently, she’s working on “Home is Here,” where she’s both the writer and the director of the project.

She’s also very involved in post-production. “Typically, I like to be involved in the color grading stage and work closely with the color house,” Goel says. She helps the colorists by discussing what she was considering while filming each scene. “Many of the cinematography considerations and decisions made during filming inform the grade and information that can be helpful for the colorist.”

She works with colorists in person. However, whenever direct collaboration isn’t possible, she sends over reference frames she’s graded herself. She also leaves notes to help the colorist.

Goel’s years of experience allowed her to operate many cinema cameras. The cameras she uses need exceptional image quality and portability, so it’s easy to carry on set and while traveling. Having spent some time with the FX3, Goel found the camera extremely easy to integrate into her workflow.

“It’s compact, light, customizable, and very easy to use. I love carrying the camera in briefcase mode, and the new top handle grip let me do just that with a lot of ease,” Goel says. “It’s small! And so light! It can easily fit in a (camera) backpack and go on the inflight carry-on bag. Great for both domestic and international travel.”

Also, the Sony FX3 delivers the image quality she expects out of her cinema camera.

“[It] packs a punch with regards to image quality it delivers.”

Goel had the opportunity to use the camera during an outdoor shoot. She was working with a small crew, so she had to experiment with the setup. The FX3’s versatility allowed Goel to capture the shots she needed to complete the project.

“I can already see so many opportunities to use the FX3 – especially on my documentary shoots as B/ C cameras paired with a larger Sony camera or even as an A camera.” Goel also sees the camera working well in her impromptu experimental film collaborations. In these collaborations, it’s important the gear doesn’t overwhelm the surroundings. The FX3’s compact body allows Goel to keep the area open and still capture a great image.

“I would highly recommend it to other DPs, especially if you’re looking for something light and small,” Goel says.

After traveling the world and working in many different sectors of the film industry, Goel’s experience as a cinematographer is like no other. She’s passionate about documenting the world around her, bringing light to real-life stories of people and their daily struggles. With gear like the FX3, she goes where she needs to go and tells these stories without anything keeping her from telling the story she sets out to capture.