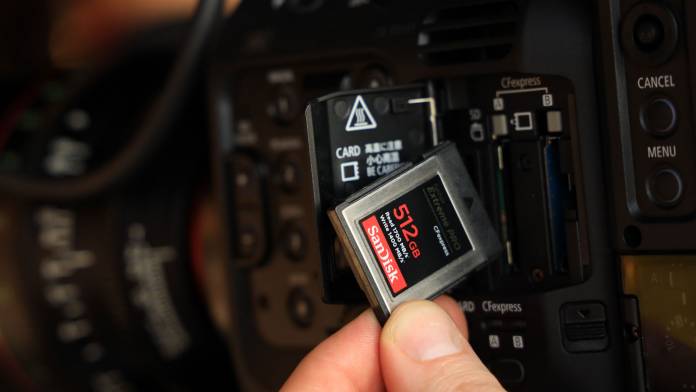 When you choose SanDisk, you are choosing one of the trusted leaders in the memory card industry. We can see just that when we take a close look at SanDisk Extreme PRO CFexpress Cards.

But recording large video files isn’t the only thing that CFexpress offers.

Cameras today are shooting at much higher resolutions than they were just a few years ago. 4K is currently the standard capture resolution for the professional industry. We also now have the capability to shoot at 6K and even 8K resolutions.

However, as the camera shooting capabilities increase, so do the video file sizes. To keep up with the demands of the latest pro cameras, SanDisk built their SanDisk Extreme PRO CFexpress Cards. CFexpress can record media at high resolutions without suffering from long read and write times. With CFexpress, the Canon C500 Mark II and 1DX Mark III can do even more.

Different capacities to choose from

Not everyone needs huge card capacities. Picking the right capacity for your needs can end up saving you a lot of money. SanDisk offers multiple capacities for the SanDisk Extreme PRO CFexpress Cards, including 64GB, 128GB, 256GB, and 512GB. You can pick whichever capacity best fits the work that you do while staying on budget.

Speeds that lead the market

To compare, the SanDisk Extreme PRO CFexpress offers read speeds up to 1700MB/s and write speeds up to 1400MB/s. Higher read and write speeds will allow you to capture more high-res footage without waiting a long time for those clips to be stored to the card. That gives you more time and confidence when working with high-res clips.

The SanDisk Extreme PRO CFexpress Cards promise many other benefits, as well. First, you will notice low latency during high-speed recording. This will speed up the entire recording process, leaving no delay between recording and storing. This in turn allows for smooth RAW 4K video capture performance that’s sustained through the entire capture. You can record in high resolutions and still get the performance you need and expect out of your media card.

The SanDisk Extreme PRO CFexpress Cards additionally support backwards compatibility with a number of XQD cameras. That means you have a lot of flexibility when it comes to which camera you use.

Finally, SanDisk RescuePRO Deluxe Recovery Software is included. This software can recover images, video and other kinds of digital media. So if something goes wrong, you can use this software to recover your lost footage. Additionally, SanDisk will offer you a limited lifetime warranty for the device. With these assurances, you can shoot and store high res clips with peace of mind that your card is covered.

CFexpress delivers a brand new form factor in recording media. With read speeds up to 1700 MB/s, the SanDisk Extreme PRO CFexpress Cards surpass any speed previously offered with a SanDisk Memory Card. When using SanDisk CFexpress cards, you are using a card from one of the most trusted leaders in the memory card industry.

With CFexpress, you will be able to shoot high res footage on today’s camera and store that data on a reliable storage device. There is also flexibility when choosing the capacity that works best for you and your budget. Plus, you get peace of mind with RescuePro and a limited lifetime warranty.