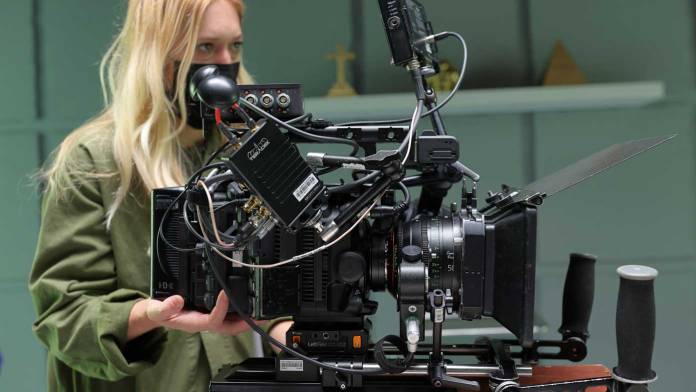 Cristina Dunlap has been using Canon cameras and lenses for years. She has always been a fan of Canon and consistently uses their gear for shooting stills. On her most recent project, a narrative short called 5150, Dunlap used Canon cinema gear, including the beautiful Sumire Prime lenses and an EOS C500 Mark II camera.

5150 is a story ripped from the headlines, about the power of modern celebrity in our culture and the complexities of race in America. Jovan Adepo, known for his Emmy-nominated performance in Watchmen, stars as the lead role of Celeb, a world-famous entertainer who is confined to a mysterious psychiatric facility after his erratic behavior and controversial political statements. Co-written and directed by Denzel Whitaker and executive produced by David Oyelowo, the film is slated to have its festival premiere in Spring 2021 and was produced by 4WT Media as a proof of concept for a television series.

Dunlap co-writer and producer, John Trefry, was a longtime Canon user for commercial and documentary projects but never considered the brand for narrative until seeing the C500 Mark II at Sundance. Because 5150 required a mashup of various cameras from a storytelling perspective, Trefry presented Canon as a camera platform with multiple formats that could be used by the production and the team decided to move ahead.

“Canon felt like a good fit as well because this film called for a lot of different types of cameras,” says Dunlap. “Because we wanted the montage sequence to actually be shot on mixed media with a variety of formats and Canon had so many options to ofer in both lenses and cameras. Instead of trying to degrade the opening montage footage and put filters on in post, we were actually able to shoot it on a variety of Canon cameras from DSLRs, to camcorders, and even some security cameras. It was a huge help and provided us a lot of versatility.”

One of Dunlap’s major deciding factors when picking the Sumire Prime lenses was the character they gave the image. “There is a beautiful falloff and a lot of character to the Sumires,” says Dunlap. “There’s a very drastic difference between a wide-open lens at F1.3 and even just stopping down to F2.”

For most of the film’s scenes, Dunlap often opted for the primes. “The Sumires made for beautiful portraits and close up shots,” Dunlap notes. She used Canon’s cinema zooms frequently during the opening montage of the film. They were used to recreate the feeling of a paparazzi camcorder. Additionally, she used the scenes where she wanted the main character to feel like he was being watched or trapped.

“For our last shot in the movie there is a reveal which I don’t want to give away, and being able to use the zoom in combination with the dolly provided me the leeway to get the exact framing and movement that I wanted.”

How Dunlap used the lenses when shooting 5150

To her, the look of the lens was very unique and gave her project a visual style that helped push the film’s narrative forward. “The look of the Sumire Primes is very unique. I have always been a big fan of the Canon K-35 lenses and I can definitely see some similarities in these,” Dunlap says. “Shooting wide open creates a very dreamy effect that draws the eye in. They have a lot of character and are great for drawing the audience’s eye toward specific details because there is such a smooth fall-of.”

With the broad focal range of Canon’s cinema zoom lenses, Dunlap was able to use them to visually invoke a particular emotion in the project’s main character. Dunlap wanted to create a claustrophobic feeling for the film’s main character, Celeb.

“The Cine Zooms were very helpful for shooting 5150 because it allowed us to create the feeling of Celeb being closed in on. There were many shots where he is stuck in the cell and we wanted it to feel suffocating or like he was being watched. The zooms helped us achieve this feeling,” Dunlap says.

When signing onto this project, Dunlap was most drawn to the humanity of the characters. She feels that film can create patience and understanding by exposing the audience to situations and emotions they may not have experienced otherwise. “I think I’m most drawn to stories that are honest about what it means to be human, even if the setting is totally fantastical as long as the characters are relatable and real,” claims Dunlap. “That’s one of the things that I loved about using the Sumire Prime lenses on 5150. They are really good at drawing the eye in and making you feel connected to a character on screen. I’m really honored to have been a part of bringing this story to life and to have had Canon backing us up.”