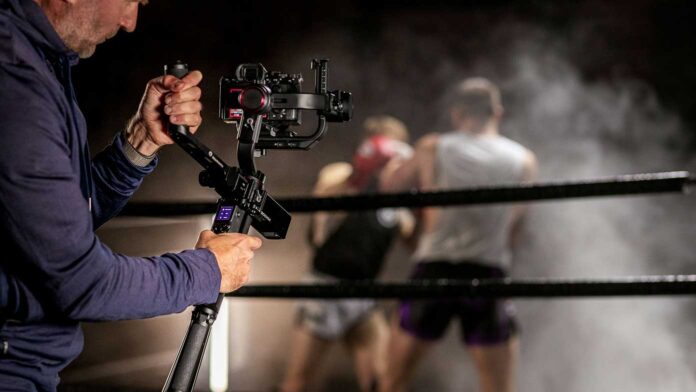 In this article, you’ll learn about the new Manfrotto Gimbal 300XM. It has a unique design made for modular setups, making it a flexible tool to use. We’ll go over its configurations and how you can expand it with the Manfrotto Move Quick Release system.

Imagine this: you are shooting a wedding and you have been following the wedding party down the aisle with your mirrorless camera and handheld gimbal. You are at the end of the aisle when it’s time for the bride. However, everyone stands up as she walks and you no longer have a view of her. What do you do? If you have the new Manfrotto 300XM gimbal, you can connect it to the Manfrotto Gimboom via the Manfrotto Move Quick Release system. You can then continue your stable shot from a higher vantage point.

With the Manfrotto Gimbal 300XM, you can go between shots faster and create at the speed of inspiration. The 300XM is the first modular stabilizer designed to radically speed up your flow onset. The Move, from shot to shot, is quick and allows you to create your favorite configuration with its modular design. Its detachable handle lets you use the gimbal in many configurations and remote control via the detachable handle or its dedicated app. The 300XM works seamlessly with the most popular compact system cameras and DSLRs on the market. With a max payload of up to 7.49 lbs (3.4 kg), videographers have the means to build whatever setup they need. It’s not just a simple gimbal; it’s a remote head as well. Its remote handle and motors can work separately.

More than just a gimbal

The Manfrotto 300XM is compatible with the Manfrotto GimBoom collection and supported in the Manfrotto Move System. This means you can connect the 300XM to the Gimboom for a jib or boom shot and then quickly switch back to the handheld gimbal. Along with that, the 300XM has enhanced electronics over previous models. It has software improvements like motion presets and increased operating sensitivity. It even has a multifunctional knob for greater control. Plus, you can play with the axis’ movement to work with different curves.

The 300XM has full compatibility with a wide range of Manfrotto products. This is thanks to its 501PL STD profile and the ⅜ inch standard thread. The camera sliding plate attachment and gimbal motor’s structure feature a 501PL standard profile — bringing extra versatility to different Manfrotto supports. The 300XM also has a secondary battery. Both the handle and gimbal have internal batteries and can operate independently. When used together, you get a long battery life of up to 10 hours. It has multiple charging options too. Recharge both handle and gimbal at the same time or separately. It has balance position memory red dots on both vertical and cross arms for a quick camera setup next time. Its LCD touchscreen and joystick make it an easy gimbal setup, either with or without its smartphone app. It even has a detachable mini tripod for easy setup and safety.

Flexibility to get moving