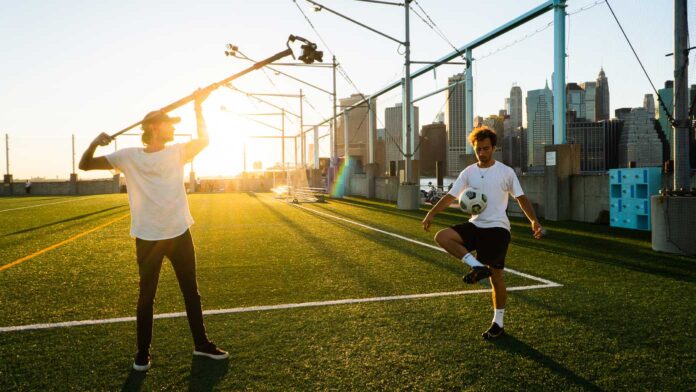 Around these parts, it’s universally accepted as fact that drones are just awesome. However, there are certain situations where drones may not be ideal, or simply not the best tool for the job. Infact, there is a current trend of making fake drone shots with DIY solutions. In this article we’ll discuss how to get drone-like shots without the hassle of a drone and why the Manfrotto Gimbal and GimBoom system is a great solution.

Situations where drones are not the right tool or not allowed

Let’s set the scene. Say you find yourself shooting a wedding and need to capture a shot that would typically require you launching your drone into the air to get. However, the buzzing of a drone is most likely too distracting for an event like a wedding, not to mention the potential safety concerns that come with operating a machine over a crowd of hundreds of people. Instead of getting your drone airborne, Manfrotto’s Gimboom can help you get that same shot faster without even taking your camera off the gimbal.

Weddings are just one example, of course. The GimBoom is a solid option for any time you want a quick shot with a different perspective, but don’t have the ability to break out your drone to get it. Maybe you’re in an area where drones aren’t allowed, or maybe the production you’re working on can’t afford the additional production time.

Additionally, if you don’t yet own a drone, the GimBoom means you won’t necessarily need to set aside the budget to invest in both it and the liability insurance you’ll need to fly it. Essentially, the GimBoom is an effective way to offer drone-esque shots without having to navigate a drone-esque price tag.

Drone shots without the hassle

Connecting to the bottom of a one-handed gimbal like the Manfrotto MVG220 or MVG460, the GimBoom extends the reach of your camera. Let’s go over all the shots where drones could certainly be used, but where the Gimboom might be a better choice.

A follow is as it sounds – you follow a subject. This incorporates a different perspective compared to how we see the world. An example of this kind of shot could be following a bride down the aisle during a wedding, or chronicling a character as they walk through a scene in a film production.

Low to high (high to low)

Low to high or high to low is a typical boom/jib shot. The camera goes from very high to very low, or vice versa. A great way to pull off this kind of shot is to put something in front of the starting point of the shot to reveal the setting.

This is a shot over the top of a subject, but looking straight down on it. An instance where you’re hoping to showcase a delicious plate of food, for example, would be a great scenario to implement an over-the-top shot.

A fly-through is where the camera goes through an object. This is a forward or backward movement going through some kind of frame. A simple example of when this kind of shot is typically used would be when following a subject as they move from inside to outside through a door frame.

In a nutshell, the pedestal shot is a rise or fall of the camera from a static position. The up and down movement gives the shot dynamics without getting closer to the subject by changing the focal point.

A high pan is just a pan in the air for a higher perspective, either turning from left to right, or right to left.

The Manfrotto Fast Gimboom and Gimbal series were chosen as the TIPA’s pick for best gimbal system.

The Manfrotto Fast GimBoom Carbon Fiber (MVGBF-CF) extends the reach of a gimbal so that the camera can reach a higher and different perspective. It allows for stable shots because of the attached gimbal. It is designed for Manfrottos 220 and 460 Manfrotto Gimbals, but also adaptable to most gimbals on the market that are equipped with either a 3/8” or a 1/4” thread at the base of their handle. Plus, it has a payload of up to 14.3 pounds and uses Manfrotto’s FAST twisting lock technology to extend length with a single hand for quick use. The GimBoom fully extends to 42.27 inches, weighs just 1.76 pounds and is built from carbon fiber.

All Manfrotto gimbals are independent locking: each axis is equipped with a lock. They have a quick installation system without levelling. They also have different modes that include: TikTok Portrait, Selfie, Inception or Time-lapse.

The MVG220 is a professional 3-axis gimbal that can hold up to 4.85 pounds. It is a good fit for small-to-medium sized mirrorless cameras, and comes with a detachable handle that is handy for switching to a different shooting option.

In addition to the standard Manfrotto gimbal features, the MVG460 is a professional 3-axis gimbal with a weight capacity of up to 10.1 pounds. It’s a good fit for heavier setups.

The next time you need a shot that a drone can get, ask yourself: do you really need to use a drone, or could it be easier if you could do it without the hassle? That’s where Manfrotto’s Gimbal & Gimboom system comes in.