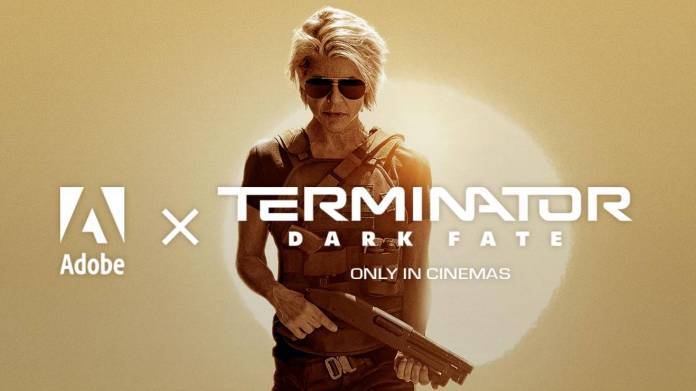 In 1984, a young director stepped behind the camera to create an original sci-fi action movie about time-travel, cyborg assassins, and a woman who gives birth to the savior in the future war against the machines. The Terminator was a runaway hit, popular with audiences and critics alike. The movie launched the career of James Cameron and kicked off a multi-billion-dollar franchise that expands across film, television, comic books, video games, and theme park attractions.

Thirty-five years after the original movie was released, the series is still as popular as ever. Terminator: Dark Fate picks up in present day after the events of Terminator 2: Judgment Day, with Linda Hamilton and Arnold Schwarzenegger reprising their now iconic roles. James Cameron is coming back to the franchise as a producer and writer and stepping into the director’s role is Deadpool director Tim Miller. Skydance’s David Ellison produces.

Miller’s debut feature film was edited on Adobe Premiere Pro after a strong recommendation from Gone Girl director David Fincher. Miller and his editorial team knew that Premiere Pro and Creative Cloud were the only choice for the incredibly demanding editing and VFX workflows behind Terminator: Dark Fate.

From unknown artist to Hollywood director

One of the reasons that Miller insisted on working with Premiere Pro is his long history with Adobe, which began decades ago. Before he became a director of Hollywood blockbusters, Miller was an unknown animator and visual effects artist. Much of his day was spent working on Adobe creative solutions.

Even then, Miller always leapt at the chance to interact with Adobe product teams. He signed up to become a beta tester, and he shared ideas of features or tools that he thought could help him work more efficiently or create something new.

“People may think that Adobe only listens to me because I’m working on a big movie, but I had that same level of connection even when I was just a dude with a computer,” says Miller. “Adobe’s goal is to make the best tools for the artist, and my goal is to have the best tools available. So I’m a big fan of working with a company like Adobe that actively asks for your feedback. Everyone benefits.”

Back and better than ever

Thanks to the partnership with the Adobe Premiere Pro team, the editing workflow has only gotten better since Miller directed Deadpool. Shared Projects offers rock solid collaboration making it easier for multiple editors to work together.

“If you’ve ever worked on feature films, you know that the assistant editors end up spending a lot of their time on housekeeping tasks, like organizing clips into the right bins,” says Miller. “Adobe Premiere Pro is very good at helping us automate and streamline those tasks so that our assistant editors can spend more time working on the actual edit.”

Another reason that Premiere Pro was the best choice for this film is its seamless integration with Adobe After Effects. Every movie has visual effects, whether it’s adjusting lighting to create a night shot or replacing the background in a scene. But with a sci-fi action movie like Terminator: Dark Fate, the number of visual effects grows exponentially. Miller and his team handled post-vis temp visual effects in-house using After Effects to make sure that shots worked before sending them to more costly visual effects vendors.

“You can have people working in Adobe After Effects and feeding it back into the edit in a way that’s organic and doesn’t waste a lot of time,” says Miller. “It makes the edit very quick and easy.”