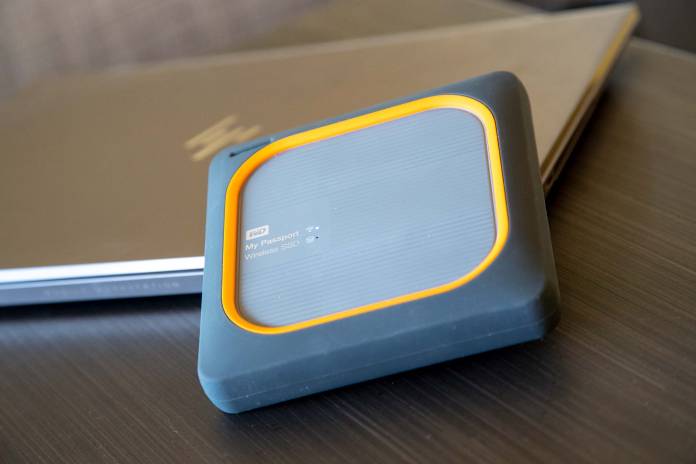 You’re on a location and you fill up your SD card, but you still have two scenes to shoot. You don’t have your computer. What do you do? The WD My Passport Wireless SSD is designed for these situations. Unfortunately, it isn’t so great for those who shoot high bitrate video.

For this review, we tested the 2TB option, though this drive is also available in 250GB, 500GB and 1TB capacities. With prices ranging from $229 for 250GB and a whopping $800 for the 2TB, this portable SSD has a hefty price tag. To give some context, the 2TB SanDisk Extreme Portable SSD costs $500. That’s a lot of added cost for an all-in-one battery, computerless media offload and wireless access to the drive.

The drive has one USB 2.0 type-A port for plugging in external media. It doesn’t discriminate, connect your HDD or SSD or even a card reader. An SD card reader is also built into the device. For charging and connecting to a computer, it has a USB 3.1 Micro-B port. We wish it was a USB type-C connector for the potential for faster charging and increased media throughput. The drive can be set up to automatically copy the media. It can even be set to only copy the files it doesn’t already have.

WD states that the drive has up to 10-hour battery life and we believe it — if you don’t use it as an emergency battery pack for another device. The drive will go into a power save mode when not in use, but we would just turn it off. Though you can use the drive to charge other devices, this use case presents an unwelcome tradeoff. If you drain the drive of its power, it won’t have the power to function. The power you get from it has to be more important than the ability to offload your media for this setup to work. Additionally, beware that it doesn’t charge things very fast. Over 45 minutes, we saw a 10 percent increase in power when charging an iPhone 8 Plus. Other external batteries could give the iPhone than five times the charge in the same time period.

Its wireless function is the My Passport Wireless SSD’s main competitive difference, but transferring data via Wi-Fi to or from the drive is painfully slow. With read and write speeds of 160 megabits per second, we would only expect to be able to smoothly playback video with a bitrate or 160mbps or lower.

The Wi-Fi can also be used for previewing files and verifying that they transferred to the drive. We tested with 10-bit video from the Panasonic GH5 and GH5s along with 10-bit ProRes 422 files captured on an Atomos Shogun paired with the Nikon Z7 and Z6 and the Canon EOS R. We were impressed that it could play back 10-bit video, though not smoothly.

Data transfer to a computer can be fast, but…

With the Wi-Fi data rates so low, it’s better to connect the My Passport Wireless SSD directly to a computer to pull off the data. Our first hurdle with media offload was that the drive needed to be turned off before connecting the USB cable. Once connected and powered on again, it will show up as an external drive on our system. If you don’t do this cycle, the drive will start to charge rather than function as connected media.

Because the drive comes formatted as NTFS, Mac systems will only be able to read the drive out of the box. To fix this, you’ll need to install the Paragon NTFS for Mac driver that WD offers with this product. If you are on a PC, you shouldn’t have this issue.

Once connected to the computer, we used both AJA System Test and Blackmagic Design Disk Speed Test to verify read and write speeds. The AJA test showed 473 megabytes per second write speed and 415 MB/s read speed. The Blackmagic test reported a lower 413 MB/s write speed, but read speed was the same at 415 MB/s. This is fast enough to use to edit video with a lower bit-rate.

Both tests showed speeds higher than what WD specifies. It’s a nice surprise to get another 20-30 MB/s in read and write speeds compared to what was expected.

What do other users say?

During the review process, we like to go and read user reviews to make sure we don’t miss anything. One user complained that the drive lost charge overnight. The drive still uses some power when not active, so we recommend turning it off when not in use, and charging it up when possible.

Another user was upset because the drive was larger than they expected. The drive is the same size as the previous version, if not bigger because of the rubber bumper on the outside. This reviewer must have thought that, because it was an SSD, it would be smaller. Don’t fall into the same trap.

The last issue was that transferring media from the drive over Wi-Fi was cumbersome, and if there is a lot of data, then they were unable to move all of the data at once. If you have lots of data to transfer, we recommend USB transfer — it’s much faster. When large files do need to be moved via Wi-Fi, the cache size will need to be adjusted. It goes up to 20GB, so moving files larger than that isn’t possible.

How does this drive compare to similar products?

We’re going to look at one other portable SSD and two HDDs, all with computerless media offload. The first is the Gnarbox 2.0. It has a bigger price tag of $899 for just 1TB. However, it does have some features that the WD does not, like USB type-C, an IP67 waterproof rating and the ability to see when your media is completely offloaded without another device. It also has a removable battery.

Next up is the LaCie DJI CoPilot. It’s an HDD, so the price per gigabyte is much lower. The 2TB version goes for $350. It has USB type-C interface and a built-in display that will indicate when media offload is complete.

Last up is the My Passport Wireless Pro USB 3.0, a HDD version of the product in this review. For 2TB, the cost is only $140. That’s crazy when compared to the price of the SSD version. The USB read and write speeds are not as fast as the SSD, as expected, but with a price like that, it’s hard to justify splurging on the SSD. The SSD is far more durable than a spinning disk drive, however. That can also help justify some of the cost.

The WD My Passport Wireless SSD offers performance improvements over the HDD version, though it comes with a huge price tag. The drive works well but has some quirks that take some getting used to. It performed as expected, but it just isn’t fast enough for working with large amounts of data or higher bit-rates The price of the drive is hard to accept, so if it has the functions you need it to have, you will also have to justify the price — oof. 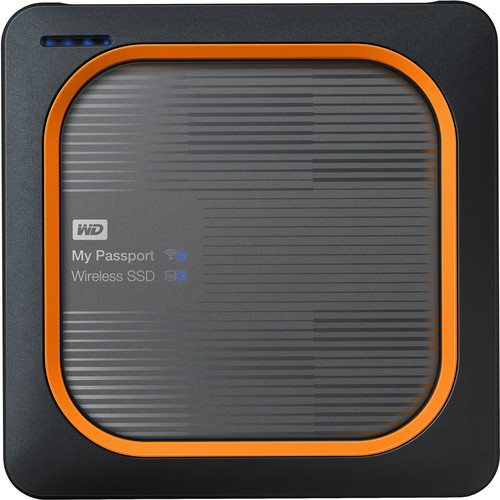