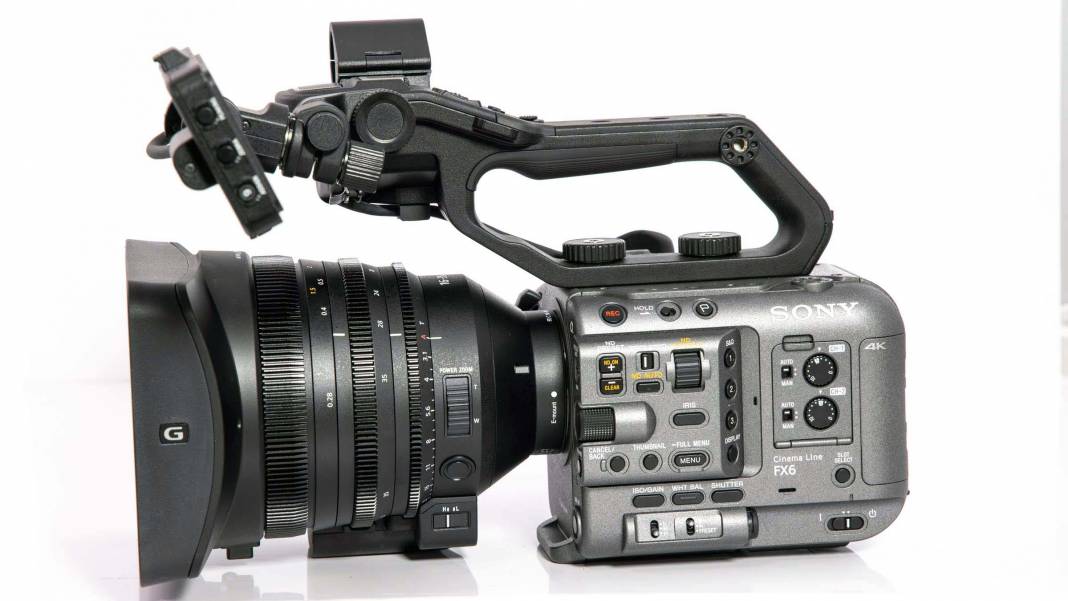 The third camera in Sony’s Cinema Line, the Sony FX6 is a full-frame cinema camera that’s lightweight and fully featured. Sony’s predecessor, the FS5 II, is a small body super 35 cinema camera. The FX6 comes with all of the bells and whistles of the FS5 II, but has a larger sensor, new media options, higher frame rates, XAVC-I 10bit 422 internal capture and new mounting options. It can shoot up to 240 frames per second (fps) in HD, 120fps in UHD 4K and up to 60fps in DCI 4K.

Our first reaction when pulling the camera out of its box is that it’s surprisingly small and light. Made from magnesium alloy, the camera is just slightly heavier than the FS5 II at 1.96lbs compared to 1.83lbs. Even though it has a larger sensor, the body is slightly shorter and deeper, with only the width being larger by .1 inch.

The adjustable smart grip is fantastic. It’s easy to adjust and comfortable to use. It brings all the functions to the fingertips. New to the FX6 are multiple mounting points for the monitor. It secures to the front left, rear left and the rear right. The monitor has a touch function but has to be activated using an assignable button before it works.

Sony says the reason for this is to keep from wrongly touching it and changing a setting. We’ve reviewed many touch screens and this rarely happens. Button activated touch function is not that big of a negative, but we feel it’s unnecessary.

With the CBM app, the focus, iris and zoom can be controlled. Plus, it can be used to preview the shot. When using Catalyst, the camera captures metadata that indicates camera rotation information, clip flags and image stabilization data.

The camera has two card slots with the ability to accept two different types of media. It can take either UHS-II or UHS-I SDXC cards. Both media types have been around a while and are relatively inexpensive. It also works with the new, much faster CFexpress Type A cards. The camera only needs the CFexpress Type A for shooting at its highest frame rates and at the highest data rates.

We don’t see a big need to buy the CFexpress Type A cards unless 120fps in UHD4k in 10bit 422 is what you need to do. However, these new cards will offload much faster. Like past cameras in Sony’s cinema line, the FX6 can create proxies on the second card while recording your native footage.

The camera has a flexible audio workflow. It has two XLR inputs with exterior controls to adjust the gain. The camera can capture up to 4 channels at once. That means it can capture the stereo mic built into the handle—along with those two XLR inputs—or using the multi-interface shoe on the camera it can use one of two accessories. The XLR-K3M gives two more XLR inputs and the URX-P03D w/ SMAD-P5 allows for wireless digital audio.

As expected, the image quality of the FX6 is quite nice. It has a full-frame 10.2 megapixel (MP), back-illuminated CMOS Exmor R sensor. The low megapixel count allows for larger pixels, which allow for extra sensitivity. We will elaborate more on that in the low light performance section. Using its Bionz XR processing engine, the camera has S-Log3, S-Gamut3, S-Gamut3.Cine along with S-Cinetone, so it can be a good match to the FX9 and the Venice.

One of the best features of the FX6 is its variable ND filter, which was first introduced in the FS5 and later included in the FS7 II and FS5 II. This ND also allows for a perfect setting because it can go between its steps ¼ and 1/128. This opens up the ability to have the ND counter any adjustment in aperture. This allows for a rack focus of sorts with the depth of field.

Say the exposure is set at f2.8, by using the auto ND to darken the scene so that perfect exposure is possible. Then through automatic adjustment, the ND and increasing the aperture counter each other. The scene can then go from a shallow depth of field to a deep one in the same shot, without composite. Outside of that party trick, it’s more useful when transitioning from indoors to outdoors. It offers no ND filter bloom for a smooth transition through different lighting situations, even when dynamic.

The FX6 has what Sony calls fast hybrid autofocus (AF). It is a combination of phase and contrast detect autofocus. It offers 627 focal plane phase-detection points with face-detect AF and real-time eye AF.

To test the AF system, I walked from 20 feet away, straight at the camera at a normal walking pace. In our first test, I was wearing a mask and it seemed that the camera had a hard time finding my eyes with the mask on. We then duplicated the test—with the mask off—the performance didn’t improve.

We did see good performance when close to the camera. Standing about 4 feet away, I came in and out of the frame. Once the camera had found and focused on my face, I moved in and out of frame. The camera snapped quickly back in to focus on my face when I returned.

We doubled the ISO and countered that with aperture and shutter speed, to keep the same exposure. The image looked good to use up to ISO 102,400. That’s an incredible low light performance. This puts the FX6 as the go-to cinema camera for run and gun shooting.

Documentarians and other shooters that are unable to control the shooting situation will benefit from its low light performance.

Because it’s a cinema camera, the FX6 has multiple battery options, depending on what the user might need. We tested the camera with the BP-U35, which costs $160 when bought by itself. This is the smallest battery offered for the FX6, but offers an impressive 155 minutes of battery life. Larger and more expensive are the BP-U70 and BP-U100 batteries at $320 and $450 respectively.

We tested the dynamic range of the FX6 with our DSC labs Xyla 21 chart.

This camera has a rolling shutter. However it does not have a rolling shutter problem. The amount of bend to vertical lines when doing a quick pan is minimal. We would not be worried about shooting this camera in situations, when quickly panning or shooting fast objects.

The FX6 has the Sony E Mount that Sony now offers 58 different lenses for. There is also a large amount of E mount lenses offered by third parties.

We shot two lenses during the duration of this review. The first is the brand new FE C 16-35mm T3.1 G servo-controlled cine-zoom. With a price tag of $5,500, it’s not a cheap or affordable lens. However, it has a fantastic optical quality.

The servo zoom can be detached to make the lens lighter for those that don’t need it. It can have either smooth transitions or click aperture ring control. For those that are used to f numbers, T3.1 is around an f2.8. This is a great lens, but because of its price, it’s not likely to be for everyone.

The other lens we tested is the Sony FE 24-105mm f/4 G OSS. This lens can be bought as the kit lens for a discount when coupled with the camera upon purchase. It’s a fine lens for the camera and gives a great focal range with an aperture that is easy to deal with because of the low light sensitivity of the camera. When bought by itself, the lens costs $1,400.

Sony is the first to offer a full-frame cinema camera in this price range. Canon has the C500 MK II, but it costs $16k, so it’s likely not in the same consideration as the FX6. Sony offers the FX9, just above the FX6, and as expected it’s more money at $11k. So, that leaves us with cinema cameras with a smaller super 35 sensor size.

The EVA1 shoots up to 5.7K on its super35 image sensor for $6,500. The camera has the Canon EF lens mount and offers dual native ISO. The EVA1’s top frame rate is 60fps in DCI 4k. It captures 422 10-bit video to two SDXC V60 card slots. The camera has a built in mechanical ND filter with a range of ¼ to 1/64. The camera has two full sized XLR inputs and a similar grip to the FX6.

Sony has made a solid, feature-rich cinema camera in the FX6. The variable ND is a great feature and it can practically see in the dark. We hope that the move to a full-frame cinema camera spreads to other brands and Sony has given them a high bar to reach for. We would have liked the autofocus to work better, but the ergonomics it has are great. If you like the Sony look, require a high-quality high frame rate capture and need great low light performance, the Sony FX6 is a great choice. 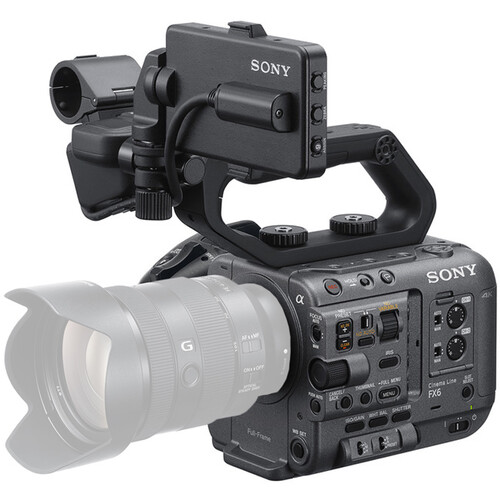