Lens manufacturer Tokina has announced a new lens in its Vista Prime cinema range. The Tokina 180mm T1.9 Vista Prime Lens has the longest focal length of the Vista Prime lenses. The company says that the new lens was specially developed at the request of cinematographers and rental houses.

The other lenses in the Tokina Vista Prime cinema lens family all have a maximum aperture of T1.5. Although the 180mm T1.9 is around 2/3rd of a stop slower, it is still very fast for a 180 mm lens. Tokina states that the new lens “maintains the performance of the other Vista Prime lenses, with the ability to isolate subjects at a distance, presenting them with an almost three-dimensional appearance.”

The Tokina 180mm T1.9 Vista Prime Lens will resolve images at greater than 8K+ resolution. The image circle of the lens covers both Vistavision and Super 35 formats. This means that the lens will work well with modern large sensor cameras like the RED V-Raptor, ARRI Alexa Mini LF, Canon C500 MKII, Sony Venice 2 and Sony FX9.

Tokina claims that the 180mm T1.9 Vista Prime Lens shares the family characteristics of the other Vista primes and that it creates organic yet highly detailed images. The company also says that lens distortion and chromatic aberration are virtually undetectable.

The lens has a minimum focus of 4 ft and 11-inches. At this distance, you will get a maximum magnification ratio of 1:7.91, which means you can capture beautiful close-up shots of your talent. The Tokina 180mm T1.9 Vista Prime Lens also focuses internally, which means it does not change in length when you change focus. In addition, there is practically no focus breathing. Focus breathing means that the image size slightly changes as you pull focus.

The Tokina 180mm T1.9 Vista Prime Lens is composed of 17 elements in 14 groups. It also has a 9-bladed iris, which will give you a rounded bokeh. The lens is 7.7 inches long and weighs 7.19 pounds for the PL mount version. All Tokina Vista Prime lenses have mounts that are interchangeable by a service facility. The alternative mount options cover PL, LPL, Sony E, EF and MFT cameras.

The front of the Tokina 180mm T1.9 Vista Prime Lens has the same 114mm outside diameter as the other Vista Primes. This means you can quickly and easily swap between lenses without reconfiguring your rig. The lens also has a 112 mm filter thread. 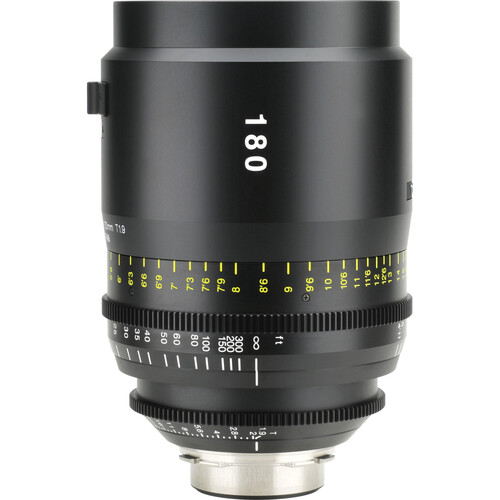