Tamron, a prominent Japan-based camera lens manufacturer, is about to release its first Fujifilm X-mount lens for Sony E-mount: the 18-300mm f/3.5-6.3. Though the details are slim, Tamron revealed some key bits on information about the lens.

Let’s get into what we know about the lens so far:

In total, the 18-300mm f/3.5-6.3 Di III-A VC VXD covers approximately 27mm to 450mm in a 35mm full-frame equivalent, making it useful in a variety of environments. Additionally, Tamron claims the lens is the first APS-C mirrorless zoom lens capable of a 16.6x zoom ratio. The lens does feature a minimum focus distance of 5.9 inches at the wide end and a maximum magnification ratio of 1:2. This means the lens should lend itself well to close-up shooting.

Also, Tamron revealed the 18-300mm houses special lens elements. However, the company hasn’t elaborated further on what that means specifically. We currently don’t know what special elements the company is referring to and how many elements there are. Although, Tamron claims the elements help the lens maintain high resolution from edge to edge, outclassing many competing all-in-one zoom lenses.

Tamron revealed the lens will feature its Vibration Compensation (VC) mechanism. The mechanism helps stabilize shots — even if it’s at its most extended end. It’s good to see the lens features some kind of stabilization, though Tamron interestingly hasn’t said if the lens will work with Fujifilm cameras’ in-body image stabilization.

While there aren’t many specifics about the design or its resistance, Tamron did offer a few bread crumbs to speculate about. It said the lens will have a “comfortably compact” design and be moisture-resistant. It will also include a zoom lock switch (preventing any accidental changes to the zoom setting) and a fluorine coating on the lens’s front element.

Tamron claims the 18-300mm f/3.5-6.3 Di III-A VC VXD’s autofocus system operates at the “highest level in its class.” The lens features the company’s linear focus mechanism, the VXD (Voice-coil eXtreme-torque Drive). This drive should deliver quick and quiet autofocusing, according to the press release.

Tamron didn’t specify how much the lens will cost. However, we can expect the lens to release sometime this fall. 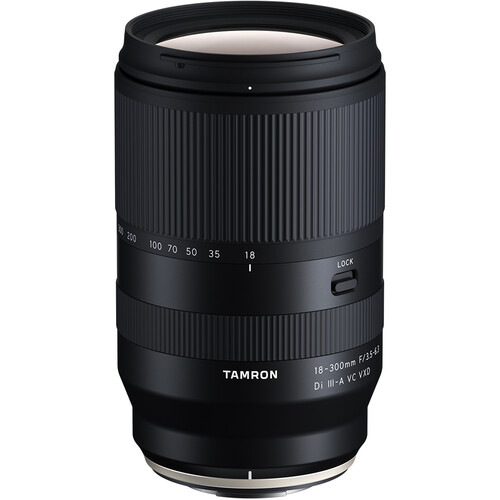