Sony has announced a new compact shotgun microphone. The ECM-G1 is designed to be mounted on top of a camera and is aimed at vloggers and content creators.

The Sony ECM-G1 is a really lightweight microphone, weighing only 1.2 ounces. It’s also small, measuring only 1 inch by 2 inches by 1.9 inches. If you shoot your vlogs handheld, you won’t have to worry about this mic affecting the balance of your camera. The mic body won’t come into shot either, no matter how wide a lens you choose. Sony has also designed the ECM-G1 in a way that allows you to use your camera’s viewfinder without having your head touch the mic.

Sony’s ECM-G1 shotgun microphone attaches to compatible Sony cameras via the Multi Interface (MI) shoe. This setup means you can work battery and cable-free, as power and audio are supplied through the shoe. In addition, the audio signal is recorded digitally straight away rather than being recorded as an analog signal and then converted to digital. The ECM-G1 also has a microphone out jack on the side. This means you can use the mic with any camera, computer, or recorder that has plug-in power but doesn’t have an MI Shoe. Sony even supplies a 3.5 mm TRS to TRS cable for you to use.

This shotgun microphone has a large diameter 14.6 mm microphone capsule. The microphone also has a super-cardioid pickup pattern. This means it captures sound from in front of the camera while suppressing ambient sounds from the sides and behind. Sony’s launch video features a vlogger recording in a noisy airport, and the ECM-G1 provides a huge improvement over the built-in camera mic. The body of the ECM-G1 also incorporates a vibration-suppressing design. This reduces minor bumps and mechanical noise that can occur when you handle your camera for focusing or zooming. In addition, Sony includes a detachable windscreen that can reduce wind noise when shooting outdoors.

The Sony ECM-G1 shotgun microphone seems like a great little microphone and should offer a big improvement over using your camera’s built-in mic. In general, short shotgun mics don’t reject ambient sound and longer-bodied models. However, most vloggers will be holding their camera no further than arm’s length away, so the ECM-G1 will be close to their mouth when speaking. The ECM-G1 is so small that you can always leave it attached to your camera, even when putting it away in a case or bag. If you are a vlogger looking for better audio, especially if you use a Sony camera, then the ECM-G1 is worth a look. 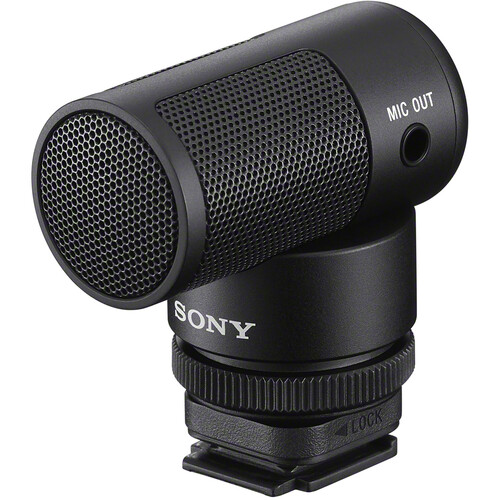