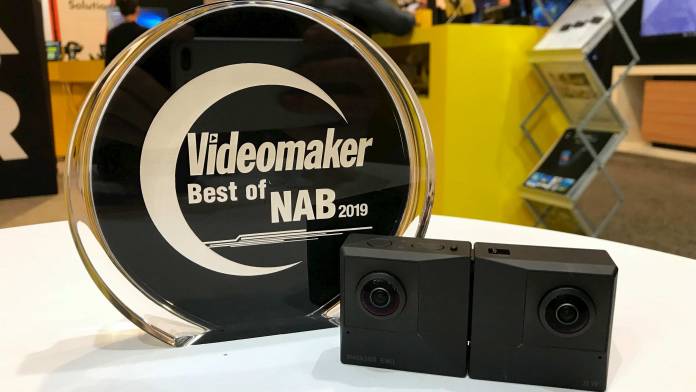 Congratulations to Insta360 for taking home Videomaker’s Best 360 Camera Award at NAB 2019 for the unique EVO, which shoots both 180- and 360-degree video.

Coming after the One X 360, Insta360 brought us the $419 EVO. Right out of the gate, you can see that the EVO has a very interesting design. To switch between its 180-degree and 360-degree modes, you actually have to physically fold the camera. Folding the camera will enable 360-degree capture mode. When you unfold the camera and both cameras are side-by-side, you enable its 180-degree mode. You don’t have to worry about the camera swinging in and out of its modes either because it clamps in place when folded.

The video on this camera is promising, too. You get to enjoy shooting 5.7K video at 30 frames per second with its two f/2.2 cameras. Other shooting modes offered include 4K at 30 or 50 fps, or 3,008×1,504 pixels at 100fps. Plus, the video stays steady thanks to its built-in six-axis gyroscopic stabilization and FlowState stabilization.

Here is a sample video from Insta360 demonstrating what the EVO’s 180-degree mode is capable of:

While you can take 18-megapixel images, you can also take 3D photos with the EVO. All you have to do is fold the camera into its 180-degree mode.

Steam directly to a VR headset

Another cool feature we like about the EVO is that you can stream videos to a VR headset. It’s compatible with headsets like HTC Vive Focus, Oculus Go and Samsung Gear VR. However, if you don’t have a headset, you can still view EVO’s 3D images on an iPhone paired with a $30 case from a South Korean brand Holoframe.

Congratulations again to Insta360 for winning Videomaker’s Best 360 Camera Award at NAB with the EVO.