Since its launch, filmmakers have used Laowa’s original probe lens to create some truly unique content. The company has now launched a new probe lens which takes the concept even further. The Laowa 24mm T14 2x Periprobe has all the features of the original probe lens and adds a periscope option.

The Laowa 24mm T14 2x Periprobe is for use with full-frame sensors. At 16.6 inches, it is the same length as the original probe lens. However, it consists of a main unit and two interchangeable lens tubes. The 0-degree tube gives the same straight-through perspective as the regular probe lens, but the 90-degree lens tube has the lens opening on the side. This design enables it to work like the periscope on a submarine, meaning you can shoot in tight spaces that would otherwise be impossible.

The front barrel of the Periprobe is waterproof, so you can shoot underwater without the need for additional housing. You can rotate the lens tube 360 degrees while filming or lock it off with a simple clutch ring. There is an LED light ring around the lens opening to provide an additional light source for your subject.

The 24mm T14 2x Periprobe is constructed from 28 elements in 19 groups and has a wide 85-degrees field of view. It also has a minimum focus distance of only 0.8 inches at 2x magnification. The aperture range is from T14 to T40, which gives a large depth of field at close distances. The focus ring of the lens has a standard 0.8 pitch gear, so you can use it with a follow focus for precise control.

The 24mm T14 2x Periprobe is available in Arri PL, Canon EF, Canon R, Nikon F, Nikon Z, Sony E and Leica L-mount options. It comes with two USB power cables ⁠— one with a dimming option and one without ⁠— a protective case and front and rear caps for all modules and the main unit. As the lens is designed for full-frame cameras, Laowa makes an optional 0.7x Focal Reducer for use with APS-C and Micro Four Thirds cameras. 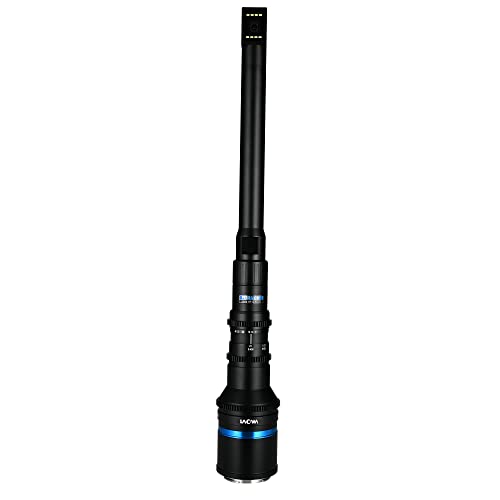