A wireless microphone system for iOS and Android

The Godox Movelink wireless microphone system is available in two versions: the Godox LT1 and Godox UC1. Godox designed the LT1 model for iOS devices, while it designed the UC1 model for Android devices. The system consists of a small transmitter and a separate receiver unit. The LT1 receiver has a Lightning connector, and the UC1 receiver has a USB-C connector. However, the transmitter unit is the same in both versions. The Movelink system uses a digital, frequency-hopping and 2.4=GHz bandwidth wireless system. The maximum range is up to 164 feet with line of sight.

The Movelink receiver plugs directly into the USB-C or Lightning port on your mobile device and is powered by the host device. It weighs half an ounce and measures 2.8 by 0.7 by 0.4 inches. As it is a two-channel receiver, you can record from two transmitters at once. You can buy additional transmitters separately. However, Godox has launched LT2 and UC2 versions of the Movelink wireless microphone models, which come with two transmitters and a single Lightning or USB-C receiver unit.

The Movelink transmitter unit weighs less than 1 oz and measures 1.6 by 2 by 0.6 inches. It has a built-in omnidirectional microphone and a 3.5 mm TRS socket. There is also a wired lavalier microphone with a 3.9-foot cable and 3.5 mm TRS plug. The transmitter has a mute button. Additionally, its TFT display shows battery life, levels, mute status and more.

The transmitter has a built-in clip for you to attach it to your subject’s clothing. In addition, the back of the clip is magnetic, so you can connect the transmitter with the included iron pad. You can run the transmitter for up to six hours on the internal, rechargeable lithium-ion battery. It charges via a USB-C port, and you can also power the unit on AC via this port.

The iOS-compatible Godox Movelink LT1 cost $169. The Android UC1 version is slightly cheaper at $149. However, the dual transmitter LT2 and UC2 systems cost $218. 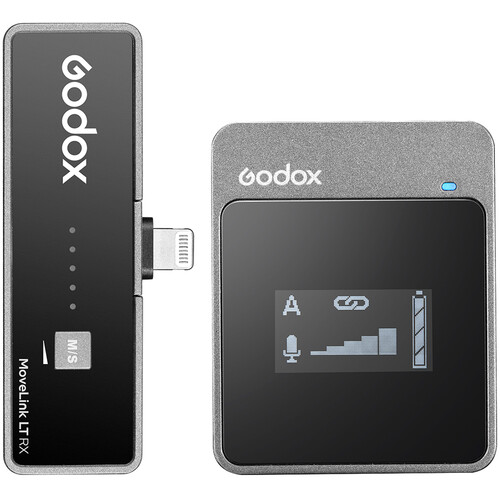 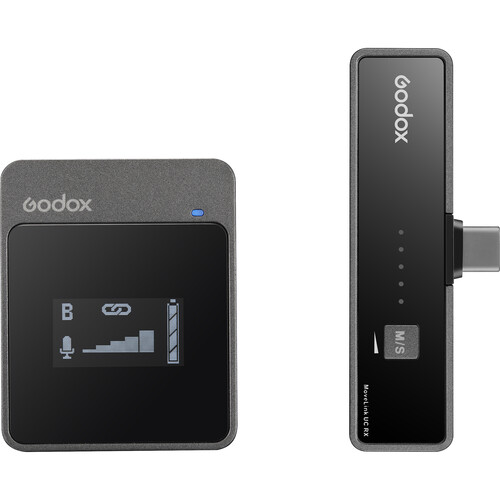