Fujifilm has introduced the Fujifilm X-T5 APS-C mirrorless camera. Though this camera is being marketed as a photography camera, it still has some interesting features for video shooters.

In addition to F-Log, the X-T5 also supports recording your video in F-Log2. Fuji claims that this records images with an expanded dynamic range of more than 13 stops. This range is wider than with F-Log, so you will have more scope to color grade your images in post-production.

If you use an ATOMOS HDMI device with the X-T5, you can record RAW video output from the X-T5. This setup supports 12-bit Apple ProRes RAW at resolutions up to 6.2K and frame rates up to 29.97 fps. You can also combine the X-T5 with the Blackmagic Design Video Assist 12G. This means you can record the camera’s RAW video output as Blackmagic RAW (BRAW) at up to 6.2K / 29.97 fps.

The Fujifilm X-T5 has in-body image stabilization (IBIS) system which works in five axes. The company says that this combats all types of camera movement and provides up to seven stops of compensation.

This camera has a 3.5 mm stereo jack for connecting an external microphone. It also comes with an adapter so that you can use headphones.  The camera records to dual SD card slots, both with UHS-II compatibility. The X-T5 has 56 weather-sealed points for high levels of dust and moisture resistance. It can also operate in temperatures as low as -10°C (14°F).

The Fujifilm X-T5 is a camera primarily aimed at photographers, but it still has the ability to shoot high-quality video. When combined with an external recorder from ATOMOS or Blackmagic Design, you can also record RAW video, which is a great bonus. If you are looking for a still photography camera that also allows you to record video from time to time, then the X-T5 might meet your needs.

The Fujifilm X-T5 mirrorless digital camera will be available in black and silver colors. It is scheduled to be available from late November and will retail price at $1699 for the body only. 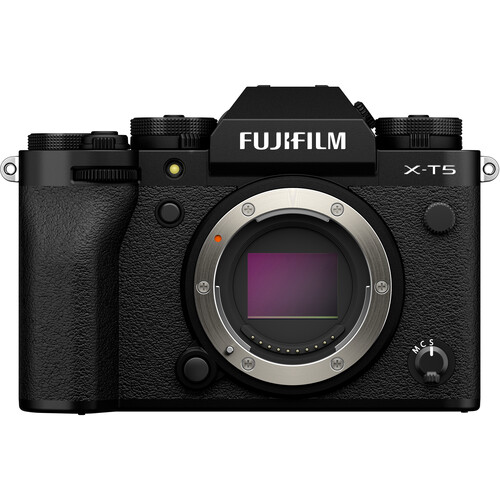