The Deity Pocket Wireless is a new, lightweight and compact wireless microphone system. It’s simple to use and aimed at content creators. However, it can also integrate with all of the more advanced Deity Connect wireless systems as users grow their kit.

Deity’s new Pocket Wireless system consists of a small transmitter and receiver unit. These both measure around 1.3 by 2.2 inches and are 0.8 inches deep. The receiver weighs around 1.2 ounces, and the transmitter is even lighter at just over an ounce.

The transmitter has a built-in microphone and can clip directly to the subject’s clothing. For more discrete microphone placement, Deity includes a wired Deity lavalier microphone. This attaches to the transmitter via a locking 3.5 mm input so it won’t become unplugged accidentally. The Pocket Wireless system also features Deity’s Guard Rail Analog Limiter to help prevent clipping and distortion.

The receiver unit has a clip that doubles as a universal cold shoe mount so it can attach wherever you need it. There is a large 1-inch OLED display on the side of the receiver. This screen shows you both units’ audio levels, microphone gain, signal strength, and battery status. Deity also designed its display to be bright so it’s visible in daylight. There’s also an option to flip the display orientation to make it easier to read if the receiver unit is inverted.

Pairing the transmitter and receiver is quick and simple, needing only a single button press. Deity quote an operating range of up to 175 feet for the system. The transmitter and receiver both charge via a USB-C cable. Charge time comes out to be at 75 minutes per unit. The battery life lasts over 5 hours. The USB-C connection also enables the receiver to plug into a computer or compatible phone. This allows it to work as a USB microphone.

Beyond the basic kit, Deity also offers the Pocket Wireless Mobile Kit. This adds a tabletop tripod that doubles as a handle for vlogging. It also includes a custom phone clamp so you can mount the receiver unit on the side of your phone. In addition, the clamp has a cold shoe on top for mounting an LED light. 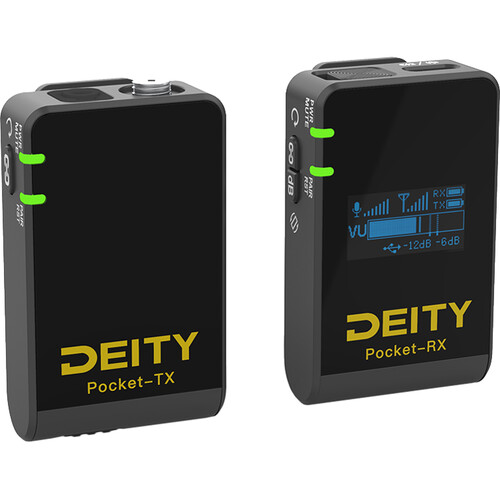 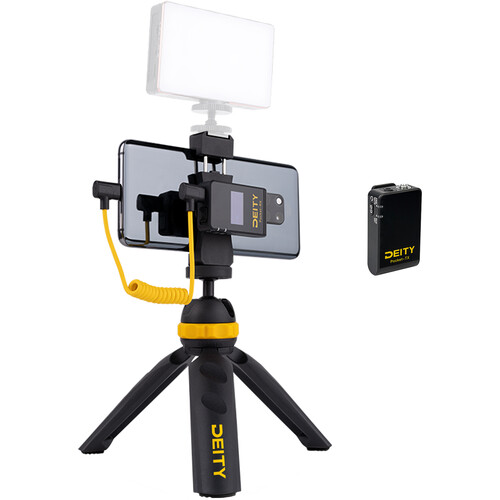