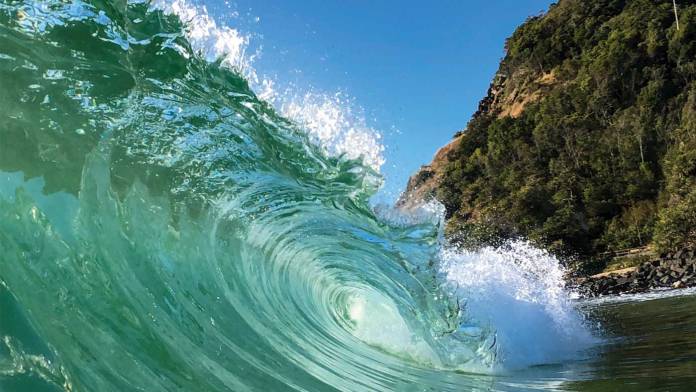 Rob Layton is a mobile man on several levels. On any given day, you might catch him teaching a Mobile Journalism class at Australia’s Bond University. Or, you’ll find him leading a seminar on iPhone photography at a conference in Europe or Asia. You might also find him under the water with his iPhone, working on another award-winning documentary.

You read that correctly, Layton primarily shoots on a phone and his specialty has become mobile video and underwater capture. His work has been featured in a number of film festivals. He’s won awards at the Independent Shorts Awards in Los Angeles and London’s Short Film Show.

We caught up with the fifth generation journalist as he was on his way to the SmartFotoFest in Nui Galway, Ireland.

Layton tells us that it all began when he was 16 years old and starting a career in journalism. He was quickly attracted to photography by friends he was working with. “I thought what they were doing was so much cooler than what I was doing. Although news photographers, they were really arty and doing these incredible black and whites,” Rob says. So he bought a Nikon and started shooting on film.

Later, Layton was drawn to video and cinema. However he quickly learned that was going to be an expensive step to take. “One of my best friends back when I started was a cameraman and producer, and he would think nothing of spending $30,000 on a new camera.” He says, “That was my entire year’s salary, so it seemed permanently out of my reach.” That was, until the introduction of the iPhone.

What really convinced the Australia native to take the iPhone seriously happened on a trip with his family. “A few years ago while on holiday in Scotland, my wife was getting better shots with her phone than I was with a DSLR!”

Like a good newsman, Layton began to research what others were doing with their cameras. He came across a Facebook community called MojoFest (Mobile Journalism Festival). “It’s a community of journalists who use smartphones professionally. It started as a conference for RTE, the Irish national broadcaster, organized by then-RTE journalist Glen Mulcahy.”

He credits this group with the bulk of his learning. “Its members are so passionate about what they do and sharing their knowledge, so I’m really happy to be able to give something back.” He is now a regular speaker at the gatherings in Europe and Asia. He learned about the apps and techniques that would help him make still images and videos. It became his new passion.

“I wrote mobile journalism into the journalism curriculum at Bond University, where I teach, almost three years ago,” Layton says. He is convinced that mobile cameras are the future of newsgathering. “Video is everywhere, and now anyone can make professional-standard content with their phones. Europe is by far ahead of the rest of the world in terms of mobile journalism, and Ireland stands out. The team at RTE, headed by Philip Bromwell, do amazing work.”

The state of mobile video

Layton likens the current mobile phone industry to the Space Race of the 1960s. Each new generation of phones comes with a better camera than the competition. This is great news for consumers, as he points out, “The advances in computational photography in which much of the heavy lifting — image stacking, embedded S-curves in algorithms, motion metering, time-of-flight depth mapping — is done as or before the image is taken. [It’s] redefining photography. I have been asking myself: Do I need to teach fundamentals of photography to students? Will things such as F-stops and exposure values still be relevant in 10 years?”

Cameras are better than ever, but so are the tools for post-production.

Cameras are better than ever, but so are the tools for post-production. “All my videos are edited on LumaFusion,” Layton points out, referring to the mobile video editing app that some say is as good as any desktop editor. “It’s very intuitive and I taught myself how to use it during a stop-over at an airport. It was an 11-hour delay, so I had plenty of time.”

That means he does every aspect of the process with a mobile phone or a tablet. Sometimes he even posts to social media or shares his clips with others while still on location. Layton believes that we’ve entered a new era of visual storytelling powered by smartphones. “I read a column recently that claimed in 10 years, dedicated cameras will be as quaint as putting a needle on a record. I believe that to be true.”

“The beauty of smartphone filmmaking,” Layton continues, “is that it puts a once-exclusive industry within reach of everyday users.” According to Layton, even Hollywood insiders are using the tools. “Director, Steven Soderbergh, for his past two feature films, has used the same camera that I use. I find that very empowering.”

Taking it below sea level

So, when did this journalist start shooting underwater? That actually came from doctors orders. “I suffered a shoulder injury that required extensive surgery, and the surgeon told me I could not surf for eight months. For someone who has grown up surfing and is in the ocean almost every day, that’s a lifetime.” He was advised that, although he may not be able to paddle, he could still go in the water. His natural thought was to capture the beauty he finds underwater off his Gold Coast Australia home.

Finding the right housing for the iPhone was the critical next step. “Aquatech had released the AxisGo for iPhone the year before and it ticked all the boxes. This company makes high-end professional housings for DSLRs, so they know what they are doing. Lightweight, simple to use, extremely robust, and the touch-sensitive polycarbonate membrane allows me to use all my regular apps just as if I were on land.”

Of course, there’s more to shooting underwater than just turning the camera on and keeping it dry. “The biggest challenge I find in underwater shooting is getting the white balance right. Although I only dive as deep as I can hold my breath, up to 70% of red light can disappear in just five feet of water. But these types of challenges will be overcome as technologies improve.”

Layton looks specifically to the features in the Filmic Pro App and LumaFusion’s color tools to get the color balance he wants. The results come together in his award-winning short “Falling, Not Waving” and in scenes from an upcoming surfing documentary that he uploads to his social media sites.

Advice for other mobile video producers

Although underwater mobile video may not be for everyone, Layton says your phone is all you really need to start producing. His advice: “Know your phone. Understand how to use the native apps, what they can do, and then start exploring more professional apps, such as FilMiC, Halide, Spectre, NightCap. Start with some simple editors, like Splice and VideoLeap, and then move on to multi-track editing, such as Luma Fusion and Adobe Rush.” He adds, “The most important thing to remember is this old saying: it is the photographer who takes the picture, not the camera.”

Watch Rob Layton’s work on his Vimeo Page or catch up with what he’s working on at his web site: www.roblayton.com.au. You can also follow him on Instagram for some stunning images from his travels: @roblayton_iphoneography