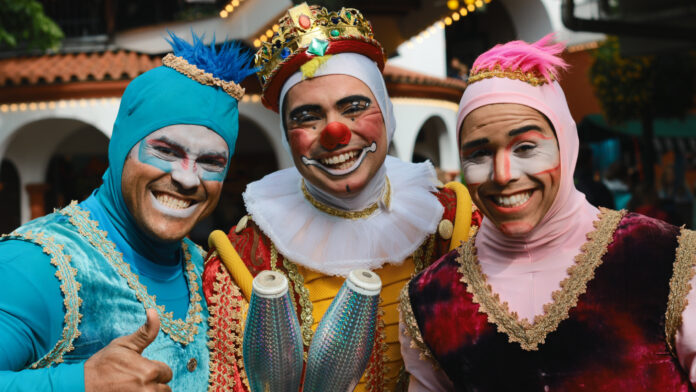 When viewers watch dramatic, tear-jerker films, they sometimes need some comedic elements to diffuse the constant tension. Comic relief has been an age-old plot device used by filmmakers to lighten heavy scenes, giving audience members a break and increasing their overall enjoyment. Comic relief is a powerful tool that filmmakers need to handle with care. So, let’s define what comic relief is, discuss its definition and look at why it’s usually good for filmmakers to use in their projects.

What is comic relief in cinema?

The definition of comic relief is it’s a storytelling plot device that’s meant to lighten the project’s mood and keep the viewer entertained. It’s common practice for films and TV shows to use comedic elements in dramatic, upsetting or plot-heavy scenes.

Comic relief can be a humorous joke or an action done by a character to make light of the situation. Some works have characters that are dedicated comic reliefs throughout the entire project. Comic relief characters are typically sidekicks to the protagonists and embrace a light-hearted, fun-loving personalities — think Timon and Pumbaa from “The Lion King” (1994) or Donkey from “Shrek” (2001). However, comic relief characters don’t always have to be on the side of the protagonist. They can also be hapless villains, such as White Goodman from “Dodgeball: A True Underdog Story” (2004).

Where does comic relief come from?

The origin of comic relief comes from the Greek tragedy. These types of tragedies rarely contained comedic elements, but they were a practice of ending tragic performances with a humorous satyr play. Later on, in the Renaissance, Christopher Marlowe introduced comic relief in “Doctor Faustus.” Scene IV of Act I, scene II of Act II and scene I of Act III are just some of the scenes where comic relief was used.

Why is comic relief so important?

Sometimes comic relief gets an unfair bad wrap. Sure, it can ruin a scene or tone of a film when improperly used. Look no further than comic relief characters like Fergie in “Judge Dredd” (1995), Bernie in “Godzilla vs. Kong” (2021) or Jar Jar Binks in “Star Wars: Episode I – The Phantom Menace (1999). It’s general consensus that while these characters were too comical and clashed with the plot and tone of their films. Remember: While comic relief is meant to make people laugh, too much comic relief will result in your audience not taking anything in the film seriously. If a character is too comical during a dramatic scene, it may even annoy your audience.

When used correctly, comic relief can help your viewers emotionally attach to your film’s characters. People love to laugh, so naturally, they will gravitate to those who can make them laugh.

Tragedy can also weigh heavily on your audience and may even turn some people off if there’s no hope. Comic relief can inject a little hope into your film. Even if the film ends tragically, comic relief can still make the ride more engaging and can even heighten the impact of the tragic end, such as a film’s comic relief character, the one seen as the symbol of hope the entire film, bing killed by the antagonist in the end.

Comic relief comes in many forms

As we explained in its definition, comic relief doesn’t come in one form. It could be pieces of dialogue, jokes or a character that diffuses the tension of a scene. Let’s take a look at a few examples of comic relief scenes and characters.

For instance, the argument scene among the newly-formed Avengers team in “The Avengers” (2012) movie. In this scene, Tony Stark and Captain America are at each other’s throats. Steve Rogers, in an attempt to attack Tony’s ego, questions what he is if he didn’t have his armor suit. However, in Tony Stark fashion, he quips back that he’s: “A genius-billionaire-playboy philanthropist.” This is such a brilliant use of comic relief because while it makes the audience laugh, it also establishes Tony Stark as a confident, somewhat arrogant character. It also ironically creates more friction between Tony and Steve Rogers, further progressing the intensity of the scene immediately after making viewers laugh.

And who could forget this funny scene in “Easy A” (2010). Protagonist Olive Penderghast is speaking with her mother and her adopted brother Chip. They are having a conversation about puberty and late bloomers running in the family. Chip then blurts out that the conversation doesn’t matter because he’s adopted. This could have led to an uncomfortable, touchy subject, but instead, Olive’s father interjects with the line: “What? Oh my God! Who told you? Guys, we were gonna do this at the right time.” His response is out of the blue and a bit ridiculous, as it is obvious to Chip that he is adopted.

They can also be characters

Characters who are comic reliefs are made oftentimes to make the audience entertained and laugh throughout the film. For instance, Tony Stark might make a few funny quips during intense moments, but he isn’t a comic relief character. His role in the story isn’t to make people laugh. The simplest definition of a comic relief character is a character that’s in a film to make people laugh. However, in truth, these characters can still have depth and importance in the story.

Let’s look at a few examples:

Early in the story, they serve as the story’s comic relief. However, they have respective character developments and lived up to the lesson of the film that small people with no great ability ultimately save the world. Their example shows that even comic relief characters aren’t just lazy ways for screenwriters to get laughs. They can be — or develop into — fully fleshed-out characters that play an important part in their films’ plots.

Ned Leeds’ character in recent “Spider-Man” movies makes a lot of scenes entertaining, especially when he’s with his best friend, Peter Parker. In the example below, with all the uncertainty Peter faces when deciding if he should tell his loved ones he’s Spider-Man, Ned is there to unintentionally make light of the situation with his various nonsensical questions. This offers an interesting contrast to the original Spider-Man film trilogy. In Sami Raimi’s “Spider-Man” trilogy (2002 – 2007), it was dramatic whenever people found out the identity of Tobey Maguire’s Spider-Man. Here, instead of rehashing what audiences have already seen, the film uses Ned’s well-meaning but cluelessness to make light of the fact that Peter’s secret identity is slipping.

Who doesn’t get a laugh when Olaf shows up on screen? This adorable snowman provides laughter just right on time when things get heavy. Probably Olaf’s best scene is his musical performance called “In Summer,” where he just innocently sings about getting a sunbath and being a cool snowman in summer.

Harley Quinn is Joker’s henchwoman and is also a comic relief in “Suicide Squad.” Although portrayed as an antiheroine, Harley Quinn never fails to make the audience laugh and giggle with her one-liners. She also shows that not every comic relief needs to be a “good” character. Harley Quinn can be quite villainous, yet she lightens the darkness of her actions with her witty insanity.

Comic relief strengthens the plot of the story. Scenes and characters that are considered comic relief are used to reveal important information to the audience and even foreshadow serious events that are coming. It is not just a plot device inserted mindlessly to make the audience laugh. A well-thought of comic relief is necessary for a plot to work out.