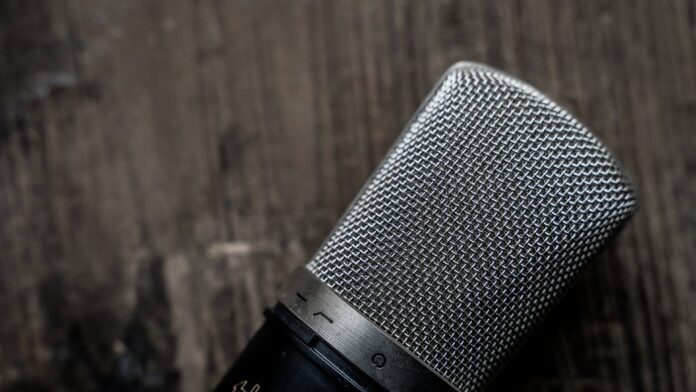 A simple way to remember a condenser microphone’s design lies in its name. The word condenser is a British English synonym for capacitor. The name has clearly stuck since around and is still in use it today.

In order to better understand the workings of a condenser microphone, it is important to look at what makes them different from dynamic microphones. A microphone’s ability to pickup sound, including the basis of microphone amplification, all hinges on electrical current.

First, let’s brush up on our dynamic microphone theory.

Dynamic microphones operate on the principle of electromagnetic induction. Picture a piece of conductive metal suspended in a magnetic field. Moving the metal within this field results in a current relative to the size and direction of the movement.

A typical dynamic microphone capsule package includes a thin diaphragm with an attached voice coil made of a conductive material surrounded by a permanently charged magnetic structure. Air pressure in the form of sound waves reaches the diaphragm that causes it to move. That movement translates into the attached voice coil, which generates a current as it moves up and down in the magnetic field.

To summarize, dynamic microphones use permanently charged magnets and require no additional power. The conductive voice coil’s movement inside the magnetic structure’s field generates a current.

The biggest difference between dynamic and condenser microphones is that the latter requires additional power in the form of 48V of DC current — also known as phantom power. In other words, where a dynamic microphone is passive, condensers are active electronics.

Condenser microphones use the electrostatic principle to create a charged structure that functions as a capacitor. The structure is the microphone capsule and is made up of two thin plates of equal size and surface area. The top plate, or diaphragm, is moveable; the backplate stays in a fixed position. Both plates are separated by a dielectric, in this case, air, and is also a fixed value. For now, all we need to know about dielectrics is that they are a type of electrical insulator. Combine these elements together, add phantom power, and you have a capacitor!

Now for the next step, sound pickup and amplification. More on this later, condensers also used to be known as tube microphones.

The capacitor first charges so that both plates are at equilibrium. Sound pressure waves reach the diaphragm and create movement, causing two events to occur. As the distance between the diaphragm and backplate decreases, capacitance increases. The same applies in the other direction. As the distance between the plates increases, capacitance decreases.

Everything we’ve described so far leads up to the final moment of producing an output signal. The last two components in the chain are a high impedance resistor to sample the changing output voltage — remember. the output voltage fluctuates because of the diaphragm’s movement — and a conversion amplifier that functions as a current to voltage converter. This is the signal that will be sent to the microphone pre-amp!

The modern condenser design has been around since the 1960s, brought about by two developments. Up to this point, condenser microphones used a tube for the amplification stage at the end. This required what can only be described as a hefty external power supply — the size and weight of a small cinder block. These microphones were neither portable nor durable. Dropping one was catastrophic.

The first was the growing adoption of transistor technology that helped miniaturize the final amplification stage and drive down the power requirement. The other was Neumann’s introduction of a standardized method of delivering 48 volts of direct current over a three-pin cable from the mixing desk. If this sounds familiar, it should. This standard was quickly adopted across the industry and became phantom power. Another key feature of phantom power is that it should not damage any connected dynamic microphones.

Phantom power effectively removed all of the restrictions on condenser microphones’ usage and portability. Removing the tube also made the design much more robust. The thought of using condensers out in the field and for live applications became a real possibility!

A condenser microphone’s most noticeable quality is the increased sensitivity when compared to dynamic microphones — the next most popular design. The great thing about a condenser capsule’s design is that its size scales well in both directions.

Let’s compare two popular vocal microphones: the Shure SM58 and Beta 87C. The Shure SM58 is a well-rounded dynamic cardioid microphone. Additionally, it has robust pickup for a variety of styles, from dialogue to rock and pop vocals. Its close relation to the Shure SM57 makes it a good drop-in instrument microphone. Take a few steps back and its qualities start to change. The drop-off in signal strength and pickup is immediately apparent.

In contrast, the Beta 87C requires less gain to achieve the same level of pickup. Even when adding distance from the source its sensitivity is more even and sustained.

Condensers used to struggle with higher decibel sources, in the range north of 110 dB. These limitations have mostly been addressed and many condensers now advertise their high SPL credentials. This explains why condensers weren’t always the first choice for close-micing sources with sharp and loud transients.

Dynamic microphones excel in noisier environments. Their reduced sensitivity pairs well with close micing sources, especially louder ones! They are popular for speaking engagements, live events, concerts and, of course, in the studio.

Condensers are not limited to just studio use and have plenty of outdoor applications. Their use takes on a more specialized role in the form of pencil condensers, shotgun microphones and lavaliers.

With greater sensitivity comes the potential for more sound to bleed through. Manage this by choosing microphones with more directional patterns and greater off-axis rejection. Further mitigation is achieved with baffles in and around the microphone.

I recall an extreme live sound micing case involving “The Prodigy.” A pencil condenser was positioned as close as possible to the hi-hat and shrouded by a vocal baffle to reduce the bleed from the kit and the rest of the stage. You can get away with bleed in some situations as long as it is coherent and mostly in-phase.

Phantom power is safe for use with the majority of microphones, with the exception of most ribbon mics. Regardless, always check if it is off. Also, take stock of existing connections before plugging or unplugging them — certainly before enabling phantom power! The idea is to avoid shocks to the system, or worse, damaging something.

Designs for all occasions

The advent of phantom power allowed condensers, in some ways, to become all things to all sound engineers. The design was no longer hamstrung by the fragility of tubes or took a huge mobility penalty because of the bulky power supply.

The Neumann KM184 descends from the coveted KM84 and continues the tradition of a clear and transparent capture. It handles high sound levels and is equally at home with all styles and applications.

This is a microphone that can capture high-energy drum performances or hang in a suspended array above a theatre stage, while flexing its clear off-axis capture. They come in single, stereo pairs and up to matched sets of eight!

The Sennheiser MKE 600 ticks all the right boxes. It’s a camera-mounted super-cardioid shotgun microphone with a 3.5mm to XLR converter. Also, this microphone can take phantom or battery power.

This category makes up the remainder of the condenser family that includes the standard and larger side-address microphones.

The original Bluebird was a good-sounding microphone that spent the majority of its time on room microphones and overhead duty. It did suffer from one drawback: a lack of a high pass filter and pad. This necessitated the use of a separate mic preamp that had a dedicated pad and filter switches. The microphone is also a bit on the bright side — something that a tube preamp helped balance out.

Enter the Bluebird SL, addressing the above shortcomings with dedicated pad and high-pass filter switches! This microphone is a true workhorse that’s at home with a wide range of vocal and instrumental applications. Combined with its stunning design, it always feels special to use.

Being the continuation of the C414B-TLII line, the AKG C414 XLII is recognized by its iconic gold screen. The XLII can switch between nine different polar patterns, adjustable pad and high pass filter switches. This microphone is an absolute gem for vocals and is a very capable all-rounder that lends a warmer tone.