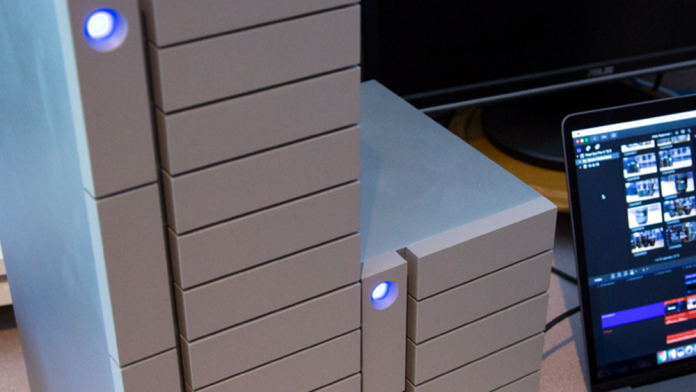 How much data do you manage? If you’re like us, you keep everything and throw nothing away. This is great when a video clip you need for production is saved in your archives, but keeping it all safe and having enough space is key.

Luckily, as storage needs have gone up, the price has gone down.  It's key to have enough storage to create security with redundancy through a RAID. Then, add in fast read and write speeds and you have the LaCie 6big and 12big.

LaCie announced the 12Big at NAB 2016. It’s a good fit too, because if anyone needs large storage, it’s video producers across the globe. The 12Big is configurable, and can be as large as 120 terabytes or as small as 48 terabytes. Capable of RAID 0, 1, 5, 6, 10 and 50 configurations, you’ll be able to keep your data safe. It’s built with 7,200 rpm enterprise-class drives with 64 megabytes of cache or greater. Each drive is even hot-swappable! That means reliability is the name of the game.

Later in 2016, LaCie announced the 6Big, the little brother to the 12Big. A half-size unit that is, in every way, half the size. With the same form factor only smaller, it’s built with the same enterprise-class drives. Although you can configure the 6Big the same way as the 12Big,  it doesn’t have the same breakneck read/write speeds. This, above all else, is the main difference between the two units.

Testing with the AJA speed test, our initial tests did not agree with Lacie’s. The numbers were not the same. Luckily, LaCie provided all the details from their tests, so we replicated them. Once we had the same settings, the results reconciled with LaCie’s numbers. One reservation we have is that to match the results, we had to test in a very specific way. But, the takeaway from our tests is that configuration is key to matching those numbers.

The 12big and 6big showed up at a perfect time for us at Videomaker. Over the last three years, we have created 24 terabytes of raw data. Unfortunately for us, that data was over five different drives and none of it had any redundancy. We were lucky that we didn't lose any of it. Using the 12big as the hub of all data and the 6big as a working drive, we migrated all our data into one place. Putting all the data on the drive was simple, easy and fast. It was our next step of moving that data to another drive, where we experienced some problems. Our house storage is a Thunderbolt 2 RAID. Because of that, transferring the data to that system was much more painful than our experience moving data to and from the LaCie RAIDs.

Thunderbolt 3 is poised to become a new standard with more and more storage solutions supporting it. Its adaptation has been somewhat slow, but most major brands now offer a Thunderbolt 3 solution. As we see it, one of the largest direct competitors to LaCie is G-Tech. They don’t offer a direct apples to apples comparative product, but they do get very close with their Shuttle XL Thunderbolt 3 line.

First lets look at the G-Tech Shuttle XL 96TB Thunderbolt 3 for $10,200. It’s 200 dollars more than the 12big, but has a more portable and rugged enclosure. The 12 and 6big should live on a desk, but the design of the Shuttle XL lends itself to go with you on your projects. Having a USB-C port is the biggest differences between the two products. LaCie has a leg-up on G-Tech with the USB-C connection. Although it has pitiful read/write speeds when compared to Thunderbolt 3, it’s not the speed that makes it handy. If you need USB-C and don't have Thunderbolt 3, the 12big or 6big are ready-use now. Though, it's less likely that you will need USB-C and not have a Thunderbolt 3 connection, it's a nice option to have.

The LaCie 6big and 12big offer loads of storage delivered quickly. They both can be set-up in many different RAID configurations, but they are costly. We love that they have both Thunderbolt 3 and USB-C connections. Both products are quite heavy, and should live in one place.

SUMMARY: You’re going to shell out some big dough for either the 12Big or 6Big. They offer large storage with plenty of redundancy options. But, in the marketplace they are reasonably priced when compared to the competition.

You’re going to shell out some big dough for either the 12Big or 6Big. They offer large storage with plenty of redundancy options. But, in the marketplace they are reasonably priced when compared to the competition.

Chris Monlux thinks many undervalue the data they store. He is also Videomaker’s Multimedia Editor.