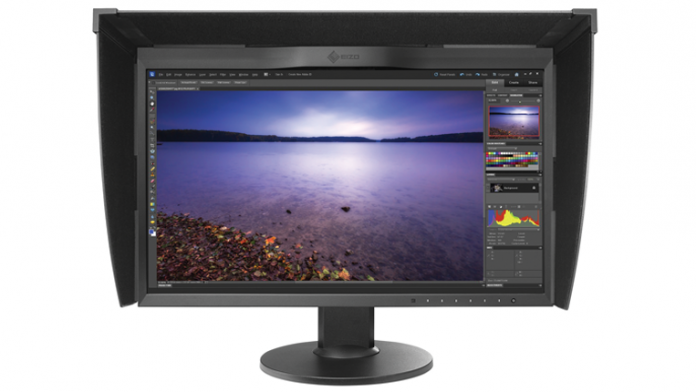 Luckily for Eizo, the CG248 fits a need for a color critical monitor for many professional videographers and filmmakers — but it’s not for everyone. Because of its hefty price tag, it could be a non-starter for many. That’s not to say it’s not worth it, but rather, if you produce video as a hobby or for a non-primary source of income, you likely won’t benefit from the high-end options that the CG248 offers.

It’s safe to say 4K is here to stay. From the GoPro HERO4 Black to the Panasonic GH4 and the Sony a7S II, UHD is the standard in 4K, with DCI 4K being the outlier in consumer electronics. It’s a good thing too since the CG248 offers 4K only in the UHD flavor. This could be a negative if you need DCI, but for most, it’s just what the doctor ordered.

When we first got the Eizo in, we noticed its weight — it’s a heavy one. Next to the Dell UP2414Q we used for comparison, the CG248 came in almost twice as heavy. The Dell came in at 10.58 lbs and CG248 at 20.3 lbs. However if you don’t include the hood, the Eizo only weighs 12.6 lbs. We like the hood and it’s cool that it’s included, but we would have liked to see a no-hood version for less money, as not everyone will need it. As expected, the monitor came with both a power cable and computer connection cable. We used the DisplayPort connection for both the Eizo and Dell to connect our Mac Pro with an AMD FirePro D700 GPU.

The overall build quality of the monitor is very nice. It’s stout and professional grade. The hood goes on easily and secures with the help of a few magnets. The stand-out feature is the built-in calibration sensor. It hides behind the bezel and can even be scheduled to self-calibrate. This is a stellar option for those needing a monitor that is always calibrated to be color critical — no need to calibrate manually or even own a external calibration device.

When comparing the CG248 to the Dell UP2414Q, the two monitors are quite similar. Both offer UHD resolution, a pixel density of 185 ppi, IPS display, 1000:1 contrast ratio and a viewing angle of 178 degrees.
The Dell had only one spec that was better than the Eizo with a response rate of 8ms versus the Eizo’s response rate of 14ms. At first glance, they seem the same, and even over the many different test images, the difference was little to none. However, that’s not to say they both perform the same.

The conclusion we came to during the evaluation of the CG248 was that it’s a professional-grade monitor whereas the Dell UP2414Q we compared it with is not — it’s a high-end consumer monitor.
The main differences between the Eizo and the Dell all came down to the professional options that Eizo offered. Pro features such as Self-calibration, hood, output options including broadcast and cinema presets like Rec709 and SMPTE-C, as well as 10-Bit Simultaneous Display from a 16-bit look-up table are what set this monitor apart from its consumer level counterparts.

When testing a monitor, it’s not just how one part of the monitor looks, but how uniformly it performs over the whole screen. Eizo boasts a Delta-E difference of 3 or less across the screen, and that’s impressive. It also offers a zoom-in function for checking a section of the screen for a close up look at the color or any other thing you would like to look at with a critical eye.

Eizo says that it reproduces 99% of Adobe RGB, and compared to the Dell, the colors are the same. Pulling up test images, the Eizo passes each test with flying colors — not one shortcoming when it comes to picture and color reproduction.

The CG248 by Eizo looks fantastic, calibrates itself and has constant performance across the whole screen. Any studio, broadcast station or production house would benefit from this strong performer.

Our biggest hang-up is its cost. Is it worth the $2,750 price tag? Yes, but to justify it, the CG248 would need to be a tool used to make money. If the work you do doesn’t require the color to be perfect, or if you’re creating because you love making video and don’t make big or small bucks in the productions you create, then this monitor is not for you. You’d be better off with a consumer monitor that isn’t as precise, maybe doesn’t offer as long of a life and may not give you all the deep professional options.