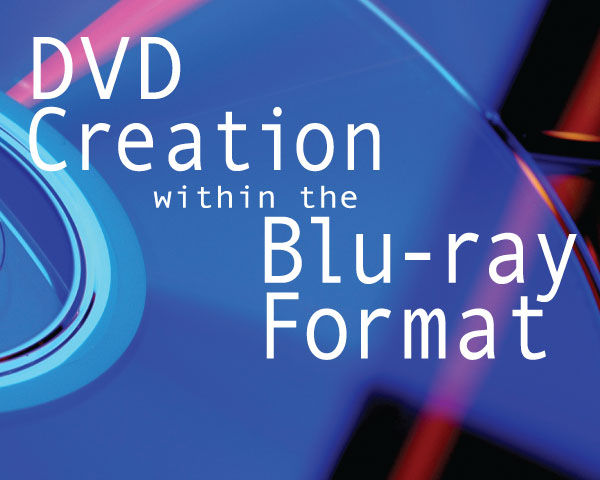 How can you share these productions in their full HD glory? One answer, of course, is to export your HD video clips to play back directly on a PC, for example in QuickTime or Windows Media Video format. You can also now share online by uploading in HD to video sharing websites, usually in Flash or MPEG-4 / H.264 formats. These options typically are built-in to video editing tools, consumer and professional, with presets for these formats, and even direct uploading to popular sites.

But you still need to use a computer to view these clips, and they are simply linear movies, to play from beginning to end. What about burning and sharing your productions on disc, and with interactive menus and controls – as we do with DVD discs for standard-definition material, but now in full HD quality on your big widescreen HD display?

This is, of course, the promise of the Blu-ray disc format – a bigger, better DVD, jumping from 4.7 to 25GB capacity (per layer or side), with the ability to present HD video and audio. Blu-ray also offers a big advance in interactivity from the DVD’s built-in menu navigation, with support for general Java-based programmability. As a result, Blu-ray can provide features including pop-up menus and interaction overlaid on video as it is playing, general games and other applications, along with Internet access and downloading.

However, don’t expect to see all these features implemented on every Blu-ray player, or used on every commercial title, or supported in every Blu-ray authoring tool. For example, while early Blu-ray players only supported basic playback, later players added Bonus View features, with picture-in-picture and local storage, and then newer full BD Live players added support for Internet access for downloadable bonus content. (The Sony PlayStation 3 has been a de facto flagship for these new features, with firmware upgrades to support these enhancements, and reportedly will be again upgradable to support the new Blu-ray 3D format.) 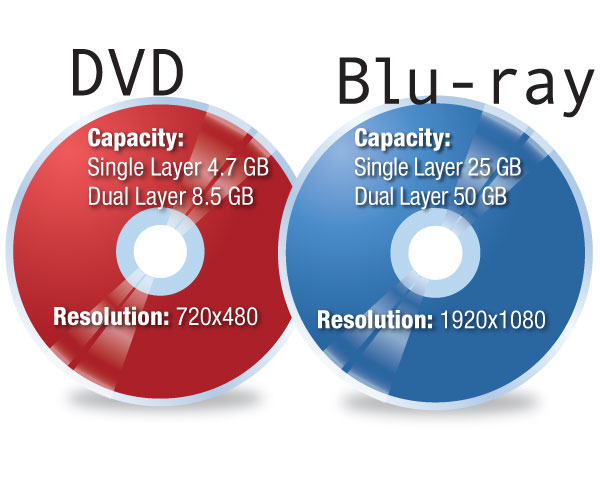 Similarly, the Blu-ray specification supports a variety of formats for storing video data on the disc, from the relatively simple AVCHD format with a series of HD clips (also used in HD tapeless camcorders), to the BDMV format (Blu-ray Disc Movie) with DVD-like menu structures, to full BD-J (Blu-ray Java) with custom programming. Blu-ray authoring tools then typically use these same terms to describe the options for creating a Blu-ray disc. Generally, you can choose AVCHD to quickly burn a simple disc with a group of clips. Or you can author a disc as BDMV with traditional DVD menu navigation, but now with HD content. And newer tools support creating a flashier BD-J disc with advanced pop-up menus displayed over playing video.

Plus, there’s even better news if you’re just getting started with HD authoring – You don’t actually need to have a Blu-ray burner or burn a Blu-ray disc in order to play HD content from a disc. Instead, you can get started by burning HD content to plain old DVD discs using the AVCHD format. At least some set-top Blu-ray players then can play these DVDs, including the Sony PS3, so you can show your beautiful HD content on your HDTV. 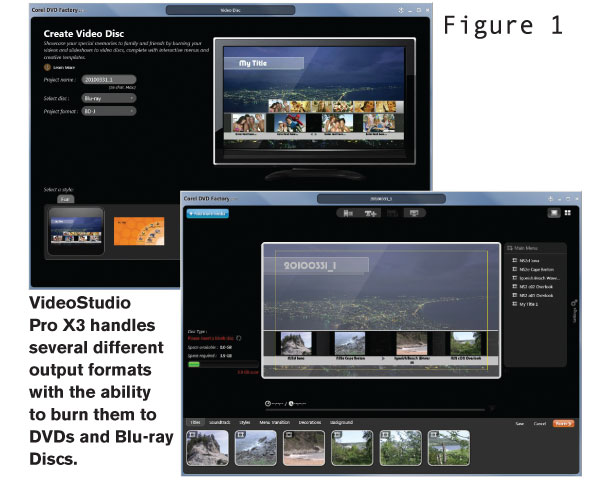 One example of a consumer video editing tool with a range of Blu-ray authoring options is Corel VideoStudio Pro X3, released in January 2010 for $100 (or $150 bundled with Corel PaintShop Photo Pro X3 for photo editing) (See Figure 1).

The core VideoStudio Pro X3 application actually has become advanced enough that Corel included two additional “easy editing” components in the product for beginners who are not yet up to the enthusiast level: VideoStudio Express 2010 for quick assembly of clips into movies, and DVD Factory Pro 2010 for authoring and burning in a variety of formats. Recently Corel has also added DVD MovieFactory 7 SE to VideoStudio Pro X3 for more advanced disc authoring to better match the level of VideoStudio Pro.

DVD Factory Pro combines simple drag and drop authoring with support for a variety of DVD and Blu-ray disc formats. To create a disc, first use the built-in Media Organizer to collect and organize your media, importing from a wide variety of devices and formats, editing and enhancing clips, and even exporting individual clips and transferring to an iPod or other portable media player. Then you can assemble a group of clips to create a video, audio, and data backup disc.

For DVD, you can author a standard DVD-Video disc, using pre-defined menu templates customized with the layout, background image and music, animation and transitions, titles and graphic decorations. But also for DVD, you now can import high-definition content and create an AVCHD disc, to view your HD material on some Blu-ray players. Then when you have a Blu-ray burner, you can choose from three different formats for high-definition discs: BDMV with standard DVD menus, BD-J with pop-up menus over video, and BD-J Calendar (popular in Asia). 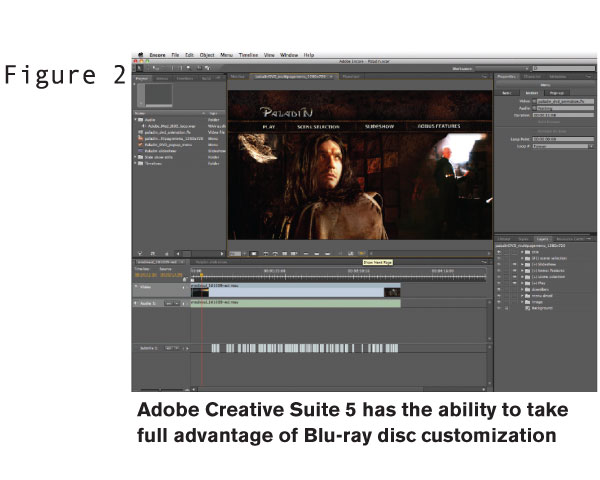 The latest version of the Adobe Creative Suite, CS5, was announced in April 2010, with new versions of some of Adobe’s tools, available in the familiar Design, Web, and Production suites. Pricing for individual tools is unchanged from CS4 (Premiere Pro is $799), and the CS5 Production Premium suite is $1699. (See Figure 2). The CS5 Production Premium suite now includes even more options for exporting your productions in HD formats. Of course, you can export files directly from Premiere Pro CS5, and via the Adobe Media Encoder, a separate shared component for automated and batch encoding, now also accelerated for native 64-bit rendering. Premiere Pro also includes Adobe Encore for authoring to DVD and Blu-ray discs. Encore imports layered Photoshop files to define the menu structure for DVD and Blu-ray discs, including pop-up menus.

Encore CS5 adds a new multipage menu format that allows you to define a series of nested menus, like the main menu and scenes menu, which would require clicking between multiple menu pages on a DVD. But on Blu-ray, these can appear as pop-up menus, so users can browse through multiple menu pages without interrupting the playback of the audio and video.

Encore further leverages your authoring work by also delivering your DVD or Blu-ray projects as interactive Web DVDs that can be viewed online, or on your computer with the Adobe Flash Player. These provide the full disc experience, with the interactive menus and subtitles, plus pop-up menus and high-resolution video for Blu-ray projects. Encore CS5 also adds a new search interface that uses keywords automatically generated from your project metadata, including menu and button names, subtitles, and speech analysis text.Then to extend your sharing online, CS5 adds a new tool, Flash Catalyst, for creating interactive Flash productions without programming. You can import layered media, add interactions, and augment with video and sound effects, with custom playback controls.

The Blu-ray Future is Now

So high-definition video is here, with fun new options for sharing your video productions. You can display your work on your computer monitor, upload to share over the Web, design interactive presentations, and burn to Blu-ray discs to enjoy on HD compatible screens.

This is a time for experimentation, as new tools introduce different options and more advanced capabilities. So go ahead and check them out – download the trial versions to see how you like the application features and workflow for your needs, and see how they work on your particular system and with your specific types of HD content.