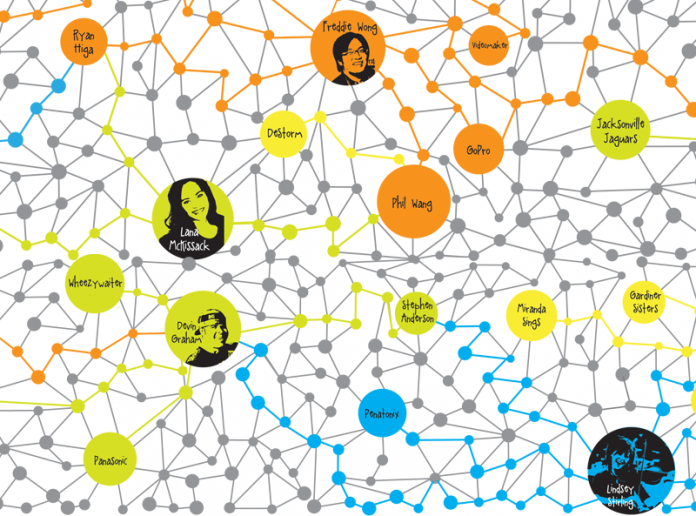 Before the appearance of the Internet and, more specifically, the birth of the social video-sharing website YouTube in 2005, building an audience for even a single film was a monumental endeavor. Now video producers can start to build an audience with the clicks of a few computer keys. And for those who want to invest a bit more time and effort, collaboration can earn you many more active audience members.

YouTube has implemented many ways to connect with like-minded media consumers and creators of the moving image worldwide in their nine-year existence, but cross-promotion & collaboration may be the best tools yet. Let us show you how you can grow your audience in ways you may never have thought possible.

On its most basic level, YouTube makes it easy for filmmakers to reach people interested in watching the types of videos they are producing. For example, if a filmmaker made a four-minute video about an organic, permaculture chocolate farm in Panama, tags would be added upon upload such as “organic,” “permaculture,” “chocolate,” “Panama,” “Central America,” etc. This way, anyone searching for any of these topics would have an easier time finding this video.

However, we need to go one step further. The foundation upon which you will build a large fan base starts with subscribers, not just viewers. You may have watched videos where the creator implores you to “Like” the video and “Subscribe” to their channel. Having large “view” and “like” counts are important, but a large number of subscribers opens all new doors.

Many will subscribe to your channel if they like the vein of your work. Keep this in mind when uploading videos. You probably want to keep your channel to a specific niche. For example, your travel video channel should not be filled with videos of your nephews and nieces or your best video game results. Put those clips on another channel. Stay specific and fans will want to see your next production by subscribing to your channel.

But it gets deeper. YouTube is now encouraging more advanced users to think beyond the concept of your immediate fans and followers and to engage directly with your fellow YouTube creators. By fostering relationships with like-minded producers, you can grow your own audiences even faster than previously possible.

In as few words as possible, collaboration is working with other video creators to cross-promote content between channels.

For those who want to invest a bit more time and effort, collaboration can earn you many more active audience members.

Collaborating takes time, it’s not just a click of a button. You will need to foster relationships, plan events with your collaborators and execute them. Lets look at a few ways that YouTube suggests you take advantage of collaboration.

Demographics is defined as the statistical data of a population, according to Dictionary.com. In simpler words, what type of people are — or should be — watching our videos? If we are shooting GoPro footage of base-jumping or whitewater kayaking off of 20-foot waterfalls, are we interested in spending a lot of time trying to partner with producers who make video for senior citizens or nomadic goat herders in the Sahara Desert? Probably not. Identify and understand your audience.

Organize an appearance in your collaborators’ video and vice-versa. If a picture is worth 1 thousand words, video is worth 1 million. If you can’t physically appear in your collaborator’s video because they live 5,000 miles and an ocean away, video Skype in or produce a pre-shot video and send it to them so it appears within their program. Consider video chats or Internet Hangouts with each other. And the easiest “appearance” could be a “shout out” or positive mention.

Help their audience find your channel by using annotations, playlists, links or any other way within the video or in the About section of their video’s YouTube page.

It takes a lot of time and effort to organize a collaboration but your work doesn’t stop there. Once the collab is live, you should be present and active with your potential future subscribers. Leave comments on the video’s page and be sure to answer any viewers' questions, tweet on Twitter, post on Google+, put something up on Facebook, pin to Pinterest, post to tumblr and Instagram and how about LinkedIn. Remember, we said it wouldn’t be as easy as a click of a button but a bit of personal interaction can go a long way.

How To Find Collaborators

There are a few ways beyond a random search to find fellow filmmakers to collaborate with but one of the most efficient, according to YouTube, is through the YouTube Top Fans tool. Sign in to your YouTube account, click on your profile picture in the upper right corner of your YouTube page, click on the Video Manager link which will appear in blue just to the left of your profile pic and click on COMMUNITY on the left side of the page after the jump. If you have a large enough number of subscribers, you will see a Fans link option appear under the word COMMUNITY. If you don’t, like Nomadic Frames doesn’t, you won’t see it. Get more subscribers!

Another page Nomadic Frames does not have access to, due to not having enough subscribers is the Insights page. Insights lets one see which videos their fans are watching and the channels they have subscribed to. This could be a treasure trove if you have a large following. You will need to connect your YouTube channel to Google+ to utilize Insights.

Another, more obvious technique, not to mention easier, is to find which of your fans are also creators. This may be more time consuming, but anyone with any amount of followers can do this without having to worry about connecting to other forms of social media or having the right amount of subscribers.

A big collaboration success story happened to Sarah Dussault, a.k.a SarahFit who, at the time of publishing, has more than 170,000 YouTube followers. “If I could pinpoint the specific events during my YouTube career that really helped propel it to the next level, it honestly has to do with collaborations and working with other YouTubers,” said SarahFit, during an interview with Tim Schmoyer of VideoCreators.TV.

“Surround yourself with successful people and don’t be afraid of competition… build those relationships that you already have,” SarahFit said. “If someone starts getting really popular or you start getting much more popular than someone else, don’t lose that friendship. I still am very good friends with a lot of different YouTubers that started at the bottom and now they’re way above me and if I had just stuck my nose up at them in the beginning, I would have missed out on a lot of cool opportunities.”

SarahFit reached out and custom built a workout for one woman who tweeted that she needed flatter abs, expecting nothing in return and the woman gave SarahFit a shoutout in a video a couple of months later. That single mention brought SarahFit 10,000 subscribers, which was a lot for her at the time.

Collaboration can come in many forms. Here is a fine and funny example of celebrity collaboration between comedy crew Barely Political (more than 3,500,000 subscribers at time of print) and the world’s most famous skateboarder, Tony Hawk: Tony Hawk Skateboarding Secrets!

One of the more unusual collaborations, and one of our favorites, comes from Jerusalem born Ophir Kutiel, better know as Kutiman. To produce his ThruYou project, Kutiman collected sound bites, samples and other audio bits from musicians on YouTube to create entire songs and finally an album. ThruYou received more than 10 million views in about two weeks. This earned him a mention in Time magazine when they named it one of the “Best Inventions of 2009.” After this touch of fame, well-known acts such as Maroon 5 came to Kutiman for collaboration.

Third party apps and websites are beginning to get in on the collaboration gig. FanBridge makes Channel Pages, which they call a “collaboration engine for YouTube channels & video marketers.” It is easy to set up and it is YouTube Certified. It is free to list your channel and there are paid sponsor opportunities. Once you sync your YouTube account you can search for collaborations and be found by other mediamakers or a wider content creator community. There are articles written about Channel Pages in Forbes and other internet and tech publications if you want to learn more or just go to their website.

Get Down to Work

Collaborating is not easy work, you’ll have to put in time and effort, but by collaborating with like-minded video producers, you can accumulate audiences far bigger than previously imagined. Plus, you might just make a few new filmmaking friends.