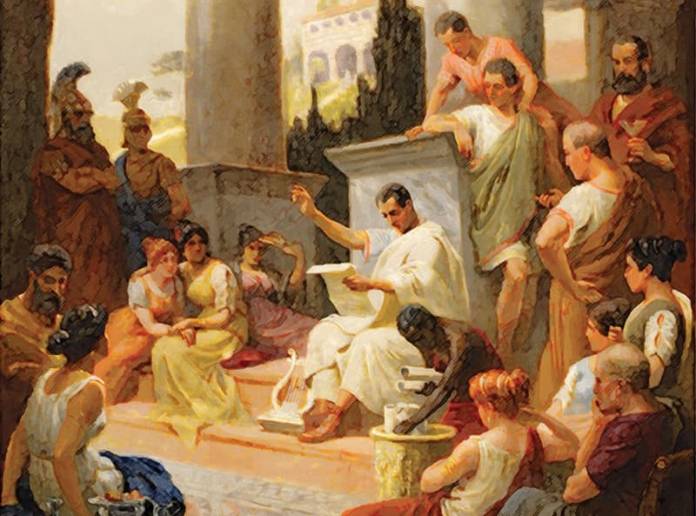 It turns out there is a formula that describes the structure of many dramas: Freytag’s Pyramid. Here we explore how to write compelling stories using time-tested dramatic structure techniques. Stories for the big or small screen all use it. This classic structure promises big payoffs in the success of your next scriptwriting undertaking.

The Origins of Storytelling

Let’s begin with a quick chronicle of the structure of storytelling. The earliest stories in human history were told aloud. In small communal gatherings, early humans recited stories from memory with the goal of transferring knowledge and experience. These stories used the oral tradition to pass essential information from generation to generation. Examples include where to find food, or how to avoid deadly predatory animals. Now that’s an important story!

Long before the printing press, storytellers found a way to reach a larger audience on the stage of a theater. In this setting, a large group of people assembled at the same time and place to enjoy the play. With the invention of the printing press, storytelling became more accessible. Unlike the stage play, book reading doesn’t require gathering in one physical place. Mass media was born and drama found a new, larger audience.

Gustav Freytag (1816-1895) analyzed Shakespearean and ancient Greek drama; he developed a model based on his examination of the structure of those plays. The model, first published in his book Die Technik des Dramas in 1863, is known as Freytag’s Pyramid. The German playwright and novelist’s concept of dramatic structure also goes by the names of Freytag’s Triangle or Dramatic Arc.

Freytag’s analysis revealed a structural pattern in Greek and Shakespearean dramas. He found that the parts of plays fell into five consecutive components: exposition, rising action, climax, falling action and dénouement. In a stage play, these parts often become the five acts that comprise the production.

Even though Freytag’s analysis applied primarily to ancient drama, the model can be implemented in the contemporary television and film. However, they rarely involve the clearly defined acts that Freytag’s model describes. In fact, you’ll find the model in everything from Modern Family, to your favorite crime drama. You’ll find opportunity for the purest form of Freytag’s Pyramid in a full-length feature screenplay.

The Five Acts of Freytag’s Pyramid

Let’s take a closer look at each element of Freytag’s model as it relates to filmmaking.

The “exposition” stage gets viewers up to speed by giving them important information. It introduces the protagonist and other major characters, geographic setting, time in history and the overall premise of the story. Accidentally omitted details might leave an audience scratching their heads while trying to make sense of a story. Not good.

One unique exposition example is Alfred Hitchcock’s classic Rear Window. The Film has the camera move about the protagonist’s apartment. It gives viewers much needed details to understand the soon unfolding story. These details include the character’s name and occupation and the reason why he has a cast on his leg; it sets the temperature of the blistering air; and it introduces several of the neighbors by looking through the aforementioned rear windows of the protagonist’s apartment. All of this occurs before delivering a single word of dialogue.

Another exposition choice could involve a voice-over narrator who provides viewers the back-story at the beginning of the production. Forrest Gump is a masterful example of the effectiveness of using narration as part of the film’s exposition stage.

The second part of Freytag’s storytelling model is “rising action”. Here a series of related events build tension leading up to the apex of the pyramid. In the film Stand by Me, four boys spend time in the rising action portion of the film. They follow railroad tracks leading to the dead body they seek to discover at the story’s climax.

As its name implies, the climax is a turning point and the point of highest action — the moment of truth. Titanic (1997) has a clear point of climax, but flashbacks make it harder to identify all parts of Freytag’s model. In Rear Window, Hitchcock chose to present the climax near the end of the film. This leaves very little time for the next two parts of Freytag’s model. The only imperative in the model is the order of the five parts; the timing and duration is the purview of the scriptwriter.

After “climax” comes “falling action” where the struggle between the protagonist and antagonist ends with the protagonist’s success or defeat. It’s common for this stage to include a moment or two when the audience doubts the final outcome.

Let’s make up an example from a science fiction plotline. Will our protagonist really be able to thwart the alien invader before the destruction of New York City?

Finally, the “dénouement” — an original French word meaning “to untie” — gives the story closure at the end. In Nebraska, Woody, the aging alcohol-addled protagonist, attempts to claim the million dollars a sham marketing letter promises him. Woody’s sole desire is to buy his first new truck and leave money for his two sons. (As a warning, the rest of this paragraph contains spoilers). In the end, Woody’s son trades his own car in for a truck. This allows Woody to proudly drive the new truck down Main Street of his hometown. Now that’s a happy ending!

Freytag’s Pyramid is a Classic Formula

Unlike the stage play, video offers technology that adds new tools for storytelling. An instantaneous flashback to childhood is easy thanks to video editing, but harder to pull off on live stage. Green screen technology can instantly change locations from beach to mountains to jungle. Such technologies give modern filmmakers the tools to adapt Freytag’s rigid model into something less formulaic.

Whether it’s a blockbuster Hollywood movie or a YouTube sensation, the formula for telling an amazing dramatic story is similar. Try some of these techniques and see if they don’t take your work to the next level. 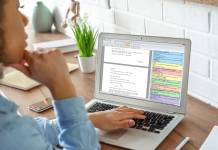