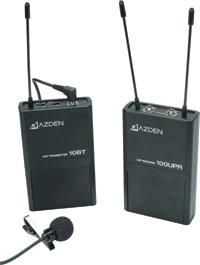 Azden, a long-recognized name in the low-budget wireless microphone market, offers the 100LT UHF Wireless Lapel Microphone System, a basic kit that includes a lapel microphone, a transmitter and a very small receiver. Aimed at videographers who want to incorporate wireless microphones in their productions, but don’t want to sell a car or take out a second mortgage to pay for it, the 100LT kit is best suited for short-range hobbyist work that doesn’t require top-notch audio fidelity.

Opening the box, we find that along with a 10BT transmitter, a 100UPR receiver and an EX-503 electret condenser microphone, the kit includes a short (3-foot) 1/8-inch monaural cable, a small tool for making adjustments to frequency and output levels, a pair of Velcro strips with adhesive backing, a slim 8-page manual and no batteries. Here’s how it’s designed to work: the talent clips the microphone on and plugs the mike cable into the transmitter, which clips onto a belt or pocket. Using the supplied Velcro strips, you mount the tiny receiver (which is about the size of a pack of cards) onto your camera or tripod and plug the 1/8-inch cable into the microphone input jack. Voila, you’re ready to shoot.

While the setup of this system is simple enough, we noticed right away that the Velcro method of securing the receiver to the camera is a kludge at best. If you’re like us, then you’re not crazy about the idea of messing up the clean surface of your camera by sticking an adhesive Velcro strip to it. Also, it’s difficult to find a way to operate the camera hand-held with the Velcro-mounted unit, but tripod-mounted camcorders will work well. A useful accessory upgrade would be a shoe mount, assuming your camcorder has an accessory shoe to mount it on.

To test the 100LT system, we clipped the microphone to the lapel of a willing participant and stuck the receiver to a tripod holding a Sony Digital8 camcorder. With headphones on, we picked up a strong signal as long as we stayed in the studio with the camera and didn’t move around too much. With the talent’s body facing away from the camera, we did encounter brief loss of signal, but as long as there was nothing between the transmitter and receiver, the signal was strong. The receiver has two antennas, but don’t be fooled: it is not a true diversity receiver. The 100LT system can switch between 63 channels, so you will almost certainly be able to find a clean channel, even in large cities with big media markets. We switched through a few channels in our very small market and found all of them to be clear.

Moving outside, we noticed a similar picture: so long as there was nothing in between the transmitter and receiver, the signal was good, but as soon as anything got in the way, the signal began to break up. This means that if you’re planning to use this system in your productions, you have to plan accordingly and coach your talent. The range of the unit outdoors is not terribly long; we noticed an increase in signal loss at about 30 yards. Interference was more noticeable at this range as well, with noise levels rising sharply at about the same distance. Panning, tilting or otherwise moving the camera also brought a notable drop in signal strength.

Audio recorded with the 100LT was quite good–assuming you are getting a strong radio signal. To be certain, audio professionals will find plenty of fault with the quality of the sound, but the Azden 100LT delivers an acceptable, even pleasant vocal tone, a little bit flat and lacking in resonance, but more than acceptable for hobbyist use. The fact that the 100LT places the microphone closer to the talent’s mouth in itself greatly improves the quality of hobbyist videos.

While it does have its drawbacks–the tendency to lose its signal in imperfect conditions being the worst–the 100LT sounds pretty good and is a very compact solution that will fit right in your camera bag. With the proper precautions, the improvement in the audio quality of home videos shot with the 100LT compared to just using the on-camera microphone is significant. We do not, however, recommend the 100LT for any kind of professional use. The big advantage of this system is that it offers 63 selectable channels, which will almost guarantee that you can find a clear channel. If you can find this microphone system for significantly less that the MSRP, it might be worth it, but we feel that $450 is excessive.

The 100LT is a good choice for hobbyists if the price is right.