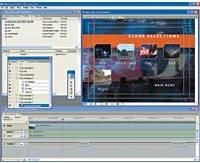 We’ve been working hard with Encore for over a month now. It is a good app for the non-Hollywood professional market, with its primary strength being its integration with Adobe’s other apps (Premiere, Photoshop, etc.). Encore is a Windows XP-only product. Macfficionados and Windows 2000-based production houses are out of luck. It’s not yet perfect, but if you live, work and breathe Adobe, Encore is the DVD authoring app you have been waiting for.

Feature-wise, Encore is well equipped, but not exceptional. It’ll do all of the basics: MPEG encoding, stereo Dolby Digital encoding, motion menus, burning and so on. For professionals who create thousands of DVDs through a dupe house, you can output to DLT, which is a critical feature. It also has some advanced (but not unique) features, such as integrated subtitling, multiple video tracks (for multi-camera productions) and multiple audio tracks (for other languages).

The user interface is clean and functional, which is about the highest compliment we can give any program. It’s not intuitive the first time you run it, but we found that new users who are familiar with the basics of DVD authoring can be productive within an hour. The organization of the tabbed project window and the disc timeline are very straightforward. The more advanced windows, especially the project properties and management tools, are all very informative and accessible.

Designing the navigation of your disc is a good example of the overall workflow. Encore doesn’t use a flowchart layout to graphically represent disc structure, which is a feature we really like in Sonic ReelDVD (and upstart Media- Chance DVD-lab) and which we sadly miss in the new version of Apple’s DVDStudio Pro 2. To link a submenu to a button on the root menu in Encore, all you need to do is drag the submenu from the list in the Project window to the button that you want to link it to. When you select a menu or menu object, its properties are listed in the Properties window, which is a very common behavior across many design environments, from software programming to Web design. In the Properties window, you can verify a button’s link to the submenu or manually enter a different link. Automatic inter-menu navigation between buttons worked very well and it wasn’t too difficult to manually change the button order in our menus.

While the technical side of DVD creation can be intimidating, it shouldn’t be confusing, and Encore does a fine job of keeping your projects together in a logical way. The fun side of DVD authoring is layout and design, however, and this should primarily be an artistic challenge.

Encore behaves a bit like Photoshop UltraLight for menu design, especially in its use of layers. If you already use Photoshop, even casually, many of the concepts of graphical layout and design in Encore will be familiar to you. Encore works just fine all by itself for menu design, but it is not Photoshop.

Ultimately, professional DVD authoring is a modular affair with Adobe’s suite of software. While you create navigation linkages within Encore itself, Photoshop is where you will actually create your menus. This allows artists who are comfortable with Photoshop to work with a tool they already know. Once the menus are done, the Photoshop files are essentially Encore-ready drag-and-drop templates.

Perhaps the coolest aspect of this process is that all of the layer properties (e.g. transparency) and filters in Photoshop are applied to the DVD menus, including any video files that are used as motion menus or motion buttons in Encore. So now you can use Photoshop filters on your video.

Even if you are a one-person shoot-edit-author production studio (and many of us are), the workflow from Encore to Photoshop and back to Encore is brilliant. You don’t even need to close (in Encore), open (in Photoshop), edit, save, close and re-open (in Encore again) menus: the two products really act as one.

The first version of Encore is not perfect. We’ve been working the app quite hard and have experienced a couple of crashes, but nothing that has caused us to loose any work. We were surprised to see a tiny bug in the release version that was not in the beta: the pixel aspect ratio button on the Preview window was broken. This minor problem has probably been fixed by the time you read this, but we mention it here to illustrate that this is the sort of imperfection that we’d expect from a first-generation application. Overall, the program is very stable, however, and we are really talking about rare and spurious events that are not in any way interfering with our everyday commercial production work.

Lack of templates seems to be the most serious limitation of this product for casual home users, but for professionals (or even part-time weekend shooters, folks with paying day jobs and wannabe pros), Encore is a tool worth learning. Adobe’s astonishingly aggressive authoring bundling of Encore and Photoshop in the $800 Video Collection make this one scary software suite for the competition (Oh, yeah: toss in Premiere Pro, After Effects and Audition at that price, too).

Encore and Photoshop combine as an authoring dream for Adobe fans.