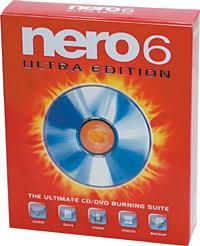 Burning a disc is perhaps the least glamorous aspect of DVD creation. Sure, encoding may be tedious and technical, but at least you can be involved in the encoding process (if that’s your thing). When we burn, we just want to click a button and be done with it. That’s what Nero is for. Ahead Software’s Nero software has been around almost since the first CD burners hit the store shelves and you may have a version on your PC right now.

One big change we noticed with version 6 was that installation was much easier. Nero 5.5 (and some earlier versions) needed to detect your specific CD burner model to work properly. This could result in two problems. First, you might need to manually tell Nero what brand of CD burner you were using, and we’re guessing that most of you are like us: we don’t know (nor care) what drive we have, as long as it works. Second, there are brand new drives coming out all of the time, with some of the least expensive ones coming from (relatively) unknown Taiwanese OEMs. With Nero 5.5, you might have to go online and download a patch to get Nero to work with your new drive. Nero 6 does not appear to have these limitations and simply worked with all of the drives we tested.


Nero installed flawlessly and effortlessly, just as it should, but we were alarmed by one thing: if we just wanted to burn CDs, why do we need 500MB of disc space? Actually, a minimum install occupied about 123MB and still included a number of basic disc utilities, which is smaller than the minimum install for Roxio Easy CD & DVD Creator.

We approached this review from the point of view of the person who just wants to burn (JWTB) a disc. We found a couple of people to perform these usability tests, so let’s start with those results.


The SmartStart technology is nothing more than a startup dialog that organizes the various options visually. Even so, there are still six main task choices, 13 total buttons and no less than 26 sub-options to select from in Standard mode. The application was slick and attractive, but it took our JWTB subjects a bit of time to read through all of the options to find the proper item to click.

We also spent some time analyzing some of Nero’s more advanced features. We did discover that we could not burn across our network, which we could do with the Roxio product. After mapping the drives locally, Nero had no problems with the path names.


We launched the familiar Burning ROM interface and set to work. As with previous versions, you can burn just about any kind of disc imaginable, although our tests did not go that deep. The various utilities are very interesting from a technical perspective and could really help in troubleshooting problems and tweaking your drives.

NeroVision Express 2 (not to be confused with Nero Express) is the simple DVD authoring program that comes with Nero 6. It is an all-in-one capture-author-encode-burn application. It is fairly conventionally template driven and offers some basic trimming and editing tools, including adding transitions, titles and audio. The combination of editing and authoring into a single program means that NeroVision Express can be complex to learn. The MPEG encoder is fast. NeroVision can capture, encode and burn to DVD+RW (in this case known as DVD+VR) on the fly. It was not entirely easy to figure out how to do this and the program did not provide much feedback during recording, but it was certainly easy to do. Because of the heavy processing going on, especially the MPEG encoding, Ahead recommends at least a 1.6GHz CPU.

We did experience a couple of crashes during our tests, for various reasons. Only one of them happened during an actual burn. The program displayed a blank error message before it terminated, so we aren’t sure what happened. Fortunately, the burn involved a DVD+RW disc, so we could repeat the process without loss. We did find that a couple of our crashes were repeatable. For example, when you drag DV *.AVI files into the /VIDEO_TS/ folder on a DVD project, Burning ROM crashes. Now, we know you can’t use DV *.AVI files on a DVD and we also know that the easy answer to preventing this internal error is "Don’t do that then." We would prefer that the app have an error trap to catch this user mistake, however.

Certainly the best news with this new version, from our perspective, is that there is no more nonsense with the installation process. We’ve always liked Nero and appreciate the standard and pragmatic main workspace. The technical tools and utilities are impressive and easy to use. Although the repeatable crashes are disturbing from a quality control point of view, at least the program did not crash in a random manner. The distinction is important: Nero 6 was very stable. Once we found crashy bugs, we could easily avoid them, but that’s what software QA teams are for. This review really only touches on a few selected aspects of an outstanding program that continues to undergo an informal review here in our labs. In other words: we continue to use Nero Burning ROM on a daily basis.