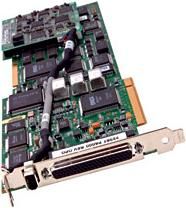 
Media 100 was a forerunner to today’s affordable, Mac-based computer editing. Prior to its arrival on the scene in the early 90s, the mystique and power of nonlinear editing was for the multi-million dollar post-production suite where professional editors performed their magic. But Media 100 brought products to market that mere mortals could afford. Not everyone could enjoy the medium, but it was a start. We’re pleased to see new products from Media 100 that are within the grasp of the consumer.

Made for Each Other

The Media 100i 7.5 LEDV board set, breakout cable and software package has a modestly expensive, $2,995 price tag. Since you have to add the cost of a Mac G3 (or better) and a monitor, the system can elevate into a fairly expensive (in consumer terms) workstation. Media 100 cannot send you a turnkey set up because they cannot sell Macintosh computers. However, in our experience, with Media 100’s tech support, putting together a system should be rather painless. One overriding factor in the self-integration scenario that should be considered is that when you purchase a product from Media 100 you get a complete complementary solution of hardware and software that have been developed together. The hardware and software each were made with the other in mind.

I Expect You to Edit, Mr. Bond

We tested the Media 100i 7.5 LEDV in a custom configuration we received from Media 100. The Media 100i line of Mac-based products come in ascending order: the LEDV, LX, XS and XR. Each has increasing input/output options, resolution enhancements (up to and including uncompressed) and real-time functions as you climb the price ladder. The setup we had used a Powerbook G3/500 and a Magna PCI extension to house the board and A/V drives (two Cheetah 36GB, 10,000-RPM SCSIs).


We hooked up several different consumer camcorders to the FireWire connect to get a feel for how well Media 100’s DV communication would perform. The Media 100i 7.5 LEDV had no trouble with acquiring and controlling a Sony PC5, a Canon ZR30MC, and a Panasonic PV-DV950, although we did experience a lack of shuttle control in our review unit and had to opt for fast-forward and rewind in the transport window to move around the tape.

We captured some footage to begin our test, and noticed that the batch capture function is not available for the LE version as it is on the other versions. Although batch capture was not included, the included RS-422 analog machine control took over in this edition. Next, we brought in our footage, arranged our shots in the intuitive bin and folder structure and began dropping shots onto the timeline. The Edit Suite window in the Media 100 environment is a thing of beauty. One window transforms from capture to edit-clip to transitions to effects very elegant. The timeline was flawless and never hesitated performing any of our moves. The Media 100i 7.5 LEDV presented no hang-ups, annoying pauses or wacky redraw anomalies, and was truly a pleasurable video-editing tool. We input some analog footage in thru the S-video connect and were very pleased with the image that was digitized. We put together a short program with transitions on the Media 100i A/B video tracks and added music and titles from the bundled Boris Graffiti. We enjoyed perfect, real-time playback functionality. In addition, output back to tape was perfect and our program was inserted into our tape at the defined time code location.

The addition of Boris Graffiti as a motion-titler is definitely a plus. It is a creative, easy-to-command titler that goes well with the Media 100 software, although you have to spend some quality time to master it. Another notable product feature is Media 100’s Event Stream for Web video. Event Stream allows you, for example, to define "hot spots" where the viewer can click an area on the screen that has been determined on the timeline edit to either open a URL or jump to another page. This interactive video-editing tool is very exciting and easy to use.

Sadly, one of the aspects that continues to plague the Media 100 editing environment is its lack of attention to audio editing. The graphic representation of the waveform is at best a distraction and almost unusable. The audio tracks display a jagged line that conveys the amplitude of the wave, but trying to decipher the character of a word or the section of a musical piece from the view on the timeline is awkward and unrewarding. Software products with none of the acclaim and a fraction of the price point of Media 100 have taken on audio editing and mixing and have soundly (pun intended) put it to shame.

Some portray Media 100 as moving away from broadcast and production video in favor of Web designated content, but those reports are way off-base. Media 100 has always been touted for its broadcast-quality output and variety of I/O options. Media 100i products will also export directly to Adobe After Effects, which saves time and disk space by not requiring a media conversion for export. The Media 100i 7.5 LEDV not only outputs to DV and analog video for traditional purposes, but also adds all popular Web streaming and MPEG codecs.