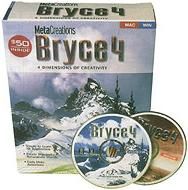 First, there was Bryce, a clever yet powerful 3D landscape-creation software package that allowed users to easily produce their own artificial mountains, canyons, forests and islands. Though a number of higher-end 3D design applications for landscape creation already existed, Bryce brought the price and user-friendliness down to a level that almost any home computer user can afford. An improved version called Bryce 2 came next.

Next came Bryce 3D, which added animation to Bryces already powerful feature set. This made it possible for home nonlinear editors to create dazzling 3D fly-throughs of their hand-crafted worlds at resolutions that looked sharp and impressive, even when output to DV tape.

Now, weve reached the fourth stage of Bryces development with Bryce 4. The enhancements in this release include more control over natural phenomena such as wind and rain, improved storyboard-style controls for animation, support for Adobe PhotoShop plug-ins and QuickTime VR movies and an innovative Internet collaboration tool called BryceTalk. Like the previous Bryce products, Bryce 4 is aimed at beginning 3D artists who want lots of power and functionality in an intuitive interface. It wont give you the raw professional power of Lightwave or 3D Studio Max, but it also wont require nearly the amount of time on the learning curve as most professional 3D animation packages.

The graphical user interface that Bryce employs is one that media professionals have raved about since its inception a few years back. In fact, its not uncommon to hear industry pundits refer to a new products "Bryce-like" user interface, if its slick and intuitive. For a complete discussion of the Bryce interface, we refer you to the Benchmark reviews of Bryce 2 and Bryce 3D (in the July 1997 and May 1999 issues of Videomaker, available on line at www.videomaker.com). For this review, well focus on some of the newer enhancements to the Bryce experience.

One place where veteran Bryce users will notice significant changes is in the Sky and Fog pull-down menu. There youll find SkyLab, Bryce 4s new and improved set of tools for creating an almost infinite range of different combinations of skies, atmospheres and celestial objects. You can position the sun and moon, select or edit your cloud textures and motion, add rainbows, set haze and fog thickness and more. You could easily spend days in this interface playing with the various options to create realistic (or alien) skies and atmospheres.

There are also some powerful enhancements to the animation controls in Bryce 4. The new Advanced Motion Lab provides a time-mapping curve similar to those found in high-end 3D animation packages like Lightwave and 3D Studio Max. The time-mapping curve allows users to fine-tune their animations with mathematical precision by charting the movements and velocities on a graph. Tools like this are extensively used to give artificial 3D moves a more realistic look; if a bouncing ball appears too fake or contrived, for example, you can remedy the situation by making adjustments to its motion curve in the Advanced Motion Lab.

One of the new Export options for Bryce 4 is QuickTime VR, a technology developed by Apple that provides realistic 3D point-of-view perspectives of a location. When you create a QuickTime VR movie of

your Bryce 4 landscape, you can actually get the feeling of standing in your artificial world and looking around at your creation. This aspect of Bryce 4 might be useful for game developers or simply as a novelty; it doesnt, however, have much to offer videographers.

What Bryce 4 does offer videographers is an excellent tool for creating stunning titles and full-motion, full-frame animations. Its a simple matter to create or import extruded 3D text into a Bryce 4 landscape and use the intuitive interface to animate everything, including the clouds in the sky, the sun and moon, fog, haze, etc. If you have a nonlinear editing system, and you want an easy and inexpensive way to create stunning animations for use in your videos, Bryce 4 might be just what youre after.

Many 3D artists spend long hours in front of a computer monitor, alone, drowning their sorrows with heaping piles of cheap junk food and ridiculous quantities of caffeine. Bryce 4’s BryceTalk aims to break 3D artists out of their self imposed cages by providing a ready-made Internet link between users of the software. It’s a pretty simple concept, really, just an Internet chat doorway that connects you to others who are currently using the software, so that lonely content-creators can get together and share ideas or troubleshoot problems. It’s another good idea that any number of software designers might want to think about emulating; if nothing else, it could lighten the load on their tech support staff.

Potential Bryce 4 users should be aware that for all the product’s innovative features and pretty buttons and windows, there are times when the power of the interface is a little overwhelming. The number of options available in the Materials Lab alone could lead the unwary into hours and hours of tweaking, polishing and re-configuring a single mountainside or cliff face. Still, for those who want a simpler approach, the pre-configured and randomized options available in Bryce 4 are enough to provide unlimited combinations of terrains, skies and atmospheres.

Hats off to MetaCreations for releasing yet another well-designed and innovative product in Bryce 4.