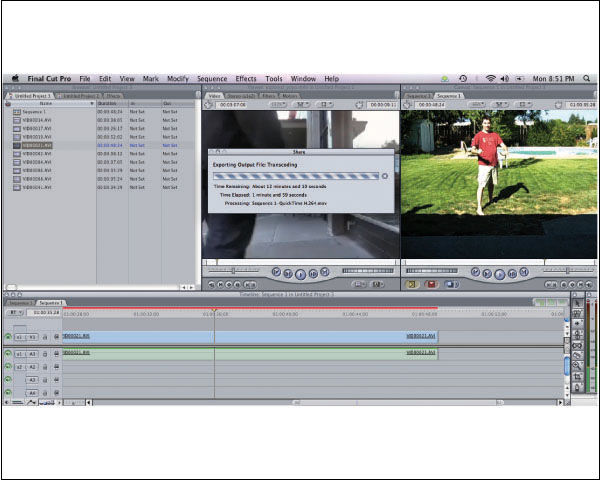 Final Cut Studio adds some notable enhancements to an already outstanding video editing suite. The latest update brings many thoughtful improvements for the high-end professional, while keeping the blue-collar editors and film students happy, too. 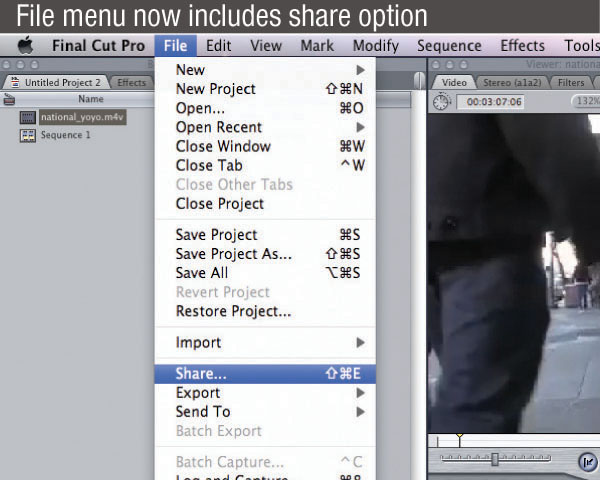 One of the more important features for almost any editor, but most likely the independent video producer who’s extremely busy, is the iChat Theater feature. For those unfamiliar with Mac computers, iChat is Apple’s instant messaging application for chatting with friends or co-workers online. Not too long ago, they added video conferencing to this program for business professionals. For Final Cut Pro, the developers took it one step further and added video editing collaboration support that allows Final Cut Pro 7 users to share their projects with clients or colleagues online. This is a rather significant step for a mainstream video editing application and one that we expect to garner a lot of appreciation from video producers.

iChat Theater is accessible from the View menu, where you can control the basic functions of the enhanced video conference. Final Cut Pro allows you to pause and start the audio and video and display the timecode, which is the bare necessities, but all that you may really need to collaborate with a client for review. The client will view the presentation through iChat or AIM and see your Program monitor and the timecode. It’s very simple to operate. First, you log into iChat, start your IM conversation with your client, then click on the Start Sharing option in Final Cut Pro. Then you can choose to pause or start the audio and video from Final Cut Pro, or turn the timecode on and off. The client will see you in small video tile next to the larger program monitor that plays your video and a timecode window as well.

We tried this out over a DSL connection with successful results. The trick is to make sure your client has a decent download speed and to also make sure that your upload speed is up to the task. While you’re pushing video through to the client, that effort is metered by your upload speed. It may be a good idea to test this out in advance with a client before the actual due date using a sample project. If the client’s Internet connection can’t cut the muster, you’ll need to get them into the studio.

Overall, this is one of our favorite features. Good online collaboration tools have been hard to come by, even with today’s more modern consumer video technologies. We hope to see Apple grow this tool even further with time.

The ProRes codec lowers the technical hurdle of editing high quality video, and this update includes three new ProRes codec quality settings. ProRes Proxy allows you edit highly compressed video files that are a fraction of the size of DV files. All the while, ProRes Proxy maintains the HD video resolution (i.e., 1920×1080 or 1280×720), despite looking fairly compressed. Even so, it was quite impressive, but definitely a “draft” quality. This is great for offline editing or working on limited workstations (e.g., laptops). We can see this being useful for video producers who run-and-gun (or run-and-edit, if you will.)

ProRes LT is a general purpose editing codec with a higher bit rate (at about 100Mbps) than the proxy, but still friendly on system resources. ProRes LT is more suited for long-form productions. This could be a great format for wedding videographers working in AVCHD giving you the expanded flexibility of ProRes in

Finally, we come to ProRes 444, a super high-quality codec for most high-end projects. If you’re shooting uncompressed video with cameras such as the Panasonic AG-HVX200, this may actually be of use to you. While most editors won’t need this cinema-quality codec, it’s nice to know that it’s there. 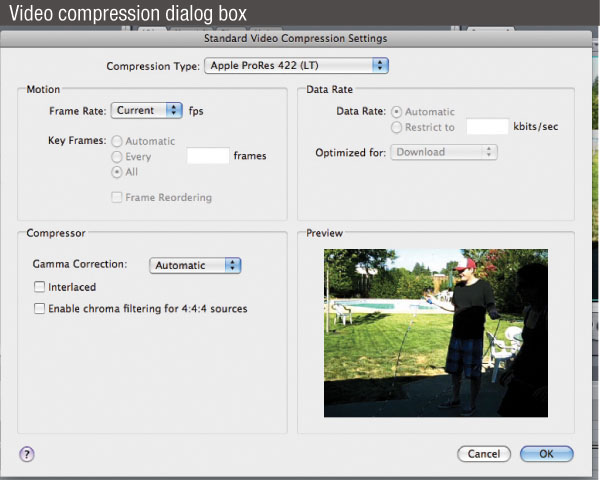 Final Cut Pro 7 added Easy Exporting within application allowing you to bypass compressor altogether. This is a great feature for many editors who don’t need the batch rendering or more sophisticated controls that you find in Compressor. Editors who simply need to get a DVD made or upload their video to YouTube can find these options (and many more) right in Final Cut Pro 7 by choosing the Share option under the File menu. These features reduce the amount of control you have over the export settings, however, the presets make it incredibly easy to a simple export.

When exporting to DVD, the Share feature rendered our project and prompted us with a “beep” that it was done. Out came an MPEG-2 encoded video file with a separate AC3 encoded audio file. Now we can take this to our favorite DVD authoring program for a quick burn.

The YouTube option also includes a “Publish” checkbox that allows you to enter your YouTube username and password and additional required fields (title, description, etc.) so that your video can be published immediately after it’s rendered. Typically, you’d see this feature in more consumer-level video editing applications, but clearly, the times have changed. YouTube is a common tool used by many editors.

Meanwhile, as Final Cut Pro 7 goes to work exporting your video from the Share tool, you can resume editing should you need to start working on the next video, say your Director’s cut or the blooper reel. You won’t have to wait while Final Cut Pro completes the process. This will free up your editing schedule, whereas you would typically schedule renders for the evening. What a slick feature this really is. 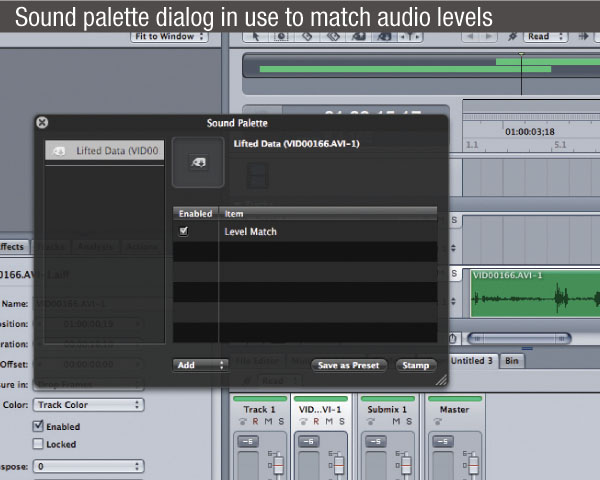 SoundTrack has added a clever feature that matches voice levels between two audio clips. This is a fantastic feature for video producers who want to match different audio tracks. Perhaps you’re cutting together two different interviews, or you’ve recorded multitrack dialog that needs to match. Well, it can be done in a matter of just a few clicks. The feature utilizes a “lift and stamp” technique, where one audio clip’s qualities are analyzed and copied (lifted) and the receiving audio clip is analyzed and adjusted (stamped) with matching audio qualities. This process is good for equalizing two different video clips as well.

We tested it out with two different audio tracks. Both were interviews using the same recording equipment, but the levels weren’t an exact match. SoundTrack made light work of the two files, and matched the volume levels accurately. No surprises here. We went back through carefully and couldn’t find any flaws with the process. Ultimately, this feature will be a huge time saver when working with lots and lots of dialog.

Staying On The Cutting Edge

With all these great enhancements, Final Cut Studio keeps in step with all the exciting developments in videography. It’s worth mentioning that native support has also been added for AVC-Intra codecs (found on many Panasonic cameras) and XDCAM 422. Additionally, you can work with RED files with software provided by RED. Just about anything you can throw at it has a workflow, which is great for professional editors.

Overall, we are really excited to see Apple make it easier for the average editor by introducing the “export shortcut” with Share feature in Final Cut Pro 7. And iChat Theater is one of the more promising new features that will allow editors to edit from anywhere and stay productive. This Final Cut Studio update offers thoughtful enhancements and a few new features well worth the sticker price, especially for those editors who will be upgrading. While not all applications received a lot of attention in this update, such as DVD Studio Pro, it goes without saying that “if it ain’t broke, don’t fix it.” We think this is a wise choice.

Final Cut Studio can play well with the average editor and the high-end professional, making it a great choice for just about anyone who wants to create great video presentations.