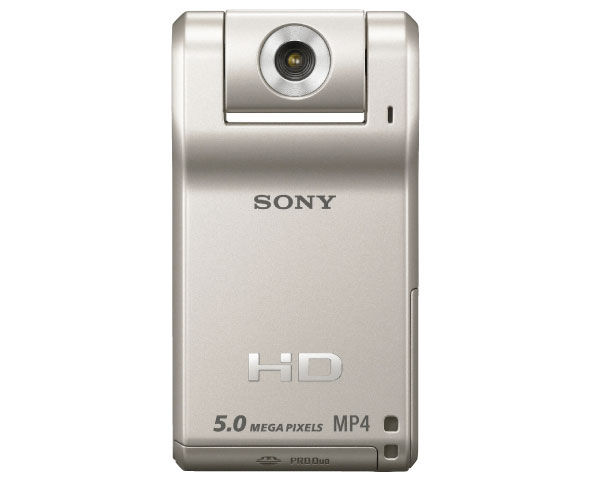 Sony’s MHS-PM1, marketed under their “Webbie HD” product lineup, is an interesting addition to the growing roster of pocket-sized video cameras designed for shooting HD video primarily for YouTube and personal use. With print and television journalism increasingly converging on the Web, like its competitors, the Flip Mino HD and the Creative Vado HD, Sony’s MHS-PM1 could also be a very useful camera for news gatherers who want to keep a compact camera around.

The MHS-PM1 has a very small amount of built-in memory (12 megabytes), but requires one of Sony’s proprietary Memory Stick Pro Duo cards to store anything beyond some still photos and a couple of minutes of video. So factor in the cost a Memory Stick (typically between $20 and $75 depending upon the brand and the amount of the card’s memory) to the cost of the camera.

The MHS-PM1’s simple interface makes getting started quick and easy. Rotating the protective cover on its tiny lens turns the camera on, and the buttons below the monitor screen marked PHOTO AND MOVIE are certainly intuitive enough.

But unfortunately, there are several aspects of the camera that are quirkier. Clicking once on the MOVIE button lights up a tiny replica of the typical video camera’s tally light (though aimed towards the operator, not the subject), to let the user know the camera’s recording. But then clicking that button again generates a note that says “RECORDING.” It’s the camera’s way of letting the user know it’s creating a file of the just-captured image, but it takes a couple of tries to figure out just when the unit is actually, you know, recording. A note like “WRITING” would have made a bit more sense.

Right out of the box, the MHS-PM1’s default mode is 720p, which is nicely compatible with the widescreen format that YouTube adopted in 2008. The unit shoots files in the H.264 MPEG-4 format, which can be uploaded to many video hosts without further editing. The MHS-PM1 is also capable of the larger 1080p, as well as a memory-saving SD VGA format.

The button on the right-hand side of the camera marked MENU brings up some commands, but the button to its right, which also doubles as the DELETE button for unwanted shots is what changes video modes. Again, this is awkward, and a better-designed interface aimed at beginners likely to be the bulk of the MHS-PM1’s marketplace would be a better idea.

As you can see by the video from the link above and shot in 720p, the picture quality, at least in well-lit conditions, is not bad at all for such a tiny camera. But perhaps the MHS-PM1’s most frustrating feature is the lack of a smooth zoom control. Most consumer camcorders provide fluid zooms, albeit usually created electronically. In contrast, the MHS-PM1 electronically ratchets between positions as it zooms; unless this is an effect you desire in your shots, you’ll want to compose your shot first, then hit record, or be prepared to discard the zoomed footage recorded. 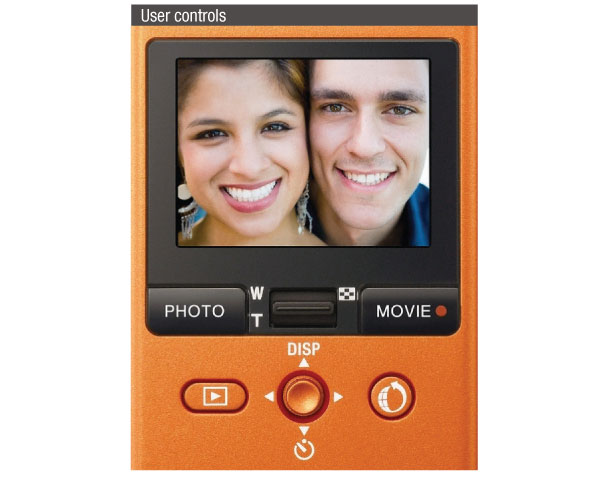 The MHS-PM1 ships with RCA cables that allow it to plug into TVs with composite or component inputs and a CD-ROM containing Sony’s (Windows-only) “Picture Motion Browser” software to archive images.

But for many users, the goal will be to export the footage into common editing programs such as Sony’s Vegas or Adobe’s Premiere. Files can be retrieved from the camera by plugging the unit’s Memory Stick into a compatible reader either built into the editor’s PC, or in a separate USB-equipped reader readily available at most consumer electronics stores. Also, footage can be retrieved via the USB cable packaged with the MHS-PM1, with a full-sized USB connector on one end, and the tiny connection that plugs into the camera. (Again, a slightly clunky feature, when compared with the integrated USB adapter built into several other comparable pocket cameras.)

Unlike some portable electronics, the MHS-PM1 won’t recharge via USB; its rechargeable lithium-ion battery is removable, which is both a feature and a bug of sorts. Charging the unit’s battery requires using the wall-wart AC adaptor included with the MHS-PM1, which the battery is first inserted into, then plugged into a standard electrical outlet. This works fine, but the whole procedure could have been streamlined by having a cable that plugs directly into the MHS-PM1, or perhaps a built-in battery and a recharging plug that folds back into the camera. On the other hand, the ability to quickly swap out batteries and memory cards means that many hours of raw footage can be recorded during a day’s shoot. The MHS-PM1 also has a DC-in jack, for use with Sony’s AC-LS5K AC adaptor, not included.

The unit features a self-timer and the video head rotates a full 180 degrees, so DIY video monologues are certainly doable, particularly with the built-in tripod mount. On the other hand, the MHS-PM1 lacks a separate microphone input, so you’ll be relying on the MHS-PM1’s built-in electret mic, which will make using the unit for interviews, particularly in noisy environments a bit frustrating.

But then, that’s the MHS-PM1 in a nutshell, isn’t it? Filling the gap between a cell phone camera and a decent pocket-sized consumer camcorder, the MHS-PM1 Webbie HD is great for quick and dirty video blogging, as a handy second camera for shooting B-roll footage, and certainly for home movies. But with a few additions and modifications, and some more thought given to its interface, it could have been a much more useful video tool.

Separate Level Controls for Each Channel: No

Other Digital Video Out: No

A solid addition to the growing line-up of pocket Web-oriented HD camcorders that could have been so much more.

Ed Driscoll is a freelance journalist covering video, home theater and the media.