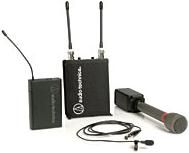 Perhaps one of the most important accessories a professional videographer can buy is a good wireless microphone system, the kind that will deliver clean, true sound with no interference or dropouts in a wide variety of environments.

For mission-critical applications that will not allow for long microphone cables–such as weddings, lectures, speeches and some live performances–the true diversity wireless microphone system, which uses two discrete receivers to eliminate interference noise and dropouts, is a necessity, not a luxury. Alas, such systems do not come cheaply; the list price of a true diversity transmitter and receiver alone can top that of many consumer camcorders, and that’s before you add in the cost of the microphone. To make matters worse, the best of these systems are also not very portable, sometimes occupying a full rack space and requiring their own Anvil case for safe transportation.

With the U100 series, Audio-Technica aims to deliver a true diversity system for videographers that is affordable as well as portable. Consisting of the ATW-R100 receiver and either the ATW-T101 body pack transmitter (for lapel mikes) or ATW-T102 plug-on transmitter (for handheld mikes), the U100 series is a rugged, affordable, and excellent-sounding option for professional videographers who want to take the next step up in audio options. For the purposes of our review, we tested the U100 system with two Audio-Technica mikes: the AT899cT5 condenser lapel mike, and the AT804 dynamic handheld mike. Unless stated otherwise, we will refer mainly to the body-pack, lapel-mike configuration, as this is the one that most videographers will be concerned with.

First looks at the U100 wireless microphone system reveal a receiver and transmitter that are built mostly of metal, not plastic, and that have professional-quality connectors and features, such as a full-size XLR connector on the receiver system, BNC connectors for the dual antennas, battery door hinges, etc. The heart of the U100 system, the ATW-R100 receiver, comes with a thick fabric case that allows you to wear the system on your belt if you prefer; the only other mounting method provided is a pair of hook-and-loop adhesive strips, which you can use to attach the receiver to a camera, tripod or other surface.

The front face of the ATW-R100 receiver has the aforementioned BNC connectors for the antennas, a headphone jack with level control, an output level control, a 3-position power switch (for internal or external power), and LED indicators for power, AF peak level, and A or B antenna status. Also located on the front face is a pair of dials for tuning in the desired UHF frequency for your area. The U100’s manual includes a very helpful discussion of which frequency might be best for you, based on whether or not certain UHF television channels are operating in your area. Another note about frequencies: the "x" versions of the U100 system–the ATW-R100x receiver, for example–are identical to other versions, except for the range of frequencies offered.

To test the U100 Wireless Microphone System, we first connected the ATW-R100 receiver to a Panasonic AG-DVX100A Mini DV camcorder, and cabled the wireless lavalier mike to the ATW-T101 body pack transmitter. Lacking a place to mount the receiver on the small camcorder, we hung the receiver pack on the camera operator’s belt loop, using a short (6-foot) XLR cable to connect the output to one of the camera’s mike inputs. The setup was a little awkward, but it did allow for quick adjustment to handheld shooting. The sound of the system was, in a word, excellent, and it was difficult to make it lose its signal. When it did lose its signal–from walking a good two blocks away from the camera–it did so in a very polite fashion, simply dropping the audio without a noticeable hiss or buzz. Next, we tried the ATW-T102 plug-on transmitter, and though we didn’t get as much range (about a full city block), we did observe the same high-quality signal and polite loss of signal. (A quick note about the plug-on transmitter: it’s not very attractive on camera, especially when you use a smaller microphone like the AT804.)

One of the aspects of the U100 system that makes it a joy to work with is the high quality of all its components, from the antenna connectors to the XLR plugs to the switches and knobs themselves. The attention to these small details, combined with the unit’s excellent sound, rugged construction and ease of use, makes the U100 Wireless Microphone System an excellent choice for video enthusiasts ready to take their audio to the next level.

An excellent, compact true diversity system at a reasonable price