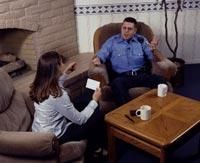 Though video is a visual medium, there are certain types of productions where what the viewer hears–not what the viewer sees–drives the video forward. Examples include the music video, the narrated documentary and the interview.

Of these, the video interview may be the simplest to produce. Simple is a relative term, however–turning out a crisp, articulate interview can be a challenging task even for the best videographers. Those who record a lot of interviews have developed a number of audio techniques and principles they rely on interview after interview. To help your interviews look and sound just like the pros, here are 10 proven techniques for taping and editing video interviews.

This means a mike held by interviewer or interviewee shouldn’t wave around like a baton. Nor should it drop from three inches below the mouth to 18 inches as someone’s arm tires. If you’re using a lavalier mike, make sure no clothing shifts to cover the mike. Likewise, don’t let the lav rotate to point sideways instead of directly up. If you have to put the interview on hold briefly to correct mike position, do so. The consistency of your audio is at stake.

A camcorder’s auto gain control (AGC) will compensate for level changes by turning the voice up or down, but you’ll hear a change in background noise as a result. This fact, coupled with the rising whoosh of background noise during pauses, makes AGC a poor choice for interviews. If you can set audio levels manually on your camcorder, do so. Manual record levels are important enough to justify recording to a high-quality VCR with this feature–simply plug your microphone and camcorder’s video output into the VCR.

During editing, you may need to make adjustments at each edit point to ensure consistent voice level. This is easy to do with a non-linear editor, especially one where you can simply adjust a volume line. This volume line also makes it easy to compensate for slow level changes over a long period of time.

In their zeal, some interviewers will fire off the next question the instant the interviewee is done answering the previous one. This is bad. Likewise, an eager interviewee may make editing more difficult by speaking hot on the heels of the interviewer.

Encourage your interviewers to hold their next question for a second or two after the interviewee stops speaking. Ask the interviewee to pause briefly before answering each question. Some interviewees feel that pauses in their speech sound unprofessional, and will try to fill every moment of their interview with something. Assure them that pauses are not only OK, but even beneficial to the process.

Set to tame just the loudest peaks, a compressor becomes what we call a limiter. Its effects are a little more transparent overall, as a limiter works only when your interviewee laughs loudly, coughs or delivers a few words with a little too much enthusiasm. With a limiter in the signal chain, these loud sections won’t force you to lower all your levels to avoid distortion.

The end of a sentence is the obvious place to edit, but you can also edit within sentences if your editing system is up to the task. Folks doing nonlinear editing enjoy the highest degree of precision, making editing interviews a much easier process. They have also the capability of doing a quick audio crossfade at each edit, which makes for a seamless audio track. Throw a cutaway shot over the edit, and nobody will even know the edit occurred.

If you’re editing mid-sentence to mid-sentence, you probably won’t have enough silence to create a seamless edit. This is where nonlinear editors can create their own natural-sounding pause, if they…

Record a few minutes of the room’s natural sound before or after the interview, and save it as an audio clip on your computer. Lay this sound on your timeline on the gap, and let it overlap the audio on either side. Then, do a quick crossfade (10 frames or so) to and from the natural sound and the result is a perfect, seamless pause.