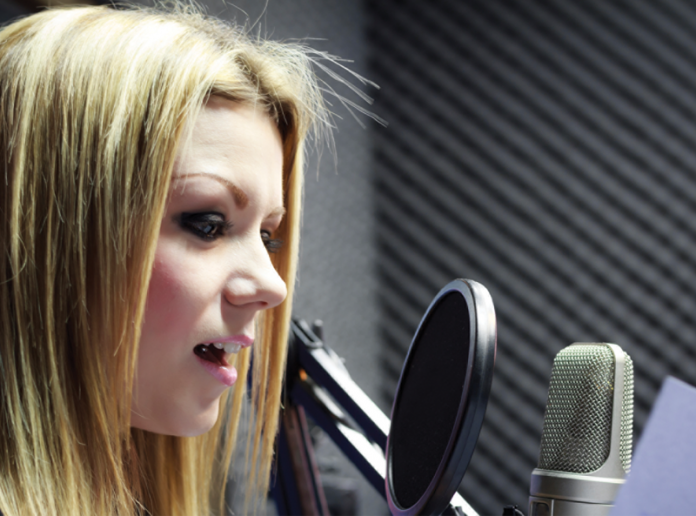 At some point in your video creation career, you’ll have to perform a voice over. Whether your regular narrator is sick or you have a very tight budget, recording your own voice over is a feasible but humbling task. To lighten your load, we’ve assembled our 10 favorite voice over tips. Some are very simple, some are somewhat technical, but all will save you time and frustration.

If you consume much mass media, you may have noticed the decline of “Mr. Announcer Voice.” You know the sound. They have a big, deep voice, enunciate everything perfectly and always talk down to you. By contrast, today’s average voice over is much more conversational and casual. Gender doesn’t seem to matter either. This is good for the first-time narrator since you don’t have to supercharge your voice to get a recording that sounds current. However, you do need to speak clearly and decide where your voice character fits in the narration spectrum. There’s a large gap between your typical public announcer and the guy who reads for monster truck rallies. [vm_ads:segment_break:2]

While your normal speaking voice may be fine in person, it loses a little something in a voice over. To compensate, you’ll have to crank things up just a bit. Finding the balance between natural speech and enunciation is a great place to start. Using a test recording or two, listen to your voice and make notes for any slurred phrases or indistinct words. They’re usually easy to correct with some practice. In addition, push your vocal inflection and emotion some too. It feels funny at first, but listen to the playback as you practice and you’ll hear the change. In general, if it seems a little over the top, it’s probably just right, in the context of your video. [vm_ads:segment_break:3]

It may seem obvious, but be sure to pre-read the material several times before you start recording. Reading through a script for a 30-second commercial is easy, but what if your project is a 20-minute training video filled with technical terms and chemical names? The time spent in preparation makes the final performance that much easier. This applies to both the script and the finished video. Knowing how things fit together in the final product will help with pacing. Don’t be afraid to add some emotion and excitement to the reading when necessary, stopping just short of your typical local used car commercial. And rehearse out loud. The script sounds different in your head. This will also identify any trouble words or phrases. [vm_ads:segment_break:4]

Obviously, you want to use the best possible equipment to record your voice over, but the definition of “best” is subjective. In reality, it’s easy to get a great recording with nothing more than a pocket recorder, windscreen and a pair of headphones. A more traditional approach includes a separate microphone, audio interface, computer and software. Alternatively, there are several USB microphones on the market at very competitive prices. Whichever path you choose, consider how you will use this equipment in the future and make sure it plays nicely with you and your production style. For those doing one-off narration, any mic and recording method you would use in the field works here too. [vm_ads:segment_break:5]

Consider recording your voice over standing up. Why? There are two very good reasons. First, standing opens your breathing and makes it easier to speak clearly and consistently. By removing the compression on your breathing muscles, you make it easier to take deeper breaths. In addition, a standing position allows you to be more animated. This is a good thing. In fact, get your whole body into the performance. Imagine you’re speaking to one specific person and let go. Point, nod, wave your arms, whatever it takes. Believe it or not, these motions impact your delivery and can be heard (in a good way) on the finished recording. [vm_ads:segment_break:6]

#6-Take Care of Yourself

Singers consider their voice an instrument and for good reason. All that coffee, alcohol, cigarettes and screaming at sporting events is like leaving a vintage Martin guitar sliding around in the trunk of your car. When you take it out to perform, it’s beat up and won’t function properly. Whether you do voice overs all the time or just this once, take care of yourself. A good night’s sleep and a liter or two of water every day is a great start. If you have allergies or other breathing issues, keep up with your medications, but avoid using anything that makes you too dry or too viscous before recording. A vocal warm-up before recording is a good idea too. There are several excellent examples on the Internet, but simply humming along with some music works too. [vm_ads:segment_break:7]

The cast of the original Star Wars trilogy had famously dogged George Lucas’ scripts saying that you can write this stuff, but you can’t say it. “You will never find a more wretched hive of scum and villainy,” says Obi-Wan Kenobi in a difficult-to read-aloud line as he and Luke Skywalker approach Mos Eisley. Would a Jedi talk this way?

Pre-read the material several times before you start recording. Add some emotion and excitement to the reading when necessary, and rehearse out loud. The script sounds different in your head.

Sometimes, even the best-written scripts are impossible to read aloud. It can be grammatically correct and technically accurate, but it might flow like peanut butter as you speak it. That’s why you should maintain some ability to edit the script as needed. Simplifying a script makes it clearer and easier to understand too. This benefits you, the client and the intended audience. When editing, though, it’s important to maintain the intent of the piece, so be sure to clear all changes with the original writer, first. [vm_ads:segment_break:8]

The nemesis of the voice-over artist is hesitation in the form of umm, ahh and uhh. Play your test recordings and listen for these gremlins. Food Network’s Alton Brown is the king of uhh, but his delivery is so conversational that it works for him. Odd that his Welch’s commercials are free of the phrase. Your voice overs should be hesitation free too. This is simply a function of practice and familiarity with the material. If all else fails, some crafty editing can eliminate these issues, but it’s always best to block them in the first place. [vm_ads:segment_break:9]

Voice overs are something of an artform but cold reads lack the “art” in the equation. One of the most common challenges is vocal inflection. First-time voice-over artists often end each sentence in a rising tone, almost like asking a question. It’s your challenge to overcome this tendency and end non-question sentences authoritatively in a falling or neutral tone. It’s harder than it sounds, but with some practice, you can leave a strong impression with. [image:magazine_article:34629]Don’t forget to include appropriate inflection throughout your voice overs, matching the content to the tone of your voice. And believe it or not, your audience can actually hear a smile. If the script is upbeat, record your voice overs with a smile to help push the message through. [vm_ads:segment_break:10]

Back in the old days, audible breathing during a recording was forbidden. The voice-over artist practiced taking silent breaths, working the microphone to hide the breaths and pacing sentence delivery to conceal them. Whether we’ve just gotten lazy or more realistic, audible breathing is more acceptable today. However, it still pays to work with the material to minimize the effect. A big, gasping breath in the middle of a sentence is still bad form but easy to eliminate. As you practice reading the script, mark places where you can safely take a breath, especially where you know there will be an edit or pause and rehearse breathing in those places. You can also turn your head away from the microphone briefly to minimize the sound. [vm_ads:segment_break:11]

Recording your first – or 10th voice over can be an intimidating exercise. Whether you consider yourself vocal talent or not, it’s often a necessity for small companies and one-person shops. Using these tips, your performance already has a head start. Who knows, you may be the next Don LaFontaine. [vm_ads:segment_break:12]

After your recording session, create a quick document to store information for the inevitable re-recording session. Include items such as microphone used, distance to mic, windscreen, recording room and even the time (your voice changes throughout the day). Include anything that makes it easier to replicate the performance if you have to do it again. Good editing can work wonders, but simplify the process whenever possible. Bonus Tip: If there are potential changes to the script, price, date, time, length of offer, etc. note those during your main tracking session. Then, when the client asks for variations, all you need is a quick edit. [vm_ads:segment_break:13]