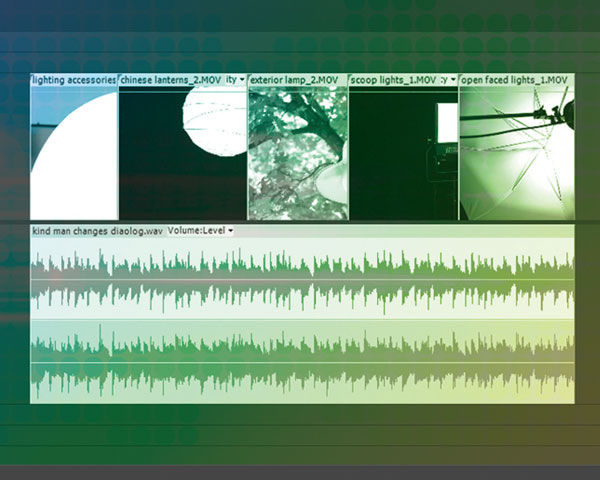 Grabbing a music track from your library or an Internet source is easy. Drag and drop it on the timeline, adjust the volume and – poof – perfect soundtrack. Well, maybe not perfect but functional. There are several ways to give your projects an extra kick, making them stand out against all the other muck on YouTube and in Corporate America. Using segues, bumps, sound effects and even self-created music, your audio production can rival that in recording studios. Of course, it helps to understand the fundamentals and applications, so here we go.

Segues have their roots in classical music. In general, it defines a smooth transition from one segment to another – or one song to another. In the dance club environment, you’d hear a segue as a crossfade between songs. In the hands of a professional disc jockey, the transition is seamless and you might not even notice when it happened.

In video production, a musical segue might occur when moving from one interview to another, from one location or scene to another or simply when one song runs out and you need to start another. To perform a segue in a video production, you’ll need two pieces of music, ideally with a separate track for each. Roughly place the second track toward the end of the first and zoom in to view the waveforms. You should clearly see where the first track ends and whether it fades out or ends abruptly. You’ll also see the beginning of the second track. The first thing to do is find a place to do a clean segue. This could include a number of factors like musical tempo, volume, pace and simply how each track sounds.

In a perfect world, both tracks would be a similar tempo, the same musical key and the feel of each track would compliment the other. Good luck with that. In the real world, clients sometimes pick the music, with no regard to how it fits the piece. In the real world, tempo and key never sync and you just have to make the best of it, one way or another. The simplest way to do this is with a crossfade. While some video editing programs allow a crossfade transition between audio tracks, others require you to do it manually, but that’s easy too. Every editor is a little different, but in Adobe Premiere Pro, click on the audio track to select it and move the playback head to the point where you want to start crossfading. If you look to the panel on the left, you’ll see a round dot, flanked by arrows. Click the dot to see a corresponding dot on the audio timeline. This is a keyframe marker. Move to the end of your crossfade and place another keyframe marker there. Once in place, you can grab the second marker and drag it to the bottom of the audio track. This reduces the volume to 0dB. You’ll also see a fade line connecting the two dots. This is your fade out. Do the same thing in reverse for the second track and you’ll have a crossfade. Duration of the crossfade or segue will be determined by the music and you’ll probably have to tweak it a couple of times to get it right.

This brings up another related topic called “backtiming.” Coming from the broadcast world, backtiming is simply setting up a music track so that it will end when the video ends, rather than fading the track out at the end. It’s simple to do in a video editor you can easily see when the video will end. Just slide the end of the music selection to the end of the visuals and you’re done. Of course, that doesn’t take care of the beginning of the music. There, you’ll probably have to do a segue, crossfade or a slow fade up using the techniques above.

Whether you call them bumpers, bumps, or buttons, it’s all the same. This is a piece of music or sound effect that gets you into a video segment. Often, these are signature pieces that help identify a character or even a specific section of your production. For example, in the Star Wars universe, each main character has his or her own motif. You can easily tell when Princess Leia or Darth Vader is the central character of the scene. Another example is talk radio or television news. Whether going into the program or out to commercial, you hear bumper music and themed music for special segments. In each case, the bumper music is short and simply serves as a transition into or out of the main program.

But you don’t have to use music. A signature sound effect would also do the trick, like the class bell used to bump from scene to scene in the television show Glee. Whatever path you take, bumpers are easy to insert. While you might have to do a simple fade-in or fade-out, for the most part, you just place the clip on an audio track at the transition point and that’s it.

Buyout music libraries are full of musical transition elements and there are several Internet sources today as well, but why not make your own? Using inexpensive – or even free – software and a little creativity, you can produce unique segues and bumpers for your projects. Your video gets something made specifically for it and you don’t have to worry about copyright.

There used to be a time when you had to rent a recording studio, hire musicians and pay through the nose to create original music for a production. Now, we all have audio production studios inside our computers. And these aren’t just for recording audio, they’re full-blown music creation workstations. Products like ACID Music Studio, GarageBand, FL Studio and Sonicfire Pro transform music production by using short audio loops to build complete compositions. In addition, many of the major audio editing platforms now support multi-tracking with audio loops.

To begin, you’ll need some software and some loops. Fortunately, that’s the easy part. For Mac users, you may already have GarageBand on your computer. If not, the current version costs $5 and it has everything you need. For Windows, a free version of ACID Xpress is available at www.acidplanet.com. While you’re there, make sure you download an 8pack, a pre-built song with all the loops included. You can also buy loop libraries just like buyout music when you need more variety.

To get started with loop production, try building a simple pop or rock-type song. Find a drum beat you like and put it on the first track, dragging it out for maybe eight repetitions. Next, find a bass sound – either guitar or synthesizer – that sounds good and put it on the second track, dragging the length to match your drums. For some instant gratification, push the play button to hear the music so far. You probably have a good, simple groove going by now, so experiment by adding more instruments on additional tracks. To create some variety, try leaving various elements out every two, four or eight repetitions, replacing them with others or simply leaving the hole.

Creating music with loop production software is a little addictive. Once you start, it’s hard to stop. That’s a bonus for your video creations since they can now have unique audio tracks made to fit. Plus, you’ll have fun doing it. Just try anything and everything, whether it’s “right” or not. You can always undo or even start over. Along the way, you’ll find something worth exploring, saving and using in your next video project.

With a few simple tricks and techniques, these audio elements can transform your video productions from everyday to extraordinary. Don’t be afraid to try creating your own music, either. No music theory required to get started and results happen fast. Of course, if you have a musical background, you’ll create even more complex arrangements just as quickly. Either way, leveraging the power of these musical pieces puts you a step ahead of the pack.

For whatever reason, you may want to edit an existing song from your music library. It helps to break the song into components first. A typical pop, rock or country song has verses, choruses and a bridge. Verses are the part that tell the story of the song, choruses are usually repeated after verses. The bridge typically sounds completely different than the rest of the song and serves as a sort of musical break in the middle. By setting edit points at these natural divisions, it’s much easier to trim and arrange the music. Fair warning: copyright law still applies and social sites like YouTube and Facebook are cracking down on copyrighted material uploaded to their sites. So don’t be surprised if your fancy new edit gets removed if you post it online unless you play fair.