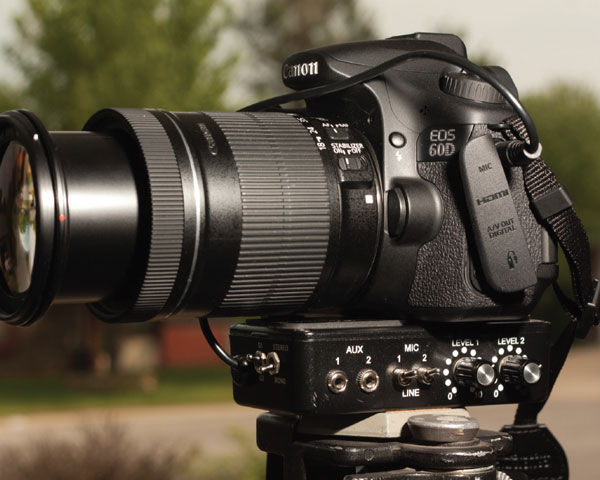 Have you joined the revolution? Many video shooters have switched from traditional camcorders to DSLR still cameras. The reasons are pretty simple. For around $1000, you get a fully functional high definition video camera, interchangeable lens options and super shallow depth of field for a very cinematic look. Plus, as a bonus, DSLRs take pretty nice still photos, too. But one of the biggest downsides is capturing audio. DSLRs are designed for photographers, not videographers, so the audio features leave something to be desired. Of course, if you want the visual quality, it's worth looking for audio options and there are several out there.

We'd all love a couple of nice, secure XLR audio inputs on our camera, and they're available on many models of camcorders – just not on the new DSLRs. It's a question of real estate. There's just no room on the body of a standard still camera for bulky professional audio connectors. In addition, the manufacturers are just now embracing the market-changing impact of this new breed of hybrid camera. In the past, if video capabilities were included in a still-shooting camera, they were just a novelty. Today, video recording is a major feature and many people buy a new camera for that reason alone.

So, how do you handle DSLR audio? The answer may depend on the camera. First, you need some sort of audio input. As with small camcorders in the past, there's usually only room for one kind of audio connector; the ubiquitous (and infamous) 1/8-inch mini-jack. This is the same size connector found on your MP3 player, laptop computer and many other consumer devices. It works fine in most cases but lacks several key features of professional connectors – specifically, balanced audio, phantom power and durability. It doesn't look like that will change any time soon, so we'll just have to deal with it and move forward.

The other question we have to answer is what happens to the audio once we plug it into the camera? If you're simply attaching a microphone, that's the ideal setup. Most HDSLRs handle microphone signals just fine. But what if you want to hook up a line level source? Here, you'll have to go menu-diving and look for a signal pad or some other adjustment to compensate for the higher signal level. If you don't find one, it may be time to rethink your audio input strategy.

Finally, there is the issue of Automatic Gain Control or AGC. We've discussed the disadvantages of AGC in camcorders before and this is no different. Automatic Gain Control monitors the incoming audio level and raises the gain for soft sounds while lowering gain for loud sounds. The end result is an inconsistent recording level that can be difficult to manage in post. Ideally, you want manual audio level control and many of the newer HDSLR cameras have it. Adjustments are usually hidden in the audio section of the video setup menu.

So you've found the audio input, navigated the menus and understand how to record audio on your HDSLR. But what if you have a balanced, professional microphone? How does that attach to one of these cameras? With an adapter, of course. BeachTek, juicedLink and Studio 1 Productions are all players in this field. Their adapters start around $100 and go up beyond $400, adding convenience and features along the way. At the bottom of the scale is a basic connector adapter that simply changes an XLR connector into a 1/8-inch plug. You'll find different versions of this adapter selling from $10-50. You can even build one out of available parts, but it gives you only one, unbalanced input connection with no other options. This is perfect for run-and-gun situations and simple setups, but not much else.

We'll call the next step up purpose-built passive audio adapters. This is generally a small box that mounts easily to the tripod thread on the bottom of your camera. Microphones and other devices plug into the box and it adapts everything to a single 1/8-inch audio connector for the camera. Most include two inputs with volume controls, mic/line switching, a mono switch and a ground switch to minimize audio hum. These are a great solution for many shooters with prices ranging from roughly $150-$200. There are usually no batteries required, but they also lack phantom power.

Finally, there are powered adapters starting around $300. These adapters have all the bells and whistles – phantom power, microphone preamps, headphone jacks and more. For the extra money, you get clean, controllable sound and an array of options for just about any shoot situation. Some specialized adapters include up to four microphone inputs. A few even offer a unique feature to defeat the AGC in your camera with some audio trickery. If you shoot for a living or have very specific needs, look at the higher end adapters. They deliver a lot of bang for the buck.

Not allHDSLRs include a microphone jack. This was (and still is) a common problem in the camcorder world. The hybrid video/still cameras have the same issues. If your camera lacks an input jack, check out the broad selection of high quality portable audio recorders. Names like Sony, TASCAM and Zoom dominate the field with products starting at about $100, going up to around $400. Most of them share similar features: built-in microphones, mic and headphone jack and auto and manual audio levels with recording to small flash memory cards. Some have specialty features like XLR audio inputs, four-channel recording and even surround recording. Some are barely the size of a cell phone while others are a bit chunkier.

Recording on a separate device is great for audio quality, but challenging in post. Now you have to sync audio and video files inside your editing software. If you like, you can go old school and use a clapper board during the shoot. As long as the camera can see the clapper and the microphone can hear it, you're set. Alternatively, there are apps for the iPad that serve as virtual clappers, including a lot of information that could be helpful down the road. Whatever method you use, syncing works the same. Cue the video to the exact frame where the clapper snapped shut. Locate the spike in the recorded audio waveform and line it up with the video frame. Tie the two together and you're set. Of course, you have to do this for every clip, and that can be tedious. For an automated solution, check out the PluralEyes plug-in. This bit of software analyzes the audio recorded on the camera and syncs it automatically with the separately recorded audio. The newest versions of Premiere Pro and Final Cut include a similar feature if there's an upgrade in your future.

Most video shooters today have at least considered switching to DSLRs as their primary camera. The learning curve can be steep, especially if you're not familiar with the settings and terminology of a still camera. If you're making the transition, don't forget the audio. It takes some extra gear and planning to get it right, but it's worth the effort. It would be a shame to have all those awesome images married to a nasty soundtrack.

Using a DSLR for video requires a mind shift in your workflow. It's easy to get caught up in all the new lenses, settings and menus. Just don't forget all of the audio basics we've taught you – they haven't changed much over the years.