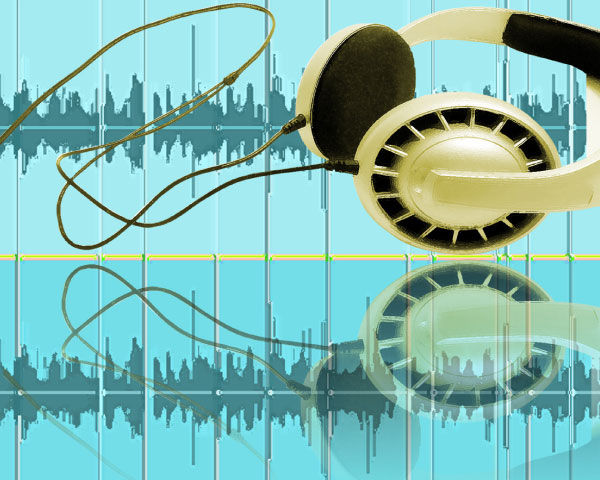 You could just plop effects dead center in the mix, but what fun is that? Your video and audio editing software packages have tools to spread the sound around, placing it in convincing locations across the soundstage. Some tools are simple, while others require some practice and patience, but in the end, your projects will sound better. This translates into happy clients, more work and another nice piece for your demo reel. 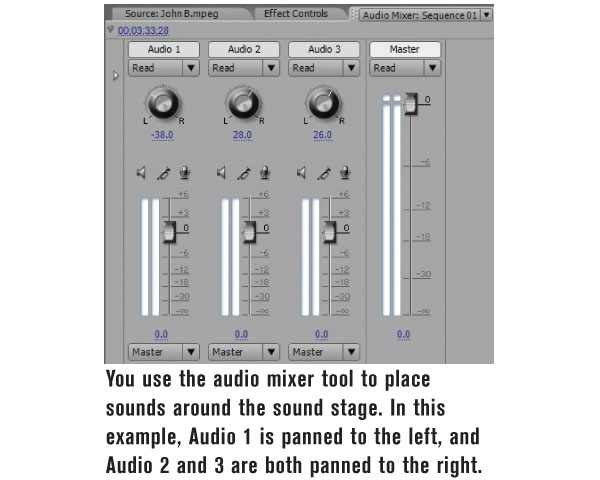 It’s true that surround sound is where everything is headed. But until everyone plays video on surround-equipped systems, there is still a place for a nice stereo mix. Creating that mix requires several elements: voice, music and sound effects. For a good example, find your favorite television drama and play an episode on a system with a headphone jack. Plug in the headphones, sit back and listen closely. In most productions, the dialog is placed firmly in the center – with a few exceptions. This anchors the actors’ vocals and draws your attention to what’s being said. Music is spread across the soundstage, just like any stereo music you listen to on your car stereo or MP3 player. Instruments live in specific locations and larger items – like drums or keyboards – fill the entire sonic image, almost like you’re sitting in front of them. Sound effects are where the fun happens. Helicopters fly across the screen, bullets whiz back and forth in a firefight and people walk from here to there, seamlessly. Or is it?

You see, in most television dramas and motion pictures, the sound you hear is almost all constructed in post production. In fact, it’s likely that very little of what you hear was actually recorded during the shoot. Actors often replace much of their dialog in the studio, and sound effects libraries stand in for the real thing. Why? Simply because it’s easier to control. In the real world of production, a fully “natural” soundtrack requires microphones on everyone and everything, with some poor soul tucked in a corner mixing everything as it happens. If you think about it, that’s not really very natural after all. So, rather than go to all that trouble, producers replace and enhance sounds in post. But that’s where the fun starts.

If you start thinking like a movie producer, you can use these same techniques in your productions. We’ll discuss some of the other elements in future issues, but for now, let’s concentrate on the stereo mix. Every stereo mixer – whether hardware or software – has a dedicated knob or slider for stereo placement, called the pan control. The pan control affects only the left/right placement of your sounds and doesn’t mess with volume. In a typical NLE, simply drop your sound effect on a track and move the pan control to put the sound where you want it. This works great for one-shot sounds like slamming car doors, telephone rings and crying babies. Listen to the stereo mix and adjust the timing, volume and pan for the most realistic sound. For the next effect, drop it on another track and repeat the process. This eats up a lot of tracks, but you have complete control over each item. Plus, you can mute, solo and export individual tracks should you choose to create a surround mix in the future.

This form of stereo mixing is fairly straightforward. Of course, scores of professional audio mixers have spent entire careers perfecting their art, so don’t get frustrated if your first efforts need a do-over. Mixing stereo tracks takes practice and repetition, so use this technique as often as possible. Each time will get easier, and your results will come quicker. Monitor the mix with speakers and headphones and, unless that’s your goal, keep the drastic adjustments to a minimum.

Keyframes Are Your Friend 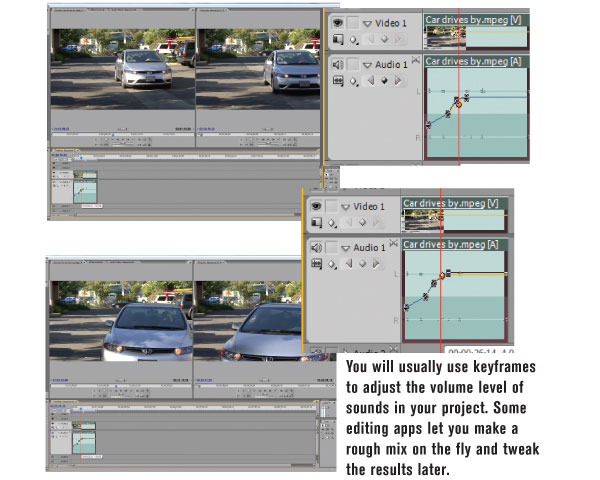 Not all sound effects are one-shots. Some need time to develop on screen. For example, a car approaches, then drives past the camera. In stereo, this means your sound effect needs to start primarily in one channel and move to the other channel over time – matching the movement on the screen. For this, you need keyframes. In video terms, keyframes are simply markers you set on a clip, identifying certain events over the length of the clip.

Every NLE and DAW does this differently, and you’ll have to get familiar with your software. Fortunately, most applications have similar approaches. Premiere Pro has a couple of unique ways to control the pan of sounds in your project. First, enable Show Keyframes for the audio track you want to control, and then tell the track to display the Track Panner. Move the timeline cursor to the first point you want to change, and set a keyframe there. Set more keyframes throughout the track as needed. Now you can slide the keyframe marker up or down on the track to create a channel pan to the left or right. If you right-click on the marker, you will see options for the type of transition. Linear transitions are straight moves from one position to the next. Bezier transitions provide a softer curve and create a flow to the pan. Listen to the results, and tweak your keyframes until you’re happy with the results.

Another panning method is called automation. For this technique, the first step is to write-enable the audio track in the mixer. Next, play the track and move the pan knob or slider as the clip plays. The software records your movements and duplicates them on playback. Depending on how many moves you made during recording, there may be hundreds of keyframe markers on the timeline. Each is adjustable, if you need to change things. There is even a touch-up mode that allows you to correct pan automation after the first pass.

All audio editors should be familiar with stereo panning. It is a fast, simple way to create space in your projects, allowing the audio to breathe and draw the viewer into the production. It makes your sound effects more realistic and adds a professional touch to any project. Once you’ve mastered stereo panning in the stereo space, the next logical step is surround panning. But that’s a topic for another day.

There are three ubiquitous sound effects I guarantee you’ve hear in your lifetime: The Wilhelm Scream, Castle Thunder and Universal Phone. Each of these sound effects was created years ago and somehow became a part of sound-mixing culture. Audio editors have used each of these sounds in hundreds of movies, television shows and video games. For more information, look them up on Wikipedia. The moral of the story is twofold. First, don’t be afraid to leverage a sound effects library in your productions. Second, if you record your own sound effects, save them for later use. Who knows, it could turn out to be the next Wilhelm Scream.