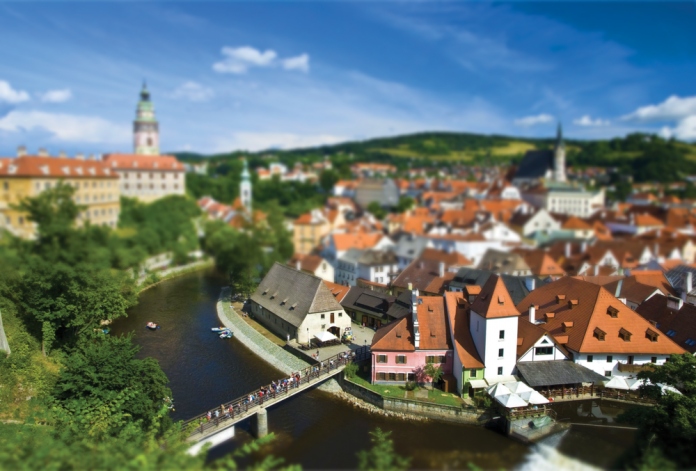 Visual aesthetics ride the roller coaster journey of trends. Currently the process of making video look like miniature toys is a popular look, and why not? Called tilt-shift photography, this stylized look takes real world footage and turns it into a visual toy box. Expansive landscapes and steel behemoths are rendered to tabletop playthings; a world in the palm of your hand. Video builds on this photographic illusion, changing real-time motion into a false staccato of stop motion animation. The popularity of the tilt-shift look is in part due to the accessibility of 35mm lenses, the ability of DSLR cameras to shoot video and the software capabilities of editors to simulate the look in post-production. This article is about the latter: how to create the tilt-shift look in post. It’s a process that can be done in most editing software and visual effects packages. With a little bit of effort, the virtual effect can be hard to discern from the practical tilt-shift image.

The best way to get a feel for the miniaturized toy look of tilt-shift is to watch some great examples. Fortunately, the video sharing sites of the Internet are home to the best examples there are. Here are some particularly well-known short films utilizing this technique.

• One of the most critically acclaimed is the short film “The Sandpit.” It gives a day in the life of New York City and is visually breathtaking.

• A classic miniature is the toy soldier. They continue to entertain generation after generation. The tilt-shift look is on full display in Toy Soldiers.

• There is no place on Earth as magical as Disney’s Magic Kingdom. For decades, their engineers and artists have wowed audiences with model making and incredible attention to detail. In A Model Day at Magic Kingdom you’d think they built it all with their skilled hands. This time, it’s the real thing.

• A display of the finest miniaturized-toy-look short films wouldn’t be complete without some cars rolling around a dirt track and crashing into each other. Add in a robotic dragon and you have a great toy box with Metal Heart.