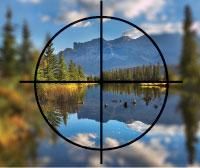 Many editing software programs offer a variety of colorful scopes to help enhance the hue, color, and brilliance, among other editing tweaks. But how do they work?

I recently took a documentary I was editing on a 24″ iMac and brought it to a Mac Pro tower with dual 17″ NEC monitors and – holy hue! – the colors were completely different. The iMac was much more vibrant, but were those the true colors or just a slick Apple monitor? How do we know what true colors really look like?

Truth Lives in the Videoscopes

The videoscopes in higher-end video editing software programs such as Final Cut Pro, Premiere Pro or Avid systems are very similar to their physical hardware cousins in online or color-correction facilities. They provide exact measurements of color, including its hue, saturation and luma levels (explanations below). When we deal with these scopes in post production, we are using them to help us match shots, to correct individual shots, to make our overall videos more consistent or for special effects. We can use scopes on set to adjust the image the camera is capturing, which, of course, would make our job as editors easier, or even while capturing, though this is not always economical in our no-budget world. So most of the time we’re forced to “fix it in post.”

Today we will be talking about four scopes: the Waveform Monitor, the Vectorscope, the Histogram and the RGB Parade. But first, a quick primer on what exactly we are measuring.

It would be a wonderful world if we measured our colors in video editing only in the RGB mode. In this system, all the colors we perceive are some combination of red, green and blue. In the RGB mode, all three colors contribute to the perception of brightness as well. But this simple mode became a problem in the early 1950s, when engineers were trying to figure out a way to switch from black-and-white televisions to color, while still leaving the b/w sets relevant.

To make a long, technical explanation simple: television engineers developed a way to make a solo luminance channel. This regulated the light intensity as seen by humans, which existing b/w televisions could decode. Color sets received the same luma channel but also received two additional color channels that could be decoded back into RGB color. Humans are more sensitive to luminance than to color fidelity, so the engineers developed a system that reduces color information in the compression of images, limiting the amount of data needed to reconstruct an image.

The first part of our image consists of light or luminance or luma. This is the brightness of the video, from absolute black to the brightest white, including all shades of gray in between. We can measure luma in different ways (8-bit RGB data is typically measured from 0 to 255), but some editing systems measure it with 0 equaling absolute black and 100 being absolute white. Many editing programs and cameras will surpass absolute white into super-white. It is important to know that, even though your camera may record luma levels into super-white and your editing software can deal with that, they are not broadcast-safe.

Chroma is color and consists of two parts: hue and saturation. Hue is the color itself – red, green or blue, for example. Saturation, as its name implies, refers to the intensity of the color, such as dark blue or a faded, light blue.

The waveform monitor shows the relative levels of brightness and saturation in your footage, reading from left to right. Zero percent at the bottom is absolute black, and 100 percent at the top is absolute white. Remember that many Mini DV cameras can shoot over that 100 percent white level, which is fine for the internet but not for broadcast TV.

The waveform monitor shows the specific grayscale value of each pixel in the image, from left to right. So, if you have a black background on the left of the screen, all the pixels in that vicinity will be in the lower part of the monitor on the left. If a bright white object takes up a majority of the right side of the image, the majority of the pixels on the right of the waveform monitor will be toward the top of the monitor at the right.

This monitor shows only specific grayscale value for each pixel in the image. You cannot use the scope to identify specific features, as the waveform has no concept of a pixel being in a particular spot in an image.

The vectorscope looks like one of those World War II radar monitors with a crosshatch and circles radiating from the center. This monitor gives us information on color saturation and hue. It looks like a standard color wheel, with six squares called targets indicating the primary colors of red, green and blue and the secondary colors of yellow, cyan and magenta. The distance from the center of the circle towards the box represents saturation. When a color projects past its target box, it is oversaturated for television. Use a color correction filter or the broadcast-safe filter to bring color back into safe range.

The waveform monitor and the vectorscope are the main two video scopes, but there are two more that could be of assistance.

The first is the histogram, which shows you the relative strength of the luminance value in your image, from 0% or absolute black on the left to 109% or super-white on the right. The height of your peaks, valleys and spikes tells you the number of pixels at that luminance value.

This tool is good for checking exposure levels or comparing the contrast of two images. A low-contrast clip will have a big gathering of pixels in the center of the graph (bell curve shape), far from extreme white or black, whereas a high-contrast clip with be evenly distributed with possible spikes on the far right or left.

The parade scope is similar to the waveform monitor, in that it shows us the saturation of the image, but this scope separates the red, green and blue elements, putting them one right after the other in a “parade.”

You can isolate and adjust individual primary colors. You can also use this scope to compare and contrast the colors of two different clips adjacent to each other. If you shoot an insert or B roll in a different location, you may try to match the RGB levels a bit to make them more compatible.

This is a quick jog through four very important tools for the intermediate or advanced editor: waveform monitor, vectorscope, histogram and RGB parade scope.

Don’t expect that you know everything there is to know about these scopes from these few paragraphs. To expand your knowledge, find the scopes in your editing system, begin to notice how they work and further research their uses. There are many good, free online tutorials on how to use the scopes specifically for your editing software. Many of these tutorials will also show you how to use effects – such as color correctors, proc amps and more – along with the scopes.