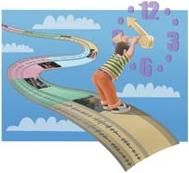 As video producers, it’s our job to make time fly. Or crawl. Or hop, skip, or jump. Given the tools any modern editing software has today, we can pretty much make time do our bidding. Yes, every time we sit down to edit, we are time pilots. We can slice and dice time. We can take a scene that originally occurred in "real time" and slow it down to make it easier for our audience to examine the passing scene in detail. Or we can choose to accelerate time, compressing long seconds, minutes, or even hours into a shorthand stream of imagery. So given this power, how do you decide whether or not it’s a good idea to mess with nature’s "real time" standard? Tough question.

Typically, shooting a minute of footage takes a minute to play out on screen. It’s a natural pace that reflects what we expect to see in the real world. But back in the edit suite, time is (quite literally) what you make it. In fact, the very basic idea of editing starts out as just a form of compressing time. When we cut from one scene to the next, we’re removing the time it took to move from location to location, angle to angle and we’re compressing the scene into visual shorthand. Hopefully, a scene that keeps our audience engaged by deleting material that is not pertinent to the story we’re telling.

So the basic tool of time compression in video production is the cut. In fact, in nearly every movie you watch the only transition employed is the cut. And where and how you cut really matters. Watch well edited material and spend some time analyzing the cuts and you’ll find that there’s a language of the cut. Particularly in narrative video storytelling. You can lose your audience if you make a cut that jars the audience out of your story.

In video production terms this is sometimes referred to as a "jump cut" which is two similar shots cut together with a jump in continuity, camera position or time. It’s jarring because it messes around with our expectations of time.

If a character raises his arm in one shot, and you cut to a second shot where his arm isn’t raised, we say there’s no "continuity" which is a fancy term for maintaining visual flow so that the audience sees a proper progression of time between actions. But since the goal of a lot of editing is to shorten time, how do we accomplish this? Trickery, of course.

One technique is to cover our jump cuts with "b-roll" scenes that distract the audience from the discontinuity. This is why good "coverage" or shooting extra scenes that can be used as cutaways is so important. Cutaway shots mask jumps in time.

But sometimes, changing time is really about changing time. Making your scenes faster or slower than they naturally occurred. And there are some great new tools built into our editing programs that make this a lot more convenient than it ever was before.

A couple of generations of software ago, the cool new capability was "time remapping." With this process, the user doesn’t specify a single percentage of "faster" or "slower" for an entire clip, but takes the speed change capability to ramp up or ramp down speed changes via keyframes. With this new development, we saw a sudden rash of television commercials hit the air with moving scenes that began with one speed, then smoothly accelerated and decelerated all in a single effect.

It’s a cool visual. And today, many editing software programs come with this effect. (check your manual under "time remapping" or a similar term to see if your program can do this.) Again, the advantage is that you control the rate your scenes play out to your audience.

Let’s say you’re making a "tour of our school" video. At the end of the "here’s the cafeteria" sequence, you plan to change scenes to the "here’s the band room" sequence. Instead of shooting the cafeteria sequence, then turning off the camera and walking over to the band room to shoot that next sequence, just let your camera roll as you follow your subjects walking from one location to the other. Using time remapping, you can accelerate the footage of the "walk" so that the audience goes along on the trip between the buildings in hyper-speed! This gives the audience a better sense of the physical layout of the school while still avoiding the boredom of a long, slow walking shot.

"Slow-mo," or "slow motion," is a powerful technique used to help your audience "get" a scene where the action happens too quickly for the brain to process.

A great example is the Matrix movies’ "bullet time" effect to focus audience attention on the main character’s supernatural abilities. That type of visual time remapping was revolutionary when it hit the theaters some years ago. Today, most edit systems can slow time down with a few clicks. However, it’s important to realize that not all "slow motion" effects are created equally.

Most stock editing software simply change the rate at which the frames display to achieve slow and fast motion effects. So changing speed in even increments– frames halved, doubled, tripled, etc. is pretty easy for any edit software. But what if you need something other than this type of mathematically simple time manipulating? What if you want to slow your scene down by 40%? Clearly, the math necessary to divide those frames down is much more complex.

That’s where the computer wizards have had to step up and create mathematical models to do something complex called "interpolation." Interpolation is the process of analyzing the motion data in the video frames on your tape, and not only displaying them at varying frame rates, but actually "faking" data that didn’t exist on the original tape in a way that fools the viewers eye into believing that the slow or fast motion on screen is both smooth and realistic.

Good interpolation algorithms are at the heart of getting really good results in re-mapping time for fast or slow motion effects. So if you want good results, make sure your software has the power to interpolate time.

Like every other video and editing effect, time remapping is at it’s most powerful when it’s used to mean something other than just "look at this — this looks cool." In the Matrix it reveals character. The "bullet time" sequences help us visualize things that in real time would be a blur — and in our "school tour" example, time remapping lets us keep the pace of our video interesting while still letting the audience see the campus — a core goal of the video.

So dig out your manuals, and learn about how your software can turn you from "video editor" into "time pilot" with a few clicks. You might be surprised at all the great places you can show your audience once you learn to how to fly! Bye now, I’ve run out of time.

Bill Davis writes, shoots, edits, and does voiceover work for a variety of corporate and industrial clients

We often think of time manipulation as reducing time, such as in our school tour when we moved from the cafeteria to the band room. All that video in between the two locations would have been boring to watch at real time, and would have wasted time needed for other more compelling shots. So we simply deleted the walk, or in this example, we sped it up to make it more interesting. But what if we want to drag a scene out that takes only milliseconds to actually occur. Ah! There’s the rub!

The 1984 movie The Natural, starring Robert Redford, is full of classic examples of expanding time. How long does it take a baseball pitcher to throw a pitch to the batter? At 80-miles-per-hour, about 1/3 of a second. How can you expand this shot to add more drama to the scene? Time Manipulation. In the movie, we see Redford getting ready for his wind-up pitch. We then see a wide shot of the pitcher’s mound as he analyzes the situation. We cut to a reverse shot of the batter, catcher and umpire. Cut to a closeup of the catcher giving a secret signal to Redford. Cut back to a closeup Redford’s face as he nods to the catcher. Cut to a wide shot of the breathless spectators in the stands. Cut to a close up of the small boy watching his hero. Cut back to the pitcher as he raises his leg for the windup. Cut back to a close up of the batter as he kicks the dirt at home plate. Get the picture? This entire sequence plays out to be about a minute or longer before Redford actually throws that lightening fast pitch. We editors are the masters of time manipulation!

[Sidebar: The Nature of Time]

As someone once said to me, "a second spent with your hand over an open flame is different than a second spent kissing someone you love." One you can’t wait to get past, the other you might wish would linger forever. This speaks to our very perceptions of time – which are unique and individual. That long shot of Sally sewing shorts might delight the local sewing club, but bore me to distraction.

The point is that time is relative. So before you start speeding everything in your videos up to warp speed because you think they’re dragging, remember — you’ve probably seen every frame of your video a hundred times during editing. For the audience — this is probably the very first time.