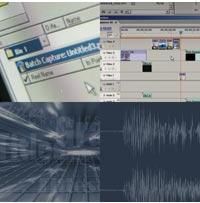 Last month, we covered the preliminary planning you need to do before you begin your video project. And we outlined a typical workflow for logging and capturing the clips that will form the building blocks of our family history video. This month, we move on to building our timeline, ordering and trimming our individual clips and then previewing the results to check the pacing for our program.

Unlike narrative work such as a play or narrative movie, the kind of family history highlights video we’re planning doesn’t come with a predefined story arc. Therefore, we’ll need to establish our goals for ordering our clips in some kind of sensible flow. For our program, we’ll lay our clips on the timeline in a rough chronological order, with the oldest photos and clips first.

Many editors are set up to insert batches of files onto the timeline in the order of their names. This is a powerful function since you can roughly pre-order your clips by simply naming them in groups. For example, a clip titled 01-001 will be placed on the timeline directly ahead of one titled 01-002. After the numbers, you can name the files with something more descriptive to help you remember. Most editing software also lets you add comments to the database that makes up your clip bin, so go ahead and use that if you find it useful.

Most editors also have a way to pre-set the duration of a still. The result of our batch insert of the Section One still shots will be a series of 6-second clips on the timeline.

Next, we’ll insert the video clips for section one onto the timeline. If there are pre-built title screens, other graphics, sound effects or whatever, they get placed on our timeline next. We’ll need to start paying attention to the different tracks on the timeline so that titles that will be superimposed over video will be displayed properly.

Order on the Timeline

Now that our clips are on the timeline, we can look at them and decide how to move them around into a more pleasing order. One way to time your edits is by looking at the soundtrack. The tempo of our music track can often be seen as spikes in the audio waveform. Lining up the cuts between the images and video with the spikes in the waveform gives you an automatic way to edit.

Many beginning videographers start by doing their cuts on the beat in the soundtrack. But let’s look closer at our content. The first still image (figure 1) is a group shot. There are quite a few family faces in this photo compared to the photo in figure 2, which is a still of Aunt Martha playing solo. Figure 3 is a close up of her hands on the keyboard. The video is a talking head clip of Aunt Martha talking about the fun the family always had gathering around the piano at the holidays.

Rather than just marching through the photos, let’s look at how a creative editor might use them to help the audience absorb the full content of the visuals and build a more effective shot progression. The opening still image covers two measures of the soundtrack, giving the audience more time to look at the multiple faces in the photo. Photo #2 has been shortened and, halfway through, it’s been composited with the keyboard shot. Next, the talking head replaces the single shot of Aunt Martha, so that she can make her comments.

The result is that the same information is presented to the viewer in the same amount of time, but we’ve given more time to the complex shot with the multiple faces and given the audience a more interesting edit. The video no longer simply marches to the beat of the underlying music, while it is still totally in sync. Also notice the split edit where Aunt Martha starts talking before we see her. This is a common technique that helps increase viewer interest by providing them with new information (the live audio) before seeing the clip associated with it.

Another skill that makes many beginning editors feel uncomfortable is determining exactly where to make a cut between two scenes. In a non-linear edit system, it’s easy to experiment and fine tune edit points using the trim function.

The editor sets up In and Out points and then plays that edit, plus a good chunk of the material coming into and out of the edit, again and again (i.e. loops it). The Trim function allows the editor to move the In or Out point of a clip in small increments using keyboard commands, all the time watching the resulting edit and making adjustments until it feels just right.

If you’re still unsure of an edit, another helpful trick is to play the original video clip and mark your In or Out edit points on the fly. This means just playing a clip in real time and marking your edit where your instincts tell you the edit should go. One famous editor has said that when he watches the same clip three times in a row and hits the same exact Edit point three times, he knows he’s found the perfect place. Remember that when you are trimming clips on the timeline, you aren’t really changing the file itself. Edit points are only relevant to the project and your source material remains unchanged.

The Order to Retreat

It’s also critical to learn to see the big picture, even when you’re working on the smallest edit. With the kind of precision control that modern software offers you, it’s easy to get caught up in trimming a frame here or a frame there and forget to stand back and watch a complicated sequence in its entirety.

There’s nothing more frustrating than working for an hour on a small sequence, tuning it up until it’s nearly perfect, and then discovering that your video is too long. Then you have to face the realization that the best thing you can do for your video is to simply remove the entire section that you’ve just perfected. Be cruel and merciless and cut where you can.

So, the bottom line for editing is that there is not one right way to do it. The whole object of the exercise is to arrange and trim your material in a way the keeps your audience involved in the presentation. Accomplish that, and your edit is right. No matter how you got there.

Next Month: Graphic it! Altering the Material and Adding Titles and Graphics.

[Sidebar: The Importance of Capture Settings]

Modern editors don’t need to render material on the timeline that remains unaltered. If you ever find yourself rendering even the simplest cuts-only sequences, you need to check your project settings. The problem is likely that your clip settings don’t match the capture settings you established when you opened up your new project. In most situations, you should only have to render title sequences and transitions between clips.

Every editing system works a bit differently in terms of specifying what kind of edit you’re doing when you drop new material over old. In some modes, you’ll insert the new into the old, pushing the previous material downstream (i.e. ripple edit). In another mode, the same action might simply place the new content on a new timeline layer, overwriting the old clips with the new ones. Both kinds of editing actions are valuable and as you get to know your software package, you’ll learn how to switch among the various editing modes.

There are often a number of ways to select multiple clips and move them as a group on the timeline. In the most usable software programs, the technique mirrors the behavior of your operating system. In other words: CTRL+click (OPTION+click on a Mac) to select multiple individual clips. You can also click and drag a selection area around your multiple clips in some environments or SHIFT+click to select a range on a Windows PC. Some editors have other kinds of selection tools that allow you to move clips more efficiently.

Editing: Editing from Start to Finish, Part 3 of 4