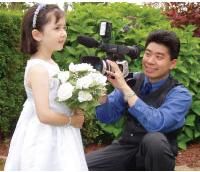 The name Danny Sayson should be familiar to regular Videomaker readers. As a multiple-time winner in several categories of Videomaker‘s annual video contest, including Best Event Video (2006) and Best Commercial (2004), he’s been a feature in this magazine before.

Sayson owns and operates Sayson Video Productions in British Columbia, Canada, an outfit specializing in wedding, special event and promotional videography. His wedding videos are a far cry from the stodgy, soft-focus, static-shot pieces you may be familiar with, and his fresh and engaging approach to capturing a couple’s special day explains his critical and commercial success. Sayson separates himself from the pack by making wedding videography a feature of the event itself, rather than simply a record.

One doesn’t normally associate the rough-and-tumble of a hockey game with a wedding, but it was Sayson’s work behind the scenes with the Vancouver Canucks NHL franchise that inspired several of his innovations. The differences between wedding and sports videography, Sayson explains, aren’t so great. “Both… have actions that occur quickly and allow you only one take,” he says. “You learn to anticipate action and react quickly to things that happen unexpectedly.” On-ice player introduction video montages inspired his Bridal Intro videos. The hectic pace of instant replays and same-game highlight reels were the source of his Same Day Edit videos, where highlights from a wedding ceremony are shown just a couple of hours later to a surprised audience at the reception. In fact, his winning entry in Videomaker‘s 2006 Short Video Contest, The Wedding of Lorna & William, is one of those videos. It was edited on-site using Adobe Premiere immediately after shooting, while the wedding party was busy shuttling from church to reception hall.

The technology that allows same-day editing wasn’t always available, of course. Back in the 80s, when Sayson started out videotaping events at his church on a volunteer basis, he would “literally shoot the wedding and hand [the client] the videotape afterwards.” Since then, he has been very sure to stay ahead of the technology curve, one of the things to which he attributes his success. Another key to staying on top of the industry is education. “Regardless of how long I’ve been in the business, I continue to be a student of the craft,” Sayson explains. “Because the technology is so readily available today, it [is] important to separate yourself from your competition through your artistry and editing techniques… For me, I strive to make the current video I’m working on better than the last one I just completed.” His latest project, a travel series highlighting West Coast tourism destinations, is an example of how Sayson continues to expand his scope and push his personal envelope.

His advice to aspiring event videographers reflects his dedication to self-improvement: “You must continually strive to educate yourself through trade magazines, websites, trade shows and training seminars like the WEVA EXPO.” Also, success in this competitive field requires “commitment to strive for excellence and creativity in every video you produce.”

Mike VanHelder is a freelance writer who has a background in information technology, as well as a sideline in film production.