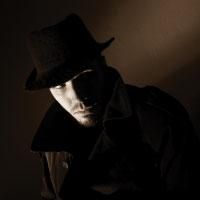 November. The days are getting shorter, the air is crisp and the mood is dark and forlorn. These are the perfect ingredients for film noir shooting.

In the 1940s and 50s, a film style called film noir filled the silver screens in America. Movies such as The Maltese Falcon and Touch of Evil portrayed the dark side of American life, full of urban crime and vice. Film noir had a distinct style, with shadow-filled low-key lighting. Night ruled in film noir, the shadow more important than the light.

In this column, we will take a look at the basics of good film noir lighting and prepare you for a great shoot in the dark November night.

To be able to light in the film noir style, you need to remember three things about lighting.

First of all, to get a good crisp shadow, you need a small intense light. This is called hard light. You can create hard light with a small, very intense lighting fixture. The sun is the best example of a hard light. Step out on any sunny day, and you will see the crisp shadows created by this very intense but small light source. Reflector spots, Fresnels, theatrical lekos and ellipsoidals make great hard lights. A bare bulb in a socket is also a hard light, but usually it does not provide enough light to give you the effect you need to create film noir-style scenes.

The final thing you need to remember about lighting is that you need to use more light to get solid crisp blacks and stark whites. Just because it seems that a bare bulb in the ceiling is lighting a scene doesn’t mean it is. A lot of new videographers are so enamored of their camera’s low-light capability that they think they can get away with natural light or lighting a scene with everyday light bulbs. This is a long way from reality. If you shoot with natural light or the bulb in your living room lamp, you will end up with a picture that is full of dull grays and gray whites. You need to add light to the scene to increase the contrast between the dark and light areas. You want your blacks and shadows to be crisp black. You want your whites to be white. To get this, you need a very good low-key lighting setup. You can still make it look like a single bulb is lighting the scene, but the single bulb will be a 1K Fresnel or reflector spot mounted near the ceiling with its light beam very tightly focused.

Film noir lighting is actually quite simple, once you accept that shadows are your friend and that the single light source you are using can create wonderful cinematic lighting. One of the hallmarks of film noir lighting is the intensity of the darkness. To be successful in creating the film noir look, you must pay strict attention to control of your light source. Think pools and shafts of light, not lighting specific areas. Think one light, not three.

The light in film noir lighting is very crisp and precise. You should focus your light to fall exactly where you planned and nowhere else. Try to avoid spill light as much as possible. Remember, you are trying to achieve crisp blacks and stark whites.

Set up your light so that you might catch just the edge of your character’s face or hat or gun. Maybe you want to see the character silhouetted against a splash of light in the background. Perhaps you want to see just the smoke from a cigarette as he waits in the alley for his victim. You can use the light coming through a window blind to cast striped shadows on your character’s face and the background. In film noir lighting, it is not important to be able to see your characters’ faces. The dramatic hard low-key lighting makes the identity of your characters less important than their actions in this dark and sinister world. It is a world of shadows – not light. You have to remember that.

In film noir lighting, you want to constantly think about the shadows. As a character walks past a wall, where do you want his shadow to fall? At what angle? Where is the main light coming from? When you set up your light, think about the action and how you can use the stark contrast created by the sharp shadows to your advantage.

Remember, to get sharp, crisp shadows, you need intense hard light, so that you can close down your iris and get crisp dark blacks.

Setting up a film noir scene takes a good deal of planning and thought. To begin the process, you need to really know the scene you are going to light. What is the action? What emotion are you trying to portray? If there is movement, how do you light it so that the movement is dramatic and works with the film noir lighting style? Once you have diagnosed the scene, it is time to set up your lights. Let’s take a look at a couple of scenarios.

Let’s say you want to create a scene like the end of the film, The Big Combo, lit by cinematographer John Alton. In this scene, you find a man and a woman silhouetted against a foggy background. The figures of the man and woman are crisp black against the brightly-lit fog.

To begin with, always remember that, if you want to see fog (or cigarette smoke or any other type of smoke), you need to light it from behind. In this scene, all you need is one very intense light source (2K or more) and a fog machine. Center your light setup so that it is between the man and the woman, and fill the background between the light and the actors with a bank of fog. The light will light up the fog, diffusing the light and making it very big and bright, and the actors will be in stark silhouette against the bright fog. Make sure the fog does not go in front of the actors. If you use a telephoto lens, you will be able to put some distance between the characters and the fog, so that their silhouettes will remain crisp black against the light.

If your scene is someone walking down the street next to a wall, you can set up a series of intense lights just out of the shot and slightly behind the action. This will cast the shadow of your character slightly ahead of him as he walks down the street. Remember that shadows move. As the character passes the light source, the shadow will go from behind to in front and will move farther in front the farther he gets from the light source. This can add drama to a scene, as the shadow seems to be moving faster than the character – a great subliminal increase in desperation in a chase scene!

A lot of film noir pieces use window blinds to create stark contrasts and shadowy lighting to an interior scene. To create this effect, place a very intense hard light (1K will do) outside a window, and slant it so that it mimics the light source, be it a street lamp or the moon. Partially close the blinds to get the desired striping effect on the wall and across your character’s face. Make sure your actor is very aware of the light, and that he moves his face so that the light hits his eyes. You can also create this effect in the middle of a room just by hanging a window blind in front of your light source and flagging the light so that there is no spill light reaching the scene.

Always remember when lighting a film noir-style scene that you are working with shadow as well as light. Light only what you want your audience to see. Make sure you use intense hard lights, so that the contrast between the blacks and whites is stark, with few grays in between. Create drama with your shadow placement and movement. Most of all, dig into your imagination, and use your lighting skills to create a visual world that takes your viewers far beyond the obvious and into the world of shadow and light.