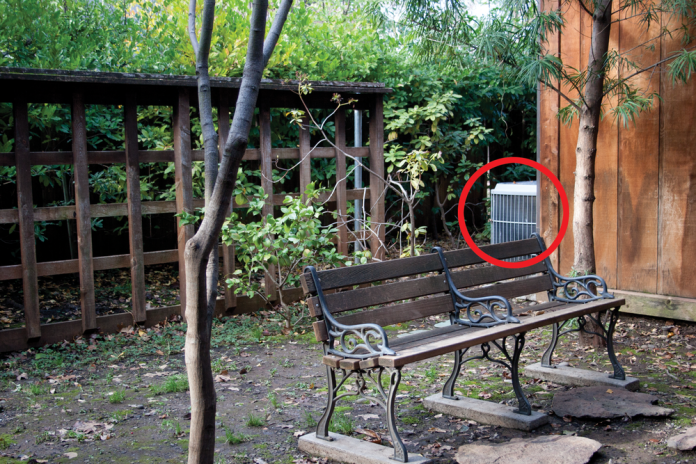 You have your fancy on-camera expert, your fancy DSLR that does 60 frames per second at a million megapixels, and some very fancy lighting equipment in the form of those awesome LED panels, but all anybody can think of when they look at your video is why are all those dirty dishes on the table behind that guy? Is anyone going to finish that sandwich? It’s going to get ants.

Good lights, sound, and a clear, sharp picture are no-brainers; everyone who’s had a Video 101 class or paid any attention while watching TV thinks about those. A good background, however, is often forgotten. Every time you walk onto a possible set, repeat this: At the very least, a background should not detract from your video. At best, it should add to it.

When scouting locations, be on the lookout for backgrounds that add something to your story. Are you interviewing a sports figure? How about a playing field behind him or her? Consider camera angles that show some people playing or practicing in the background, but keep them small, and slightly out of focus. You don’t want competition, you want accents. Is your interviewee/speaker a physician? A laboratory in the background says, “Science!” Showing the hospital they work in behind them says, “Professional!” A wall of diplomas says, “Educated!” These all add an element to your story that you won’t need to tell in other ways.

Consider everything in the immediate area – did you pass a waterfall on your way in? Is there a great cityscape that you can see from the roof? If your subject’s office is a mess, what about the door? Can you zoom in tight on something?

What makes a good backdrop? Things to consider.

You have more options if you can light it yourself. Being able to control the level of light on everything in your shot is a glorious thing. You can decide how bright the subject is in relation to the background and how much light you’re going to use on everything. This isn’t always the case. Sometimes one light is predetermined (perhaps it’s sunlight) and you need to balance that with your own lights to create the desired effect.

Some action can be good, lots of action can be bad. Some kids practicing hockey behind the subject can be soothing, but show twenty kids attacking one another with sticks, fists and skates in a bench-clearing brawl and nobody’s going to focus on your talent.

Watch out for words and logos. Ever watch a reality TV show and someone’s wearing a shirt with the logo constantly blurred out? Text is tricky since sometimes you do and sometimes you don’t want text in your background. If you’re interviewing the president of an airline, their logo on the tail of a plane behind them can add to your story, but if it’s an unrelated or rival airline, your viewers will be confused and your subject may be annoyed.

Be on the lookout for backgrounds that you can control. We’ve all seen some TV journalist on location on live TV trying to report on something when a bunch of kids – or worse – adults, start photo-bombing them, jumping up and down behind them, waving, holding up “Hi mom!” signs or demanding, “What’s the frequency?” While filming the movie JAWS, director Stephen Spielberg was plagued by background problems – his fishing boat was supposed to be isolated in a lonely sea, but occasionally a sailboat would appear behind it and filming would shut down while it moved slowly from one side of the horizon to the other. Being able to yell, “Hey you kids! Get off of my lawn!” can be advantageous.

If you’re not sure what your backgrounds are going to be like, bring your own. You can buy paper or cloth backdrops from retailers like Adorama, Amazon, B&H or backdropoutlet.com which has a huge variety of backdrops made out of lots of different materials.

You can also make your own backdrop. Muslin is very popular but wrinkles easily. Backdropoutlet sells wrinkle-less (not wrinkle-free) backdrops out of a fabric they call Diamond Cloth, which is an extremely fancy name for polyester. That much-loathed fabric from the 1970s has found its use – check out your local fabric store. Hardware stores also sell canvas drop cloths at inexpensive prices – you can paint these, or use them as-is.

With your store-bought or do-it-yourself backdrop, you may need some backdrop stands or you may tape it to a wall. One is easier but the other is more reliable. Follow your conscience – and your luggage restrictions.

Just because you have a background doesn’t mean you’re set. There are some things you need to stay vigilant about.

A Lamppost sticking out of the head or telephone cable out of the ear. This is by far one of the most common background faux pas. For some reason, our eyes gravitate towards vertical objects centered behind people’s heads. For some other reason, this seems much more obvious when watching a video than when framing a shot. Don’t do it, it looks weird.

Do not use a bed sheet. Beds sheets are the worst fabric for a backdrop. They’re prone to wrinkling badly, first of all, but more importantly, everybody can tell it’s a bed sheet – it looks amateurish and you will be rightfully ridiculed. There are lots of alternatives, like curtains, or tablecloths, that drape better and are still available inexpensively.

If you have the time and option, lighting the background yourself is always what you want to do.

Bring the right lighting equipment. At the very least, you should be prepared for a typical three-light setup, with a key and fill on the subject and a light on the background. This will give you separation, make your subject pop a little and provide sufficient contrast between your subject and whatever is behind them.

Consider using gobos when lighting your background. A gobo, they tell me, stands for ”Go Between Objects,” which makes no sense to me. They should really be called an INFRO because it goes IN FROnt of your lights. A gobo (or “infro” as you may now call it, while sounding superior) is just something that goes between your light and whatever the light is landing on. They were used with great effect in many film noir movies where sets were minimal and budgets were cheap – shining a light through Venetian blinds suddenly adds a whole lot of complexity to an otherwise blank wall.

A gobo can be something more or less random in shape, like the leaves of a potted plant, or it could be a regular pattern (like Venetian blinds) or it could even be a person.

Lighting a white seamless set. This is one of the “Difficult Tasks” of videography and there are web pages devoted to it. A proper white seamless background is evenly lit with no significant fall-off. The trick to this is to light it with two lights crossing one another in the middle of the backdrop. So, use the left-hand light to light the right side of the background and the right-hand light to light the left side. The fall-off from each light will be in the middle, but it will be lit from both lamps. Here, some modifiers like large softboxes, can be very helpful in getting the most even light.

There’s almost always something behind whatever your camera is pointed at and because you’re excited about what’s up front, it’s easy to miss things that can distract from your final product. Have an awareness of possible backgrounds going into a shoot and always be prepared to light, move, or provide your own background if necessary. Having a good background can be just as important as having good sound or good lights.